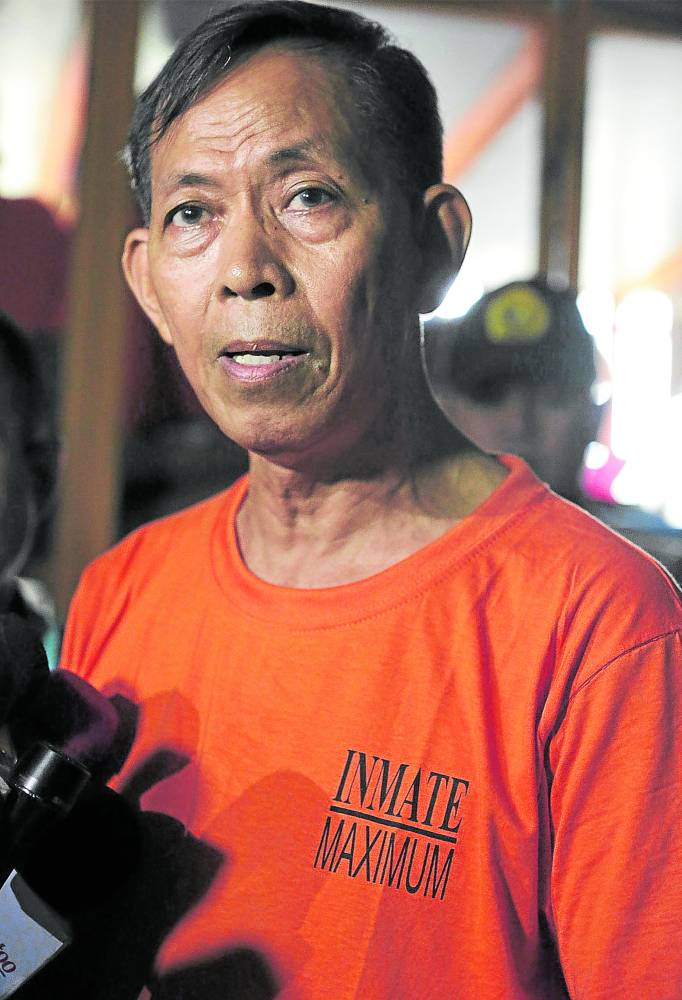 Retired Army Maj. Gen. Jovito Palparan, convicted in 2018 of the kidnapping of two disappeared University of the Philippines students, was able to grant a media interview—and Justice Secretary Menardo Guevarra is investigating how and why.

“The Department of Justice (DOJ) has no knowledge about the subject interview,” Guevarra told reporters in a text message on Thursday.

Asked if the interview was in violation of Bureau of Corrections (BuCor) rules, he said: “We’ll investigate.”

Guevarra later said the court that convicted Palparan had not received any request for permission for an interview.

He said the DOJ would check if Palparan’s case was on appeal, noting that “it may have a bearing on jurisdiction.”

The interview was aired on Wednesday by SMNI, a network owned by President Rodrigo Duterte’s spiritual adviser Apollo Quiboloy, who is wanted by the US Federal Bureau of Investigation on sex trafficking and other charges. It was shared on the Facebook page of the National Task Force to End Local Communist Armed Conflict (NTF-Elcac).

Palparan, sentenced to life on being convicted of two counts of kidnapping with serious illegal detention, was interviewed by NTF-Elcac spokesperson Lorraine Badoy and SMNI anchor Franco Baranda.

“How could a convicted felon serving life for depriving people of their basic human rights be able and allowed to give a media interview at the behest of government officials?” Edre Olalia, president of the National Union of Peoples’ Lawyers (NUPL), said in a statement.

Olalia wondered whether the court, BuCor and the DOJ were aware of the interview with Palparan, who was found responsible for the disappearance of students Sheryl Cadapan and Karen Empeño.

“This is not only thumbing one’s nose at our justice and penal systems but [also mocking] equal protection of the law, and may be laying the predicate to make him walk soon,” Olalia said.

Assistant Secretary Gabriel Chaclag, Bucor spokesperson, did not respond when asked if the bureau had allowed or provided assistance for the conduct of the interview.

But uniformed BuCor personnel could be seen walking in the background at least thrice during the two-hour, 43-minute interview.

Palparan, 71, was with two other inmates—Lt. Col. Felipe Anotado Jr. and SSgt. Edgardo Osorio, his co-respondents in the Cadapan-Empeño case.

In a statement, Concepcion Empeño and Erlinda Cadapan, the mothers of the disappeared students, condemned Badoy for interviewing Palparan in what she explicitly said was an attempt to “vindicate” him and his efforts in the anticommunist drive under then-President Gloria Macapagal Arroyo.

They described the interview as a “cheap, desperate attempt to vindicate criminals and human rights violators,” and questioned why it was allowed in the first place.

The mothers now lead Desaparecidos, an organization of families and victims of enforced disappearances. Their daughters have yet to surface 15 years after being abducted by Palparan.

“It is nauseating, to say the least, to see Palparan and this Badoy trying so hard to salvage the face of the ‘berdugo’ (butcher) for two hours, when Palparan is now a convicted criminal. The courts have convicted him, with overwhelming evidence and witness testimonies, for taking away our daughters. What a travesty of justice!” the mothers said.

Concepcion Empeño questioned why Palparan was given “all the freedom to speak to the public.”

“What about our daughters? Did he give them a chance to speak and defend themselves? No!” she said.

Erlinda Cadapan said that in interviewing Palparan, the NTF-Elcac had “further sown injustice and rights violations.”

“To this day, Palparan continues to vilify our daughters and justify their abduction and disappearance. We say again, with the strongest conviction, that never should any person be subject to enforced disappearance,” she said, adding:

“This act of Palparan, and Badoy, is a cheap, desperate work of thieves. They stole our daughters, and those who continue to employ abduction and enforced disappearances should be held accountable for the rest of their lives, like what they did to us, as we remain searching for our missing loved ones.”

Badoy, the subject of complaints at the Office of the Ombudsman for her relentless Red-tagging of activists and even of Vice President Leni Robredo, told Palparan: “The reason why we have invited you is, of course, to honor you, to vindicate you, and to show the Filipino people the harm that the [Communist Party of the Philippines-New People’s Army-National Democratic Front] has done to us as a people.”

She said Palparan was a victim of communist propaganda.

“It was because of their collusion … and the lies that they spread about you and their collusion with these unprincipled politicians that these trumped-up charges were [filed against you]. That’s why this is where you are now,” she said.

In an interview on Feb. 19, 2020, Chaclag admitted that Palparan was serving his sentence, not at the maximum security compound of New Bilibid Prison (NBP) in Muntinlupa City, but at the Reception and Diagnostic Center (RDC) in the medium-security compound.

At that time, it was alleged that the retired general known to activists as the “Butcher” was receiving special treatment.

Chaclag then claimed that Palparan had no access to computers. He said even BuCor personnel had difficulty connecting online because of the signal jammers in the NBP.

Palparan was put in the RDC on Oct. 3, 2018, and was to be moved to the maximum-security compound after 60 days.

“Our paramount consideration is the safety and consideration not only of Palparan, but also the larger population of PDLs (persons deprived of liberty) in the NBP,” Chaclag had said, citing intel on threats to Palparan’s life which could be “aggravated if he is mixed with the general PDL population.”

Per Chaclag, the RDC classification board might have seen the opportunity that Palparan could “contribute to the orderliness inside the prison…. [since] he is a former leader.”

AFP hit for ‘coddling’ Palparan 2 weeks after his conviction