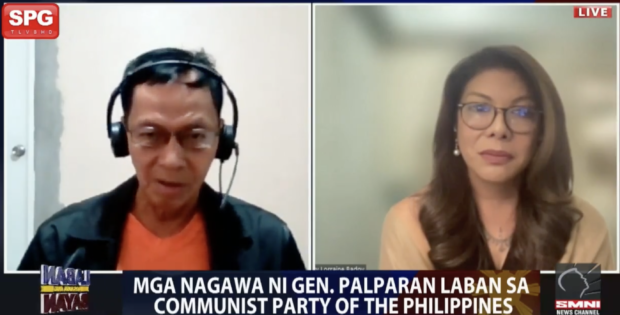 Badoy was among those who interviewed Palparan in a program aired on SMNI News Channel on Wednesday. The interview was also shared by the NTF-Elcac on its Facebook page.

At the start of the interview, Badoy said that among the reasons why they invited Palparan as guest is to “vindicate” him.

“We are so happy that you could join us. The reason why we have invited you is of course to honor you, to vindicate you, and to show the Filipino people the harm that the CPP-NPA-NDF (Communist Party of the Philippines-National Democratic Front-NPA) has done to us as people,” she told Palparan.

“Mga sinungaling kasi ‘yan, sir (They are liars, sir). Alam natin ‘yan (We know that), and it was because of their collusion, it was because of them and the lies that they spread about you and their collusion with these unprincipled politicians that these trumped-up charges were [filed against you], that’s why this is where you are now. We want to hear from you,” she added.

Badoy also noted that the CPP-NDF-NPA is spreading “vicious lies” against the Armed Forces of the Philippines and the Philippine National Police.

“They spread these lies because it serves their propaganda. It serves their cause: fundraising, recruitment, and radicalization of our children, etc., and you were one of the victims of these communist terrorist groups, so we’d like the Filipino people to hear your story,” she further told Palparan.

For his part, Palparan said he hoped that their discussion would benefit listeners.

“To all of you, thank you for this opportunity and hopefully ‘yung ating audience, makinig at tingnan nila ang ating talakayan dito so that they can benefit and it will be for the good of them to all of us,” the retired Army general said.

(To all of you, thank you for this opportunity, and to our audience, I hope they will listen to our discussion so that they can benefit and it will be for the good of them and all of us.)

In 2018, the Malolos Regional Trial Court found Palparan guilty of kidnapping and serious illegal detention related to the disappearance of University of the Philippines students Sherlyn Cadapan and Karen Empeno in 2006.

Palparan was sentenced to reclusion perpetua, or 20 years and one day to 40 years imprisonment, and was ordered to pay P100,000 for civil indemnity and P200,000 for moral damages for each count.

Palparan earlier went into hiding following the issuance of a warrant for his arrest. He was arrested in Sta. Mesa, Manila, in 2014.