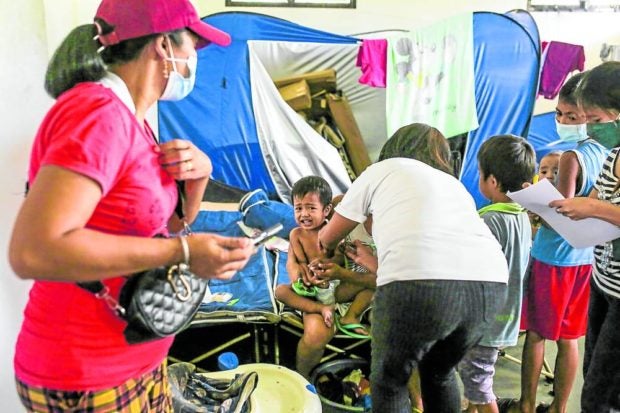 HEALTH CHECK | Government social workers record, for nutritional purposes, the weight and arm circumference of children of families sent back to an evacuation center in Juban town after Mt. Bulusan spewed ash anew on June 12. (Photo by MARK ALVIC ESPLANA)

LEGAZPI CITY, Albay, Philippines — Health officials in Juban town in Sorsogon province have been recording a number of respiratory illnesses in children after more than a week of exposure to ash spewed by the restive Bulusan Volcano.

Dr. Edric Vargas, in charge of the disaster risk reduction and management (DRRM) health section of Juban’s rural health unit (RHU), said most of the affected children were asthmatic or had preexisting coughs and colds.

“We were expecting more cases of acute respiratory infection because it’s flu and dengue season. They were triggered by the exposure to sulfur and irritation in the airways,” Vargas said in a phone interview on Monday.

Since the volcano’s first steam-driven, or phreatic, eruption on June 5, the RHU recorded 31 cases of acute respiratory infection, three had difficulty of breathing while another three patients had fever, Vargas said.

Vargas said they would be needing respiratory medicine for pediatric patients as their supplies were running low, including cetirizine, salbutamol syrup and relief for asthma.

He said they were hoping to get help from the Department of Health and would welcome donations from private institutions.

Currently, municipal nurses and midwives have been deployed to different villages to accompany village health-care workers in attending to the medical concerns of the residents, Vargas added.

As of Monday morning, 148 families, or 489 individuals, including 104 children, from the village of Puting Sapa were housed in three evacuation centers, said Arian Aguallo, information officer of the Juban municipal DRRM office.

About 2,877 families, or 11,348 people, were also affected by the ashfall in the other villages of Juban but have opted to remain in their homes.

The Philippine Institute of Volcanology and Seismology (Phivolcs) recorded another phreatic eruption early on Sunday that created a blanket of ash covering 24 of 25 villages in Juban town.

The ashfall also reached the 14 villages of Casiguran town, eight in Magallanes town, portions of Castilla and Pilar towns and Sorsogon City. Ashfall, while minimal, reached Legazpi City in Albay province, which is about 100 kilometers from Bulusan.

Bulusan Volcano was under alert level zero (normal) since August last year until it spewed steam-rich gray plumes on June 5 that rose about a thousand meters, prompting Phivolcs to place Bulusan under alert level 1.

Some evacuated residents in Puting Sapa, which is within the permanent danger zone, have opted to go back to their houses to clean up.

Gina Bolaño, 54, said they returned home on Monday morning to remove thick ash left by the eruption at their residence in Sitio Dayhag of Puting Sapa, leaving her two grandchildren and their parents at the evacuation center.

“I don’t want them to go home until we remove the thick layer of ash here, especially on our roof,” she told the Inquirer.

Their family was decamped on June 8 but evacuated again on Sunday afternoon, hours after Bulusan had another phreatic eruption.

On Monday, Phivolcs observed an “active steaming activity” of the volcano and detected 106 volcanic earthquakes, including 48 tremors that lasted for 20 minutes.

Phivolcs head and Science Undersecretary Renato Solidum, in a private chat, said the tremors reflect the active steaming in the volcano.

The volcano released 4,627 tons of sulfur dioxide and its plume, or voluminous emission from the crater, measured 500 meters high, drifting west-northwest of the province.

Due to the threat of more phreatic eruptions, all tourism-related activities were prohibited at the Bulusan Volcano Natural Park accessible through the town of Irosin; and the Bulusan Lake, and in all resorts in San Roque village in Bulusan town, said the province’s tourism and DRRM officials.

—WITH A REPORT FROM MICHAEL B. JAUCIAN