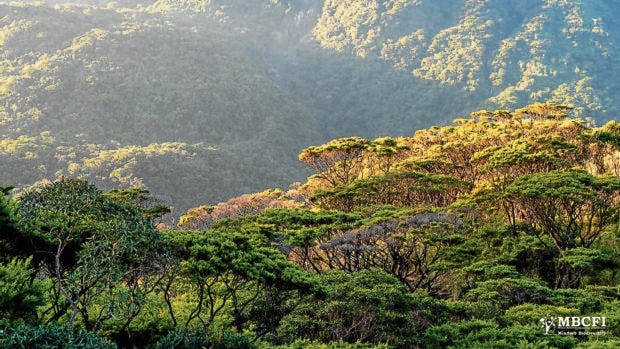 RICH IN RESOURCES | Mout Halcon, the highest mountain on Mindoro Island rising 2,586 meters above sea level, is rich in natural resources, has numerous rivers and waterfalls, and is home to an array of flora and fauna that locals want to protect from mining activities. (Photo courtesy of the Mindoro (Photo courtesy of the Mindoro Biodiversity Conservation Foundation Inc.)

CITY OF CALAPAN, Oriental Mindoro, Philippines. — An environmentalist priest here has lauded the passage of an ordinance extending the mining moratorium in Oriental Mindoro province for 25 years starting in 2027.

In a statement on Sunday, Fr. Edwin Gariguez, director of the Diocesan Social Action Center of the Apostolic Vicariate of Calapan, said the large-scale and small-scale mining moratorium was “a result of the public outcry of the people of Mindoro opposing the destructive mining in our critical watersheds.”

Gariguez thanked Perez and the provincial board for “continually respecting the voice of the Mindoreños.”

He said the local ordinance reflected the residents’ “strong stand” against mining in the province.

Gariguez, co-founder of the advocacy group Alliance Against Mining in Mindoro, joined the 11-day hunger strike of about 25 protesters, mostly Mangyans and farmers from Oriental Mindoro in 2009.

They camped out in front of the Department of Environment and Natural Resources (DENR) office until it agreed to conduct an investigation into the nickel project of Norwegian mining company Intex Resources in Mindoro, which was granted an environmental clearance certificate. The DENR indefinitely revoked the permit of Intex.

Among the grounds for the protests against the project was the location of its 12,000-hectare site, which is within a watershed and an ancestral domain area.

Gariguez helped bring the advocacy to the international community and was recognized in 2012 when he was awarded the Goldman Environmental Prize.

The recently passed ordinance is subject to the approval of reelected Gov. Humerlito Dolor.