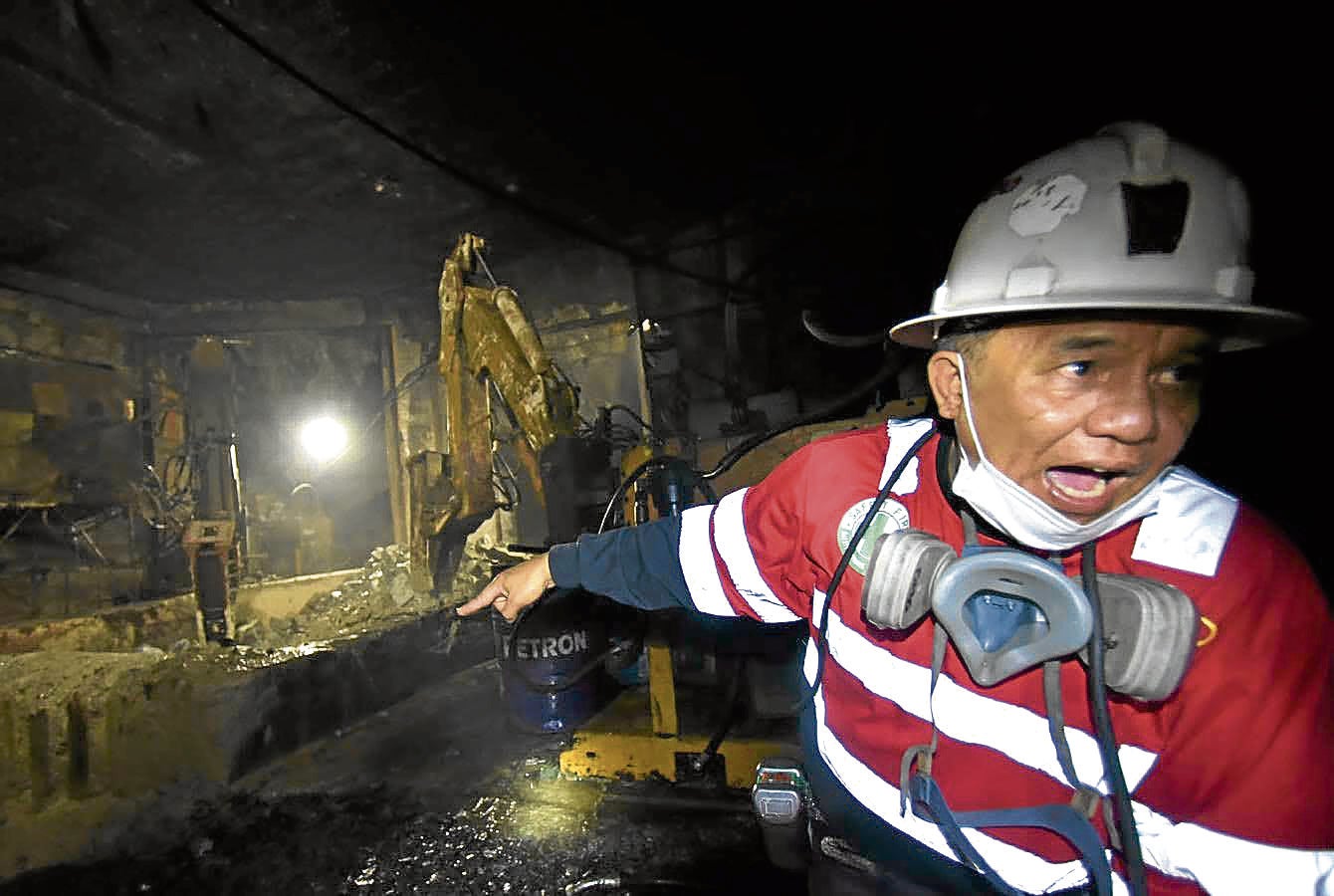 BIG HELP  – Mining companies in the country welcomed Executive Order No. 130, saying it was a big help “in this time of great national difficulty as a result of the COVID-19 pandemic.” File photo shows an operation of Philex Mining at the Padcal mine in Itogon, Benguet. —EV ESPIRITU

Duterte’s Executive Order No. 130 overturned a provision of Executive Order No. 79 (Institutionalizing and Implementing Reforms in the Philippine Mining Sector, Providing Policies and Guidelines to Ensure Environmental Protection and Responsible Mining in the Utilization of Mineral Resources) issued by then President Benigno Aquino III in 2012.

The provision imposed a moratorium on new mining permits or mining production sharing agreements until a new revenue-sharing scheme was put in place.

According to the President, the tax scheme for mining under the Tax Reform for Acceleration and Inclusion (TRAIN) Act has already satisfied the conditions of EO 79, which was also the argument of mining advocates.

In his order dated April 14, the President said the TRAIN Act had doubled the excise on minerals, mineral products and quarry resources from 2 percent to 4 percent.

He also noted that the country had tapped less than 5 percent of its mineral resources endowment. This suggests there is still room for new mi­ning projects.

The government may now enter into new mineral agreements, subject to compliance with the Philippine Mining Act of 1995 and applicable laws, Duterte said.

“In addition to ushering significant economic benefits to the country, the mining industry can support various government projects, such as the ‘Build, Build, Build’ program, by providing raw materials for the construction and development of other industries; and the ‘Balik Probinsya, Bagong Pag-asa’ program, by increasing employment opportunities in remote rural areas where there are mining activities thereby stimulating countryside development,” he said in the order.

The Department of Environment and Natural Resources (DENR) was tasked to come up with terms and conditions in the new mineral agreements that would “maximize government revenue and share from production, including the possibility of declaring these areas as mineral reservations to obtain appropriate royalties,” Duterte said.

The DENR was also directed to review existing mining contracts and agreements for possible renegotiation, to make them mutually agreeable to the government and the mining contractor.

The DENR and the Department of Finance are also directed to undertake measures to rationalize existing revenue sharing schemes and mechanisms.

The President also ordered the DENR to strictly implement mines safety and environmental policies, and ensure the implementation of the recommended measures of the Mining Industry Coordinating Council involving all mining operations.

Mining companies in the country welcomed EO 130, calling it a big help particularly “in this time of great national difficulty as a result of the COVID-19 pandemic.”

Companies belonging to the Chamber of Mines of the Philippines (COMP), the largest mining group in the country, described the moratorium as “a major roadblock to the huge potential of the Philippine mining industry.”

“Mining projects that will be allowed to operate following this development will provide additional government revenue in the form of taxes and fees, royalty fees and increase in export value, as well as employment opportunities for thousands of Filipinos, especially those in rural areas,” COMP said in a statement.

“We believe that adequate social and environmental laws, rules and regulations are already in place to mitigate the impact of mining on communities and the environment,” it added.About 15 mining projects are in the pipeline and awaiting permits, COMP president Gerard Brimo earlier said.

The chair of the House committee on ways and means, Rep. Joey Salceda, said the lifting of the nine-year ban would create millions of jobs particularly in the renewable energy sector.

In a statement, Salceda said Duterte’s move would favor the country’s long-term economic recovery and pave the way for the government’s bid for competitiveness in the electric vehicle and renewable energy battery sectors.

The Albay congressman said the Philippines was in a mineral boom and that world market prices of metallic resources that were in abundance in the country like gold and silver were high, benefiting the local industry and the economy.

Also, the country has the second largest reserve of nickel in Asia and a large reserve of copper, Salceda added.

These minerals, he said, would be crucial to the global push for electric vehicles.

“It can only mean well for our economic recovery, especially if we can set up the ground rules and the tax regime for mining well,” Salceda said. He advised the government to develop a plan in developing inputs to electric vehicles using the country’s mineral resources. Salceda said that in the past, renewable energy was not always relied upon because of fluctuations in supply, citing that when there was no wind, there was little wind-powered energy supply while solar energy required consistent sunlight.

With powerful battery technology, driven by nickel and cobalt that are both Philippine products, he said renewable energy could be stored better.

“In other words, we now have the power and the prospects to create millions of jobs in renewable energy, battery manufacturing, sustainable mining and related sectors. This will be a key driver of economic recovery post-COVID, but we have to be very wise with our policies,” Salceda said.

According to him, some 1.3 million jobs await the country in nickel-related industries over the next 10 years.

Salceda said the Philippines could become a global power in renewable energy and in the electric vehicle supply chain if the government would make the right policy moves.

The lawmaker proposed the enactment of the fiscal regime for mining so the issue on tax uncertainty could be removed.

Progressive groups, however, did not hide their dismay over the President’s directive.

“[We are] greatly shocked and deeply dismayed,” said Alyansa Tigil Mina (ATM), one of the most prominent antimining groups in the country. “ATM will not take this sitting down. We will mobilize all our members to intensify and broaden the resistance against mining, especially those who will benefit from this new policy.”

The group said the lifting of the moratorium would adversely affect the country’s water, food supply, forest, biodiversity, indigenous communities and fragile island ecosystems. It also described the EO as a “treachery against the future generations of Filipinos.”

“There are many other ways to restore the economy without exposing our natural resources to big mining interests,” the group said. “This is a betrayal against the people who resisted destructive mining and until now continue to fight for their right to livelihood and environmental protection.”

Pamalakaya warned that “the reopening of our resources to mining activities could allow foreign firms, such as Chinese [companies], to proceed with their large-scale mining escapade in the country.”

In 2019, Chinese miners were arrested for illegally mining black sand in Cagayan.

Duterte had previously attacked the mining industry, saying in 2018 that he wanted to put a stop to mining in the country after deadly landslides occurred in the wake of Typhoon “Ompong” (international name: Mangkhut).

He also said the government’s revenue from mining operations was not that big and was not enough to compensate for the suffering and agony the country experienced.