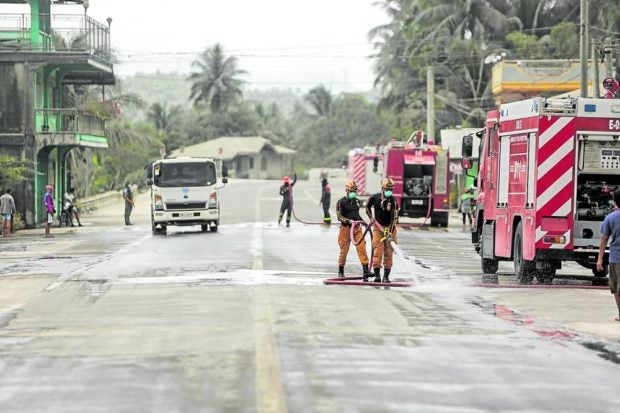 LEGAZPI CITY—Mount Bulusan erupted anew early on Sunday, its phreatic or steam-driven eruption stronger than the previous one a week earlier, sending residents back to evacuation centers as the volcano’s ashfall reached as far as this provincial capital of Albay about a hundred kilometers away.

According to Science and Technology Undersecretary Renato Solidum Jr., who is also officer in charge of the Philippine Institute of Volcanology and Seismology (Phivolcs), more villages were affected in the phreatic eruption that was recorded at 3:37 a.m. and lasted for 18 minutes.

“If you compare the counts (intensity) of signal, the record for this morning’s eruption is higher,” he said in a chat message when reached for comment.

Phivolcs described the eruption as an “explosion-type earthquake” that was felt at intensity 3 by residents of Barangay Añog in Juban town and at intensity 2 in Barangay Inglagadian in Casiguran — all within the volcano’s 5-km radius.

“A brief incandescence at the base of the eruption plume was reported in Barangay Inlagadian… By daybreak, multiple active vents at the summit could be observed spewing ash and steam to a height of at least 500 meters before being drifted to the northwest,” the agency said.

Phivolcs has designated a closer radius of 4 km as a permanent danger zone.

In the last 24 hours before Mount Bulusan exploded anew, 136 volcanic earthquakes were recorded, with ash plumes rising over 150 meters and spreading toward the provincial capital of Sorsogon City, about 50 km north of the volcano, and even to Legazpi City, which is 100.9 km further northwest.

Phivolcs said in its 4:20 a.m. bulletin that the volcano’s “alert level 1 status prevails,…which means that it is currently in an abnormal condition.”

The alert status was raised to that level on June 5, after Mt. Bulusan spewed steam-rich gray plumes that rose about a thousand meters.

Salvador Mendoza, spokesperson for the provincial government of Sorsogon, said ashfall reached the towns of Magallanes, Castilla and Pilar, besides Juban and Casiguran.

Apart from Añog, heavy ashfall was observed as well in the villages of Bacolod and Rangas, also in Juban, he said.

“All residents [were] advised to stay indoors and wear face masks,” she said.

Arian Aguallo, information officer of the DRRMO in Juban, said only five of the town’s 25 villages were not affected by the ashfall.

As of 1 p.m., at least 116 families or 366 individuals from Puting Sapa, the Juban village well within the volcano’s radius, were brought to two designated evacuation centers.

She said four families at the Tughan Evacuation Center were isolated, amid the continuing threat of the COVID-19 pandemic, after some members exhibited flu-like symptoms.

Jonnel Bolaño, a resident of Sitio Dayhag in Puting Sapa, said his family and neighbors packed their bags early Sunday morning and were just waiting for the local government to send a vehicle to bring them to safety.

He said they had been listening to the continuous rumbling from the volcano since dawn.

“It was loud like thunder and we heard a sound as if it was raining. That was ashfall pouring as thick as sand with the smell of sulfur,” Bolaño said.

He said his family was among those evacuated on June 5. But the Bolaños were brought home on Wednesday after the volcano showed minimal activity.

In Albay, all flights at Bicol International Airport in Daraga town were canceled.