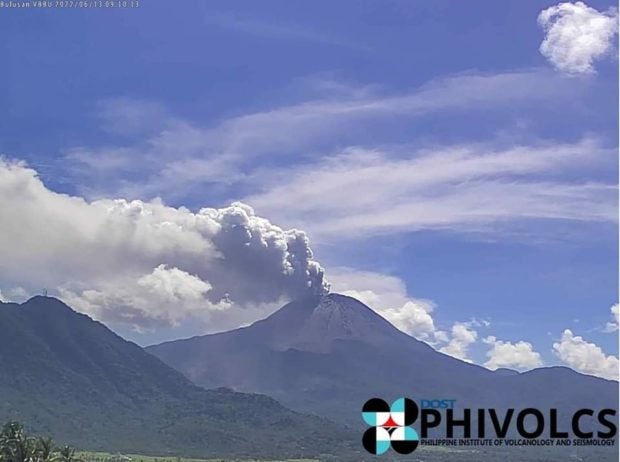 A thick plume of smoke can be seen coming out of the crater of Mount Bulusan on June 13, 2022. Image sourced from the Sorsogon Public Information Office / Facebook / Phivolcs

LEGAZPI CITY — Mount Bulusan in Sorsogon has recorded an increase in plume emission and a total of 69 volcanic earthquakes in the past 24 hours, the Philippine Institute of Volcanology and Seismology (Phivolcs) reported Tuesday.

In its 5 p.m. update, Phivolcs said the Bulusan Volcano recorded an increase in plume emission, from the previous 500 meters in the last eruption to 750 meters, emitting light ashfall that fell in some areas in Sorsogon.

Phivolcs said that after the phreatic eruption early on Sunday, June 12, Mt. Bulusan remained restive as degassing from its summit vents continues.

“Steam-laden plumes have been generated with periods of profuse volume and sporadic ashing that began at 4:30 a.m.,” it said.

Phivolcs said at 9 a.m., there was a noticeable increase of ash plumes that caused light ashfall in Barangay (village) Catanusan in Juban town while ashfall was observed on the upper northwest slopes.

The Bulusan Volcano Network also recorded at least five episodes of gray ash plume emission from the Blackbird Crater and profuse steaming from the summit vents at around 2:17 p.m.

As for its recorded seismic activities, the volcano displayed 56 sustained tremors that lasted between two to 19 minutes.

This should be expected, Phivolcs said, considering the volcano is still in its post eruption phase.

(Continuous post-eruption events are expected in Mount Bulusan since it’s still releasing energy. We’re hoping it doesn’t lead to another major eruption, but we still can’t rule out the possibility that it can happen any time at Alert Level 1.)

State volcanologists also reminded the public that entry into the four kilometer-radius permanent danger zone is prohibited, while going into the extended danger zone must be done with vigilance. Flying an aircraft close to the volcano is likewise not allowed.

Mount Bulusan on Sunday morning had another steam-driven explosion which affected the towns of Juban, Casiguran, and Magallanes.

Sorsogon Governor Francis Escudero, however, said the volcano’s latest eruption “majorly hit” only two of the 541 barangays in the province, but has since ordered the decampment of evacuees after the situation calmed down.