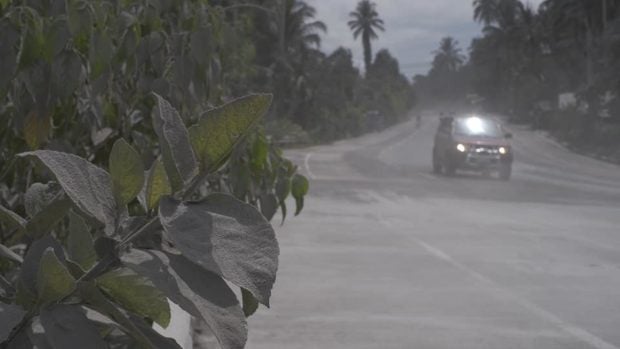 Ashfall from the June 12 eruption of Mount Bulusan can be seen on the plants and trees of a town in Sorsogon. Image from Sorsogon Provincial Information Office / Facebook

Escudero said the eruption recorded on Sunday morning “majorly hit” only two of the 541 barangays in the province and should not cause panic among residents.

“The latest one affected about five towns so far as the ash reaching these places are concerned. However, only two barangays were majorly hit by heavy ashfall. Dalawang barangay lamang [Only two barangays] out of 541 ang tinamaan kaya wala namang dahilan para mag-panic o magisip ng ano pa naman ang ating mga kababayan [so there is no reason for our residents to panic],” he said in an ANC interview.

“In fact, we expect to decamp already the evacuation centers within the day,” he added.

Around 337 residents remain in evacuation centers, according to Escudero.

He said there was no need to evacuate more residents following Bulusan’s latest eruption.

“There was no need to evacuate the rest,” he said.

“Only two barangays actually experienced ashfall that necessitated cleaning by the provincial and the national government,” he added.

The eruption lasted around 18 minutes, according to Phivolcs.

Meanwhile, the local government of Casiguran has ordered the suspension of classes at all levels on Monday (June 13) due to the threat of Mt. Bulusan.

In an executive order, Mayor Edwin Hamor ordered the suspension of classes and other activities in public and private schools, citing the possible hazards of another phreatic eruption of the volcano.

At least 14 villages in Casiguran were affected by the ashfall during the phreatic eruption on Sunday.

Earlier, the towns of Juban and Irosin also suspended the classes in all levels.