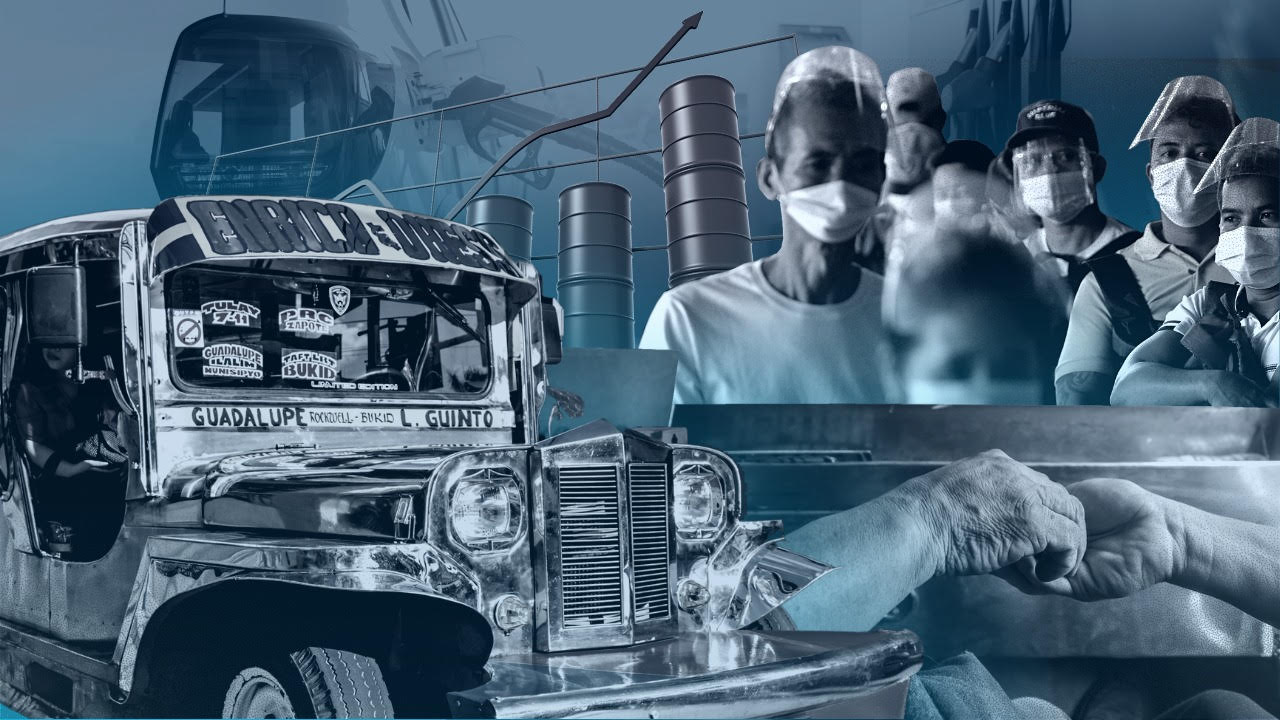 Mody Floranda, national president of the transport group Piston, told INQUIRER.net that while his group welcomed the provisional fare hike that was approved by the Land Transportation Franchising and Regulatory Board (LTFRB) on Wednesday (June 8), “P1 is not enough”.

“We’ve been waiting for this provisional fare hike. We’ve been calling on the LTFRB to bring back the minimum fare to P10, like in 2018. If we will take a look, a liter of diesel only cost P49 back then, now it’s already P82,” he said.

An order signed by LTFRB chairperson Martin Delgra III stated that starting June 9, the minimum fare for jeepneys for the first four kilometers would be P10 in Metro Manila, Central Luzon and Calabarzon. There will be no increase in fare for succeeding kilometers.

The LTFRB said that while it recognizes the impact of rising commodity prices and transport costs on the public, “it cannot be insensitive to the clamor and plight of the PUV operators and drivers who are responsible [for] ensuring a steady supply of public transport services”.

This, as jeepneys have the most vehicle units in the Philippines, carrying the most commuters on a daily basis. The LTFRB said in 2017 that there are 10 million jeepney commuters in Metro Manila every day. 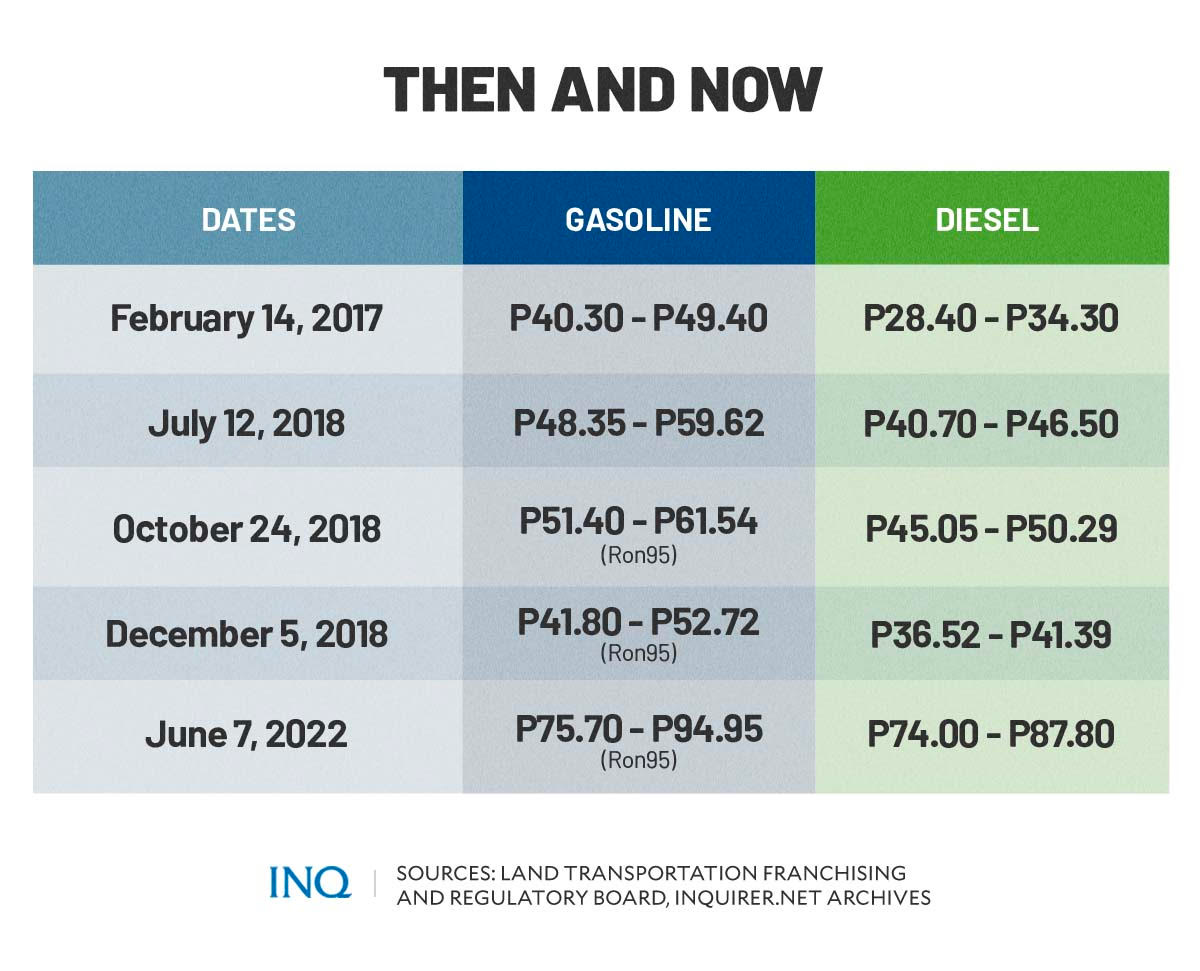 It was in February when jeepney drivers asked the LTFRB for a P1 provisional fare hike for them to cope with the almost weekly oil price hikes which, back then, already stood at P10.85 per liter of diesel, P8.75 per liter of gasoline, and P9.55 per liter of kerosene.

However, the LTFRB rejected the request, saying that it had “judiciously balanced the rights of the riding public who are mostly dependent on the public transport system vis-à-vis the right of the operators to financial returns”.

The Liga ng mga Transportasyon at Operators sa Pilipinas likewise asked for a “conservative fare increase” of P15 as the minimum fare for jeepneys for the first four kilometers.

“The continuously increasing inflation rate, which kicks up the prices of the basic commodities, pushed the PUJ stakeholders to the edge and can no longer provide 3x a day meal to their respective families,” it said. 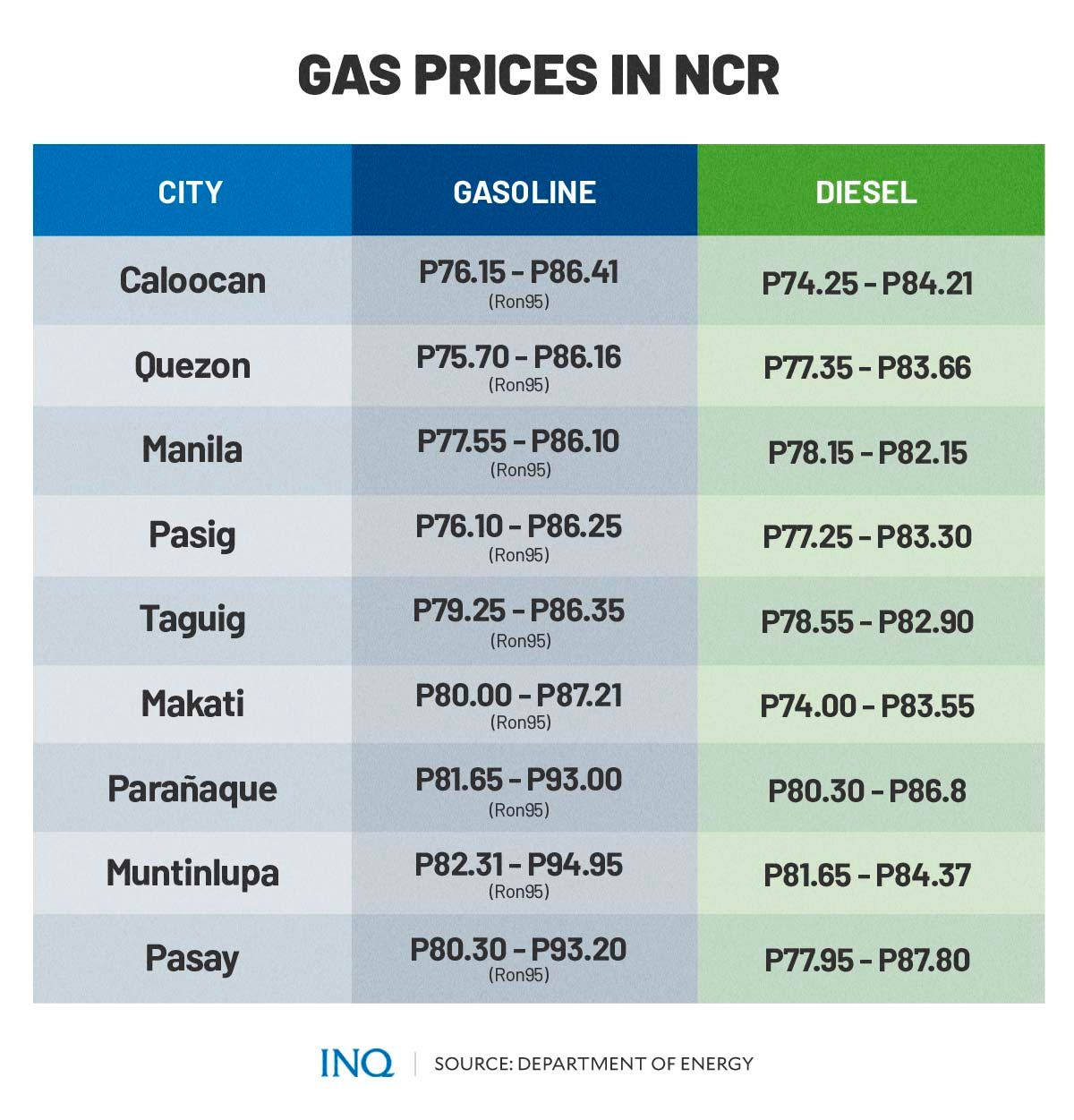 Last Tuesday (June 7), Petron, Caltex, Shell and Seaoil implemented another round of fuel price hikes—P6.55 per liter of diesel, P2.70 per liter of gasoline, and P5.45 per liter of kerosene. 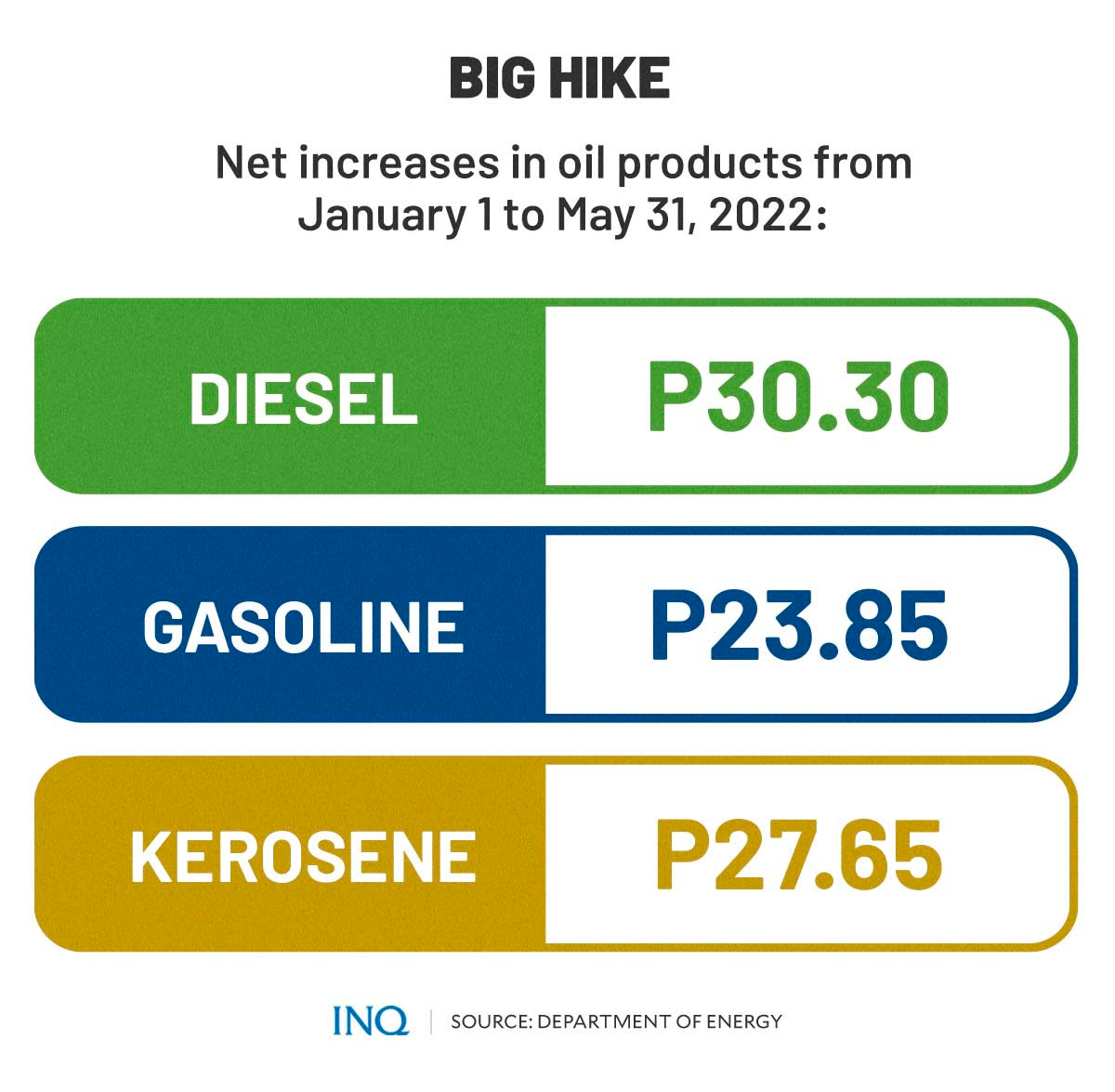 Here are the prevailing prices of diesel and gasoline (Ron95) in Metro Manila, based on Department of Energy’s (DOE) list on Thursday (June 9): 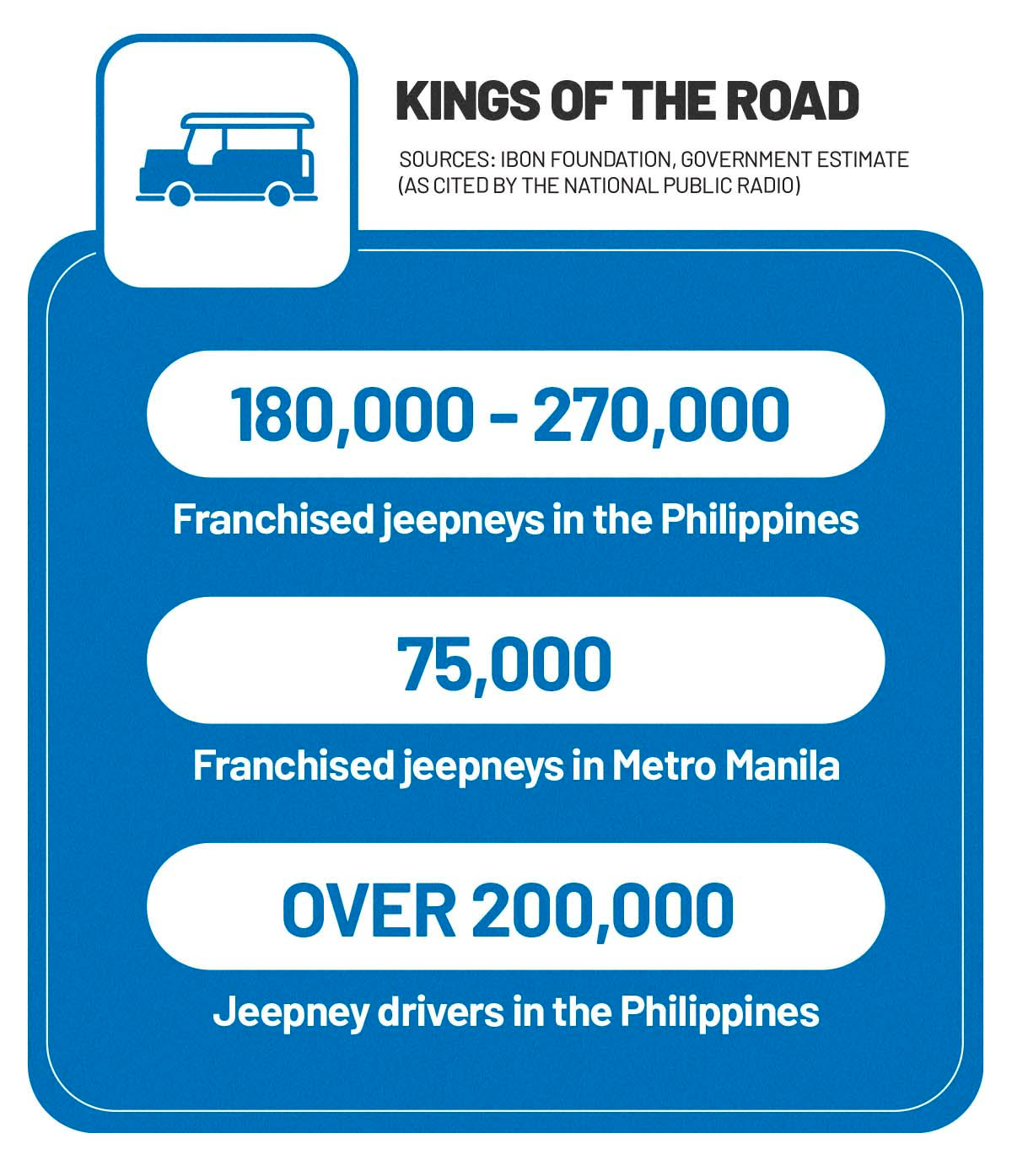 Back in 2016, the minimum fare for jeepneys was only P7, however, in February 2017, the LTFRB approved a P1 hike for the first four kilometers in Metro Manila, Central Luzon, and Calabarzon.

RELATED STORY: LTFRB: Minimum fare stays at P9 for now; bid to increase it to P10 up for decision

By September that year, transport organizations asked the regulatory board to increase the minimum fare for jeepney from P8 to P10 because of oil price hikes, saying that “it is just and necessary”.

It was only in July 2018, however, that the LTFRB approved a P9 minimum fare in the same regions. There were 12 hearings on the petition before a decision was reached to approve the hike.

More than a year later, a provisional P1 fare hike was granted by the regulatory board as oil price hikes continued. The petition for a P2 increase was rejected for lack of factual and legal basis.

However, the P10 minimum fare for jeepneys only lasted for a month since the LTFRB issued a resolution in compliance with Transportation Secretary Arthur Tugade’s directive to roll back fares amid the decreasing oil costs.

Since then, the minimum fare for jeepneys has stayed at P9 until the order issued by the regulatory board came out on Wednesday (June 8).

Floranda said that for the 12 to 18 hours that a jeepney driver works, there are 200 passengers on average. With P10 as minimum fare, a driver can bring home P2,000, but less expenses. 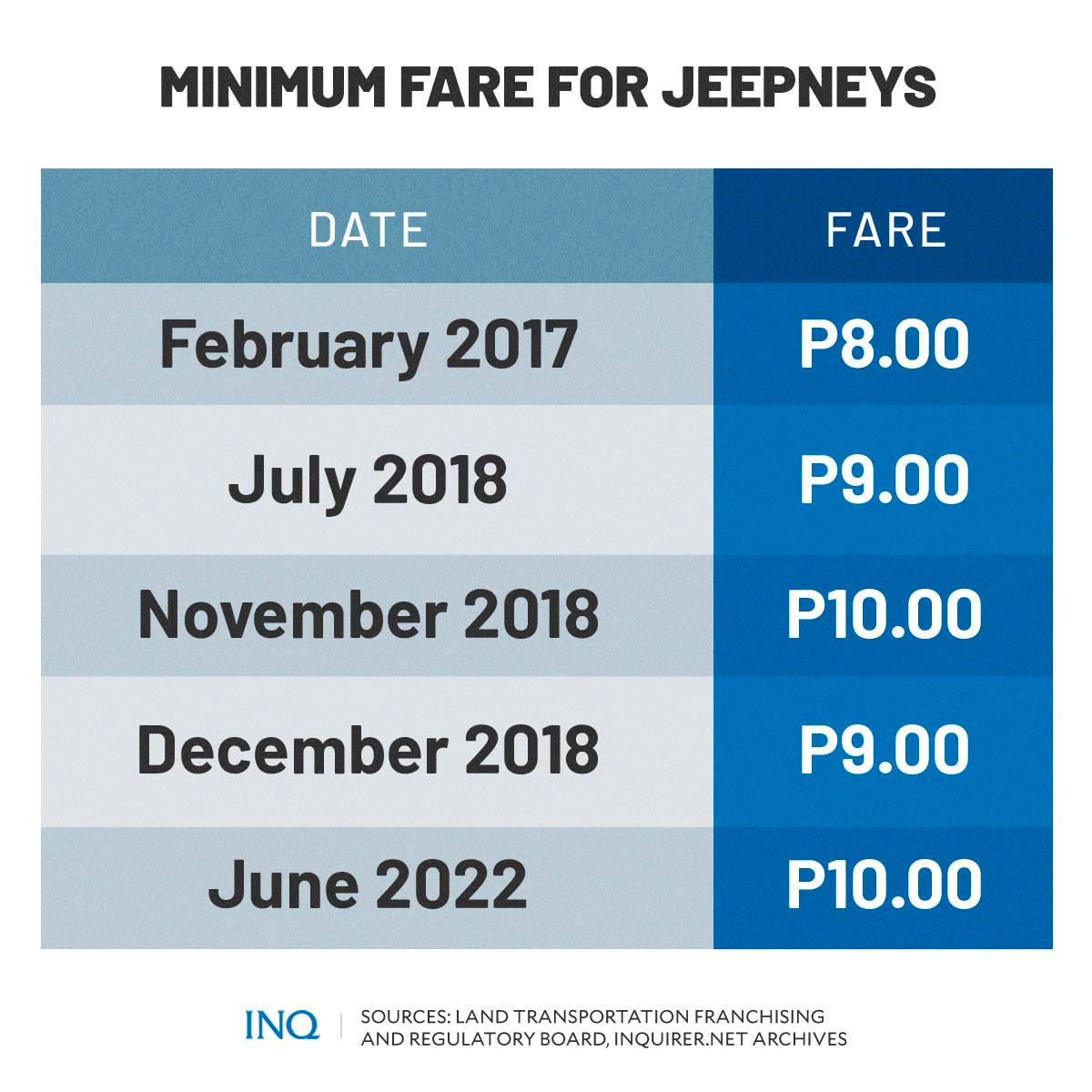 Because of the recent oil price hikes, jeepney driver Gaudencio Lizarondo told INQUIRER.net that some operators are now discouraging their drivers from going out, saying that “there’s no more income”.

Floranda said that in a “short route,” where drivers have a net income of P995 to P1,099 when fuel prices were still low, the driver gets P300 to P400 while the rest goes to the operator or the owner of the jeepney.

Lizarondo shared: “I know someone. Because of the oil price hikes, he is only earning P300 every day, prompting his wife to do business by selling bottled water on the road.” “If his wife will not help him out, nothing will happen because what he’s earning in driving is no longer enough for their family”.

As of April 2022, the think tank Ibon Foundation said that because of inflation, the family living wage, or the income that a family of five, especially in Metro Manila, needs to live decently, rose to P1,087.

The Philippine Statistics Authority recently announced that the inflation rate even spiked to 5.4 percent last month.

Based on price monitoring of the Department of Agriculture, here are the retail prices of basic food commodities:

Lizarondo said they want the government to lower oil prices: “Because fuel is too expensive, we can no longer recover our losses even with a P1 provisional fare increase.”

For Floranda, what jeepney drivers want is for President Rodrigo Duterte to issue an executive order to suspend the implementation of oil tax.

“This is what the next administration should consider as well,” he said.

However, the Department of Finance earlier said that suspending the collection of oil taxes will only force the government to borrow more money because of revenue losses worth P105.9 billion.

As a response to soaring oil prices, the LTFRB said it was able to distribute P1.17 billion worth of fuel subsidies to 68 percent of beneficiaries.

But the problem, Lizarondo and Floranda said, is that not all jeepney drivers are beneficiaries because not everyone is registered since they don’t have enough money to process their registration, especially drivers who were badly hit by the pandemic.