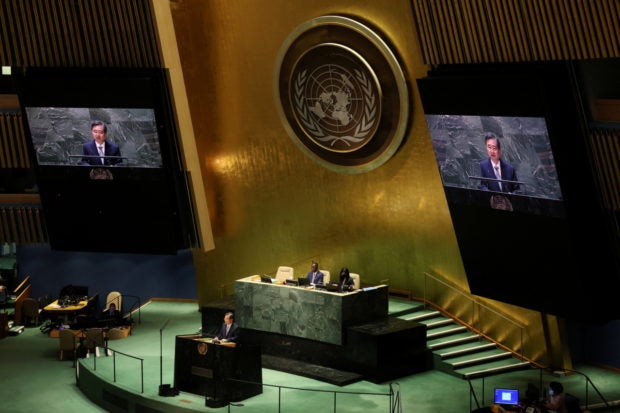 South Korea’s Ambassador to the United Nations Cho Hyun speaks during a meeting of the UN General Assembly after China and Russia vetoed new sanctions on North Korea in the UN Security Council, at UN headquarters in New York on Wednesday. (Reuters-Yonhap)

SEOUL — The two Koreas once again clashed at the UN over North Korea’s nuclear weapons program, with Seoul calling for an end to provocation and Pyongyang repeating its right to self-defense.

In the same General Assembly meeting held in New York on Wednesday, China and Russia defended their vetoes of the resolution to impose additional sanctions on North Korea, accusing the US of stoking tension on the Korean Peninsula.

“We urge the Democratic People’s Republic of Korea to stop such provocative actions, abide by all relevant Council resolutions and respond to the call for dialogue and peace on the Korean Peninsula through complete, verifiable and irreversible denuclearization,” Cho Hyun, South Korean ambassador to the UN said in the general assembly meeting, referring to North Korea by its official name.

Addressing the COVID-19 outbreak in the North, Cho reiterated Seoul’s willingness to provide unconditional humanitarian aid and underscored that the suffering in the country is due to its state policy, not international sanctions.

“The Republic of Korea stresses that the door for dialogue remains open despite the DPRK’s repeated provocations and threats, and our hand of unconditional assistance on the pandemic is still extended,” Cho said. Republic of Korea is the official name of South Korea.

“We have all witnessed how (North Korea) dissipated their scarce resources by blowing up expensive missiles in the sky.” 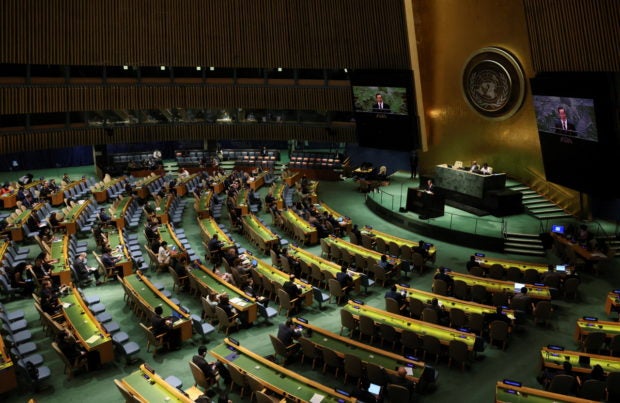 North Korea’s Ambassador to the United Nations Kim Song speaks during a meeting of the UN General Assembly after China and Russia vetoed new sanctions on North Korea in the UN Security Council, at UN headquarters in New York on Wednesday. (Reuters-Yonhap)

North Korean Ambassador to the UN Kim Song defended the country’s weapons tests, citing the UN Charter that stipulates “every state has inherent rights of individual or collective self-defense.”

“The measures that the DPRK is taking for bolstering national defense capabilities are an inevitable choice to cope with the hostile threats of the US within the scope of self-defense rights,” Kim said, blaming the US for creating conflict in the region.

Pointing to how the US conducts its own missile tests, Kim criticized the US as having double standards, and accused the US of making dangerous moves to deprive his country of its sovereignty and the right to existence and development.

On the US-drafted resolution, Kim denounced it as a breach of international law, adding that it was part of the US’ hegemonic policy.

“The structure of international relations is being transformed into one of a ‘new cold war’ owing to the unilateral and unfair bloc-forming external policy of the United States,” Kim said.

So far this year, Pyongyang has launched 31 ballistic missiles, including an intercontinental ballistic missile, marking its biggest figure in a single year. The previous high mark was 25 in 2019. Seoul and Washington also expect North Korea to conduct a nuclear test soon.

China and Russia also explained on Wednesday the reasons for their vetoes to the US-drafted resolution at the United Nations Security Council on May 27. Despite gaining 13 votes from the combined 15 member states of the UNSC, the resolution failed due to China and Russia vetoing the motion.

China’s UN Ambassador Zhang Jun said the US ignored North Korea’s efforts to suspend its nuclear development, and the US decision to return to the “old path of strategic patience and maximum pressure” led to “a complete deadlock.”

“The Peninsula situation has developed to what it is today primarily due to the flip-flop of United States policies, its failure to uphold the results of previous dialogue and its disregard for the reasonable concerns of the DPRK,” he said.

“There are many things that the US can do, such as easing sanctions (on North Korea) in certain areas, and ending joint military exercises (with South Korea). The key is to take actions, not just talk about its readiness for dialogue with no preconditions,” said Zhang.

The Chinese ambassador also said that his country had no choice but to veto the US-proposed resolution to alleviate the humanitarian and livelihood-related difficulties of North Koreans.

Anna Evstigneeva, Russia’s deputy ambassador to the UN, echoed Zhang to demand sanctions imposed on North Korea to be lifted, saying such restricted measures over the years have only worsened the situation on the Korean Peninsula.

US Deputy Ambassador Jeffrey DeLaurentis pointed to how North Korea had test-fired a record number of 31 ballistic missiles already this year, and that the country had violated multiple UNSC resolutions.

All of the missile tests took place as the regime “is finalizing preparations for a potential seventh nuclear test,” DeLaurentis said.

The US ambassador also reiterated that US President Joe Biden and Secretary of State Antony Blinken have stressed their intentions for dialogue with Pyongyang without preconditions.

“The United States is more than prepared to discuss easing sanctions to achieve the complete denuclearization of the Korean Peninsula,” he said.

The UNSC imposed sanctions on Pyongyang after its first nuclear test in 2006.

The Wednesday assembly opened as the first such session requiring the permanent members of the UNSC to explain their use of the veto.