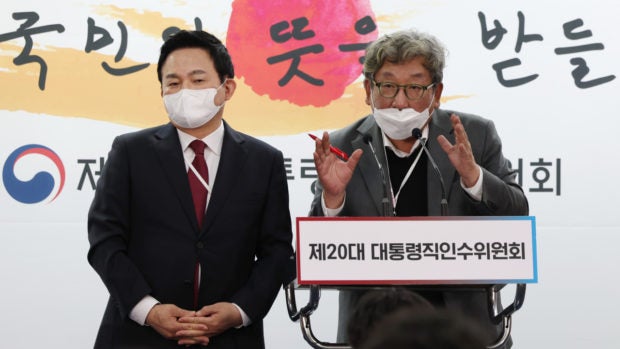 SEOUL — The transition committee working for President Yoon Suk-yeol said Tuesday that the incoming government will embrace nuclear power in its decarbonization efforts, signaling a major shift in energy policy the outgoing Moon Jae-in government had said has no place for nuclear power.

Won Hee-ryong, chief policymaker setting out Yoon’s agenda, said Korea had seen more emissions and would see soaring electricity costs because of Moon’s push to phase out nuclear power, which makes up roughly a third of the country’s power.

“We need to put in a right, realistic and prudent plan to achieve carbon neutrality,” he said, suggesting that Moon’s strategy to put behind what critics call one of the most efficient ways to generate energy had essentially backfired.

“So nuclear is back on the table along with every other technological tools that could help us cut carbon emissions. This shift in the energy policy is not to be understood as friction (between Yoon and Moon),” said Kim Sang-hyup Kim, a committee member supporting Won.

Kim – founder of the Coalition for Our Common Future, a foundation fighting climate change – said Moon’s plan to have renewables account for 70 percent of Korea’s power by 2050 poses a risk, as solar and wind power are not as reliable as nuclear power. Kim suggested that 70 percent was overreaching.

President Moon, who has repeatedly backed using renewables to meet Korea’s ambitious climate goal set at a UN climate summit last year, has said he will cut Korea’s emissions 40 percent by 2030 from 2018 levels and achieve net-zero emissions by 2050. Experts widely dispute how realistic the goal is.

The transition committee said the Yoon government will not go back on what South Korea promised the international community. But the country cannot keep fixating on it either, the committee added, saying efforts to deliver on the promise are important.

“Breaking the promise is unthinkable. But nothing is absolute, since the global climate campaign itself could see some change amid a shifting world order,” Won said, referring to the Ukraine war and COVID-19, all of which prompted a global energy crisis.

The transition committee said that the Yoon government, which begins work on May 10, will label nuclear energy “green” in its taxonomy, a list of climate-friendly activities the government approves, as early as August this year. The label change sets the direction of Korea’s energy policy to come.

The Yoon government will also encourage companies to double down on their commitments to environmental, social and governance principles in their operations, the committee added, saying state-run and private companies seeking renewable technology will receive support like tax breaks in return.

“We will bring in the best there is to help us combat climate change – someone bipartisan with international background and who knows what’s at stake from an economic as well as security perspective,” the committee said, referring to a commission advising Moon on green transition.

The 2050 Carbon Neutrality and Green Growth Commission, which Moon launched last year, is an advisory group jointly led by the prime minister and a civilian expert. Critics have called the coalition biased and ineffective, dismissing its role as inconsequential.