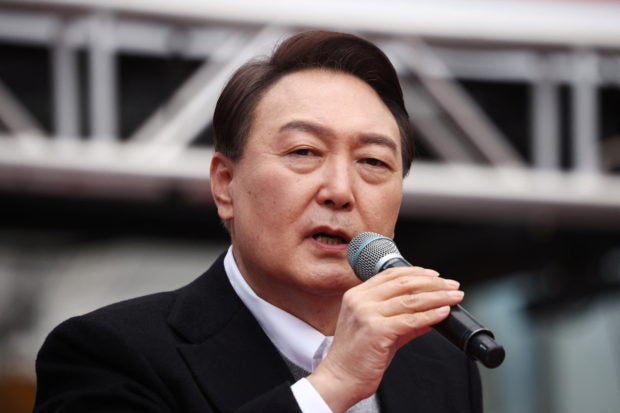 SEOUL = Conservative South Korean opposition candidate Yoon Suk-yeol was elected president on Thursday in one of the most closely fought races in recent history which will shape Asia’s fourth-largest economy for the next five years.

Yoon, 60, from the main opposition People Power Party, edged out the ruling Democratic Party’s Lee Jae-myung with 48.6% of the vote to 47.8%, with around 99.8% of the ballots counted as of 5:30 a.m. on Thursday (2030 GMT Wednesday). A formal announcement is expected to be made later on Thursday morning.

Yoon said he would honour the constitution and parliament and work with opposition parties to heal polarised politics and foster unity, calling the election a “victory of the great people”.

“Our competition is over for now,” he said in an acceptance speech, thanking and consoling Lee and other rivals. “We have to join hands and unite into one for the people and the country.”

At a separate ceremony with supporters, Yoon said he would put top priority on “national unity,” adding all people should be treated equally regardless of their regional, political and socioeconomic differences.

“I would pay attention to people’s livelihoods, provide warm welfare services to the needy, and make utmost efforts so that our country serves as a proud, responsible member of the international community and the free world,” he said.

Lee had conceded defeat and congratulated his opponent.

“I did my best, but failed to live up to your expectations,” he told a news conference, blaming his “shortcomings”.

“President-elect, I desperately ask you to overcome divisions and conflicts and open an era of integration and unity.”

Yoon’s five-year term will begin this month to replace incumbent President Moon Jae-in, who is constitutionally barred from seeking re-election.

The White House congratulated Yoon, saying President Joe Biden looked forward to working closely with him to bolster the alliance.

Yoon’s victory means a remarkable turnaround for the conservatives, which had been struggling to regroup since the 2017 snap election was held after the impeachment and ouster of then President Park Geun-hye.

Despite being a political novice, Yoon shot to fame after spearheading high-profile investigations into corruption scandals engulfing Moon’s aides.

Yoon has pledged to stamp out graft, foster justice and create a more level playing field, while seeking a “reset” with China and a tougher stance towards reclusive North Korea.

More than 77% of South Korea’s 44 million eligible voters cast ballots to pick their next leader, despite an unprecedented surge in new COVID-19 cases – with a record 342,446 posted on Wednesday.

The unusually bitter election campaign was marred by scandals and smears. Both candidates’ disapproval ratings matched their popularity as scandals, mud-slinging and gaffes dominated what was dubbed the “unlikeable election”.

The policy stakes are high for the country of 52 million with a rising global status, as it has been riven by gender and generational divisions, growing inequality and surging home prices.

Yoon also has to tackle some challenges including South Korea’s worst wave of COVID-19 infections and North Korea’s evolving nuclear and missile threats, while navigating an increasingly tense rivalry between China and the United States.

The preliminary results were in line with exit polls, but surveys from last week had projected Yoon’s edge after he secured the support of a fellow conservative who had been trailing a distant third and then quit the race.

Lee had initially maintained a tight lead, but Yoon began narrowing the gap and surpassed him after midnight when about 50% of the ballots were counted.