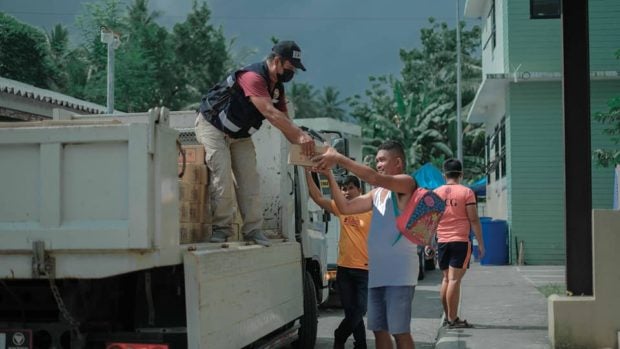 Residents near Mount Bulusan have been allowed to return to their respective homes after a few days of restive activities following its phreatic eruption last Sunday. Image from the Sorsogon Provincial Information Office

MANILA, Philippines — Mount Bulusan in Sorsogon had a total of five volcanic earthquakes in the past 24 hours as it remained under low-level of unrest, the Philippine Institute of Volcanology and Seismology (Phivolcs) said Thursday.

This figure shows a decrease from the 11 volcanic tremors reported Wednesday.

(The energy released by the volcanic quakes were also smaller and weaker since yesterday.)

He added that the local magnitude of these volcanic earthquakes ranged from from 0.1 to 0.4.

The state seismologists maintained that entry into the four kilometer-radius Permanent Danger Zone is prohibited, while going into the Extended Danger Zone must be done with vigilance. Flying an aircraft close to the volcano is also not allowed.

The Sorsogon Provincial government earlier confirmed that more than 100 evacuated families have returned home, three days after the phreatic eruption of Mount Bulusan.

However, the Provincial Health Office stressed the need for residents to continue wearing their face masks to prevent respiratory illnesses that may be caused by the volcanic ash.

Mount Bulusan on Sunday morning spewed ash in a steam-driven explosion that affected the municipalities of Juban, Casiguran, and Irosin.

While Mount Bulusan’s activities are relatively calmer compared to previous records, Phivolcs still warned the public of sudden phreatic eruptions that may still occur in the volcano.