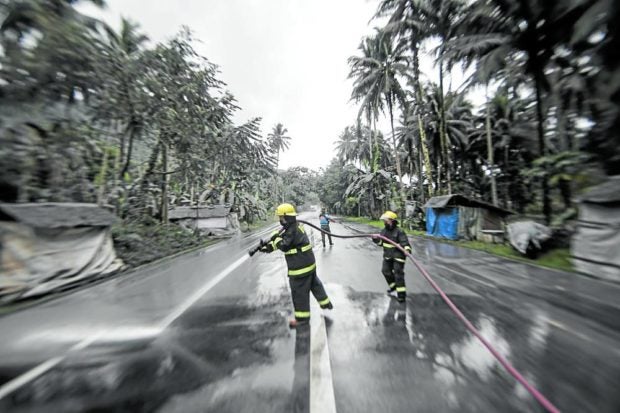 JUBAN, Sorsogon, Philippines — More than P17 million worth of vegetables, rice and other crops planted in Sorsogon province had been destroyed by the eruption of Mt. Bulusan on Sunday, according to the Office of Civil Defense (OCD) in Bicol region on Tuesday.

Bulusan spewed smoke and ash about a kilometer up into the sky for 17 minutes on Sunday morning, covering villages in Juban and Irosin town in ashfall.

But at a briefing to President Rodrigo Duterte on Monday night, Ricardo Jalad, executive director of the National Disaster Risk Reduction and Management Council (NDRRMC), said the eruption did not disrupt transportation, communications and water supply in the province.

Juban resident Ana Ballaster, 62, said she lost all the vegetables she had planted. “It was a waste. The chili, ‘pechay,’ and eggplants I planted wilted because of the ashfall,” Ballaster said.

An initial rapid assessment done by the OCD showed the crop losses reaching more than P20 million at noon on Tuesday. The figure, however, was revised to P17. 269 million later in the afternoon.

Mark Timbal, the NDRRMC spokesperson, told the Laging Handa briefing on Tuesday that a water source in Juban was contaminated by ashfall, prompting the local government and private sector to send water tankers and bottled water for residents.

Operations to clear the ashfall were underway, officials said.

In a phone interview, Science and Technology Undersecretary Renato Solidum Jr., head of the Philippine Institute of Volcanology and Seismology (Phivolcs), said heavy rain would help wash away the accumulated ash but residents should ensure to remove the pile of volcanic materials in their surroundings.

“Residents should not leave [these] near their residence as the wind could still blow it back to their area,” Solidum said.

Dr. Edric Vargas, who is in charge of the DRRM health section of Juban’s rural health unit, said heavy rain would help in washing down ashfall, particularly in Barangay Puting Sapa, the most affected village in Juban.

Jonilyn Redota, 33, said they chose to stay at the evacuation center to avoid contact with volcanic ashes that accumulated in the family’s house.

“We have yet to clean our house and the surroundings. It will be dangerous for my children,” she said.

Salvador Mendoza, spokesperson for the Sorsogon provincial government, said that as of Tuesday afternoon, 118 families (406 people) from Puting Sapa were still staying at Juban Evacuation Center and Gymnasium.

Solidum said that people living near river channels and streams should remain vigilant for possible lahar flow, especially in the southeast, southwest, and northwest sector of the volcano.

The volcano remained on alert level 1, or low-level unrest, as of Tuesday, but the Bicol DRRMC and the provincial government of Sorsogon were already planning for a worst-case scenario of a “violent eruption,” Jalad said.

Should this happen, the 4-kilometer permanent danger zone will be expanded to 6 km, the NDRRMC said.

In its 5 a.m. bulletin on Tuesday, Phivolcs said seven volcanic earthquakes were recorded by the Bulusan Volcano Network in the last 24 hours.

It said plumes reached up to 150 meters high, which were driven by the wind to the northwestern side. Solidum said unlike other restive volcanoes, Bulusan had no indication of rising magma that would lead to a more dangerous eruption.

Phivolcs earlier observed that the steaming in the summit crater and the northwestern summit vent was voluminous compared to the previous week. The hydrothermal activity was an indication of another possible phreatic eruption.

“Compared to days before the eruption, we recorded voluminous plumes which means there is an activity from the edifice,” Solidum added.

Albay Rep. Joey Salceda renewed his call to create a disaster-focused agency that would specialize on managing mass casualty situations in “sudden onset” emergencies, like the Mt. Bulusan eruption.

In a statement on Monday, Salceda, who has been pushing for the creation of a Department of Disaster Resilience, stressed the need for a “disaster-focused” agency that will specialize on surge capacity in responding to emergencies.

“I’m sure Sorsogon can handle it, but what matters is we are able to bring back to the national conversation the need for an appropriate institution for national capacity (to respond to disasters) and general welfare,” he said.

Aid pours in for evacuees displaced by Mt. Bulusan’s eruption