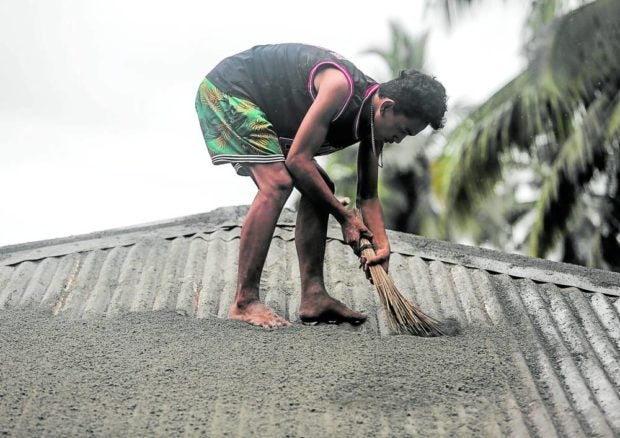 ROOFTOP CLEANUP | A resident of Puting Sapa village in Juban, Sorsogon, starts clearing ash that accumulated on his roof on Sunday afternoon, a few hours after the eruption of Mt. Bulusan. (Photo by MARK ALVIC ESPLANA)

LEGAZPI CITY, Albay, Philippines — Mount Bulusan in Sorsogon province seemed calmer on Monday even as the Philippine Institute of Volcanology and Seismology (Phivolcs) warned of another possible eruption after it observed steaming not only in the summit crater but also on the northwestern summit vent.

“This means that an explosion can also occur there,” Phivolcs head and Science and Technology Undersecretary Renato Solidum Jr. said in a phone interview on Monday.

He clarified that the observation that Mt. Bulusan on Monday was calmer might be correct “in a sense” if based on the perception of “no explosion happening.”

Phivolcs raised the status of the volcano to alert level 1 after it spewed steam-rich gray plumes that rose about a kilometer and dispersed wet ash as thick as two inches on its west side during a phreatic eruption on Sunday.

The explosion that started at 10:37 a.m. lasted for 17 minutes. Since then, 29 volcanic earthquakes have been recorded in the last 24 hours without another eruption.

Phivolcs said that alert level 1 or low-level unrest remained in place as it reminded people to continue to keep away from the 4-kilometer permanent danger zone as well as the 2-km extended danger zone “due to increased possibilities of sudden and hazardous phreatic eruptions.”

A ban on any aircraft flying near the volcano also continues to be in effect.

“It is possible that another phreatic eruption will occur in Bulusan so we have to follow and keep out of the permanent danger zone,” Solidum said at the Laging Handa briefing.

But he added that they have yet to see indications that the alert level would be raised further.

The Sorsogon provincial government has offered a food-for-work program for residents in ashfall-affected areas.

At a press briefing, Senator-elect Francis “Chiz” Escudero, the outgoing governor, said that Bureau of Fire Protection personnel from eight towns near Juban, the most affected municipality, had been deployed to flush out volcanic ash on the road, offices and other buildings since Sunday afternoon.

He added that residents would be tapped to hasten the clearing operations, saying they would be given food packs in exchange.

The cleanup drive, according to him, was among their priorities to avoid the collapse of structures with poor foundation, considering the volume of volcanic ash blanketing the area.

Escudero also stressed that the provincial government would not declare a state of calamity. Authorities have yet to assess the damage to crops due to ashfall.

As of Monday morning, at least 173 people, belonging to 47 families living within a four-to-six-kilometer radius of the volcano in Barangay Puting Sapa, had been moved to the Juban Evacuation Center in Barangay Tughan.

“If there is no eruption in two days and the affected barangays are cleared [of ash], we will allow the residents to go home,” Escudero said, adding that they were being provided with food and medical supplies.

Dr. Edric Vargas, who is in charge of the DRRM-Health section of the rural health unit of Juban, said that evacuees were in need of toiletries, face masks, alcohol, psychosocial first aid and basic medication for cough, hypertension, diabetes and other health concerns.

Some 87 policemen have been deployed to ashfall-affected areas in Sorsogon to deter looters.

“We are [trying to avoid] the looting that usually happens in areas where there are calamities, whether it is manmade or natural disasters. This is to ensure that the lawbreakers are not going to proliferate in the area,” Police Maj. Gen. Valeriano de Leon, the Philippine National Police director for operations, told reporters. He added that more policemen were on standby.

In a separate statement, the PNP said the Bicol police was on full alert following the eruption with the Bulusan police station continuously monitoring developments “for possible evacuation, search and rescue operations of affected residents.”

Aid pours in for evacuees displaced by Mt. Bulusan’s eruption

PNP on top of situation to prevent looting after Mt. Bulusan eruption