PNP on top of situation to prevent looting after Mt. Bulusan eruption 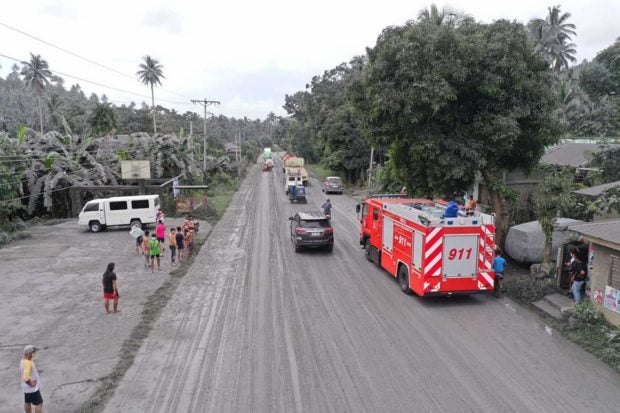 A thick layer of ash caused by the phreatic eruption of Bulusan Volcano blanketed the villages of Bacolod and Buraburan in Juban town in Sorsogon on Sunday. Photo from Sorsogon Provincial Information Office

MANILA, Philippines — The Philippine National Police (PNP) has assured the public that policemen are on top of the situation in Sorsogon towns following the eruption of Mt. Bulusan, saying security forces are enough to prevent the looting of stores in affected areas.

PNP Director for Operations Maj. Gen. Valeriano de Leon said in a press briefing on Monday morning that the PNP is trying to avoid looting, which he says often happens during calamities and evacuation of areas.

De Leon said that while the PNP understands the dire situations of the people affected by the volcanic eruption on Sunday, it is still not a reason to steal goods from stores.

“Of course, we are avoiding the looting that (is) usually happening in areas where there are calamities, whether it is man-made or natural disasters, this is to ensure that the law breakers are not going to proliferate in the area,” he told reporters in Camp Crame.

“Alam mo (You know) even in our Tacloban lessons and all other areas, survival kasi ito eh, ‘yong walang makain (this is survival, some have no food to eat).  But they are not — this is not their gate pass to loot an establishment(s) that are being closed,” he added.

De Leon also said that PNP has been in coordination with local government units and concerned agencies so that the police force can provide a quick response.  As of now, 87 officers have been deployed in the area, but the PNP official noted that more personnel are on standby.

“The Philippine National Police through our area police command in the person of soon-to-be Lt. Gen. Rhoderick (Armamento) is on top of the situation no.  There are 12 barangays that are affected, no casualty has already been recorded,” he said.

“But the phreatic eruption is being closely monitored and our coordination with the concerned agency to ensure that corresponding response from the [PNP] will be in place.  There are 44 families and 151 individuals that were placed in the evacuation areas.  As of now there are 87 but there are more standby forces ready to respond to eventualities,” he added.

Bulusan erupted at around 10:30 a.m. on Sunday, sending out steam and ash plumes of over one kilometer in height.  The eruption was caught on video by several netizens in the towns of Irosin and Juban, two of the hardest-hit areas in Sorsogon province.

Earlier, the Philippine Institute of Volcanology and Seismology said they recorded at least 29 volcanic earthquakes at Mount Bulusan.  Alert Level 1 is still up for the said volcano.

As of now, PNP said the challenge is ensuring that evacuated residents do not return to their households before it is declared safe to do so.