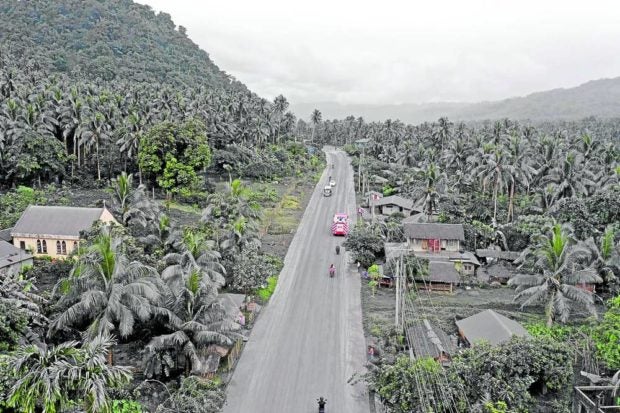 ASHFALL | Mount Bulusan explodes on Sunday morning, after more than eight months of being under alert level 0, sending gray plumes into the sky and raining down ash on several villages in the towns of Juban and Irosin, Sorsogon, and forcing the evacuation of hundreds of families. (Photo from the Sorsogon Provincial Information Service)

LEGAZPI CITY, Albay, Philippines — More than a thousand families in Sorsogon were ordered to evacuate after Mount Bulusan erupted at around 10:30 a.m. on Sunday, with steam-rich gray plumes rising about a kilometer and raining down ash on several villages in Juban town and the adjoining municipality of Irosin.

Some 1,500 families in Juban alone were affected by the ashfall, according to Arvee Lodronio, head of the town’s Disaster Risk Reduction and Management Office (DRRMO).

He said they prioritized persons with respiratory illnesses, senior citizens, and children in Barangay Puting Sapa who were living inside the 5-kilometer radius of the volcano.

“The first explosion seems like rocks rolling at our roof. After a few minutes, the loud sound was followed by heavy ashfall,” said Jonilyn Redota, who said she immediately rushed out of their house in the village of Puting Sapa when she heard four loud thunder-like explosions and looked at Mt. Bulusan, an active volcano towering over their municipality.

The 33-year-old mother said she immediately instructed her four young children to wear face masks and close the windows and doors of their house.

Her mother and two children evacuated to the isolation center of the town while she and two other children stayed in their house to watch over their belongings.

But Redota and the rest of her family would likely have to head for government shelters after Sorsogon authorities ordered a forced evacuation because of Bulusan’s phreatic eruption, which is a steam-driven explosion that occurs when underground water is heated by magma, lava or hot rocks.

Joseph John Perez, DRRMO coordinator of the Department of Education (DepEd) in Sorsogon, said school officials were advised to prepare the classrooms in the towns of Juban, Irosin, Casiguran and Bulusan for possible evacuation of the affected population.

But some residents were reluctant to leave their homes.

Roel Binos, also from Barangay Puting Sapa, said they chose to stay home since they were not sure of their situation in the evacuation center.

“It would be hard for us; we don’t know where to cook and sleep there,” he said.

Raden Dimaano, Sorsogon DRRMO chief, said in a statement that the Bureau of Fire Protection has started clearing operations in the affected areas and emergency operation centers across the province were activated.

Due to possible contamination of water sources by the ashfall, Lodronio said residents in affected areas needed drinking water and other basic necessities.

“Most of the affected families were relying on spring water. Because of the eruption, (ash) contamination is possible,” he said.

Irosin Mayor Alfredo Cielo also issued an advisory that the town’s tourist destinations would be temporarily closed to visitors.

Bernadette Tabing, the DRRMO coordinator of DepEd Juban and a member of nongovernment organizational MJ Haboc Foundation, said they have distributed around 100 packs of relief goods to the residents of Puting Sapa who chose to stay in their houses despite the ashfall.

Science and Technology Undersecretary Renato Solidum, head of the Philippine Institute of Volcanology and Seismology (Phivolcs), said there was a possibility of another eruption because the volcano was slightly inflated.

Based on the ground deformation data, the edifice or cone-shaped structure of the volcano has been inflated since February 2021 while the electronic tilt monitoring recorded a sudden but isolated inflation or swelling of the southwest lower slopes in April 2022, according to a Phivolcs bulletin.

Until Sunday’s eruption, Bulusan had been under alert level 0 (normal) for more than eight months. The last bulletin issued by Phivolcs before Sunday was on Aug. 18, 2021, lowering Bulusan’s status from alert level 1 (low-level unrest) to alert level 0.

Phivolcs reminded local government units and the public that entry into the 4-kilometer radius permanent danger zone must be strictly prohibited and that vigilance in the 2-kilometer extended danger zone on the southeast sector must be exercised due to the increased possibilities of sudden and hazardous phreatic eruptions.

It also urged civil aviation authorities to advise pilots to avoid flying close to the volcano’s summit as ash from any sudden phreatic eruption can be hazardous to aircraft.

Phivolcs likewise enjoined people living within valleys and along river/stream channels especially on the southeast, southwest and northwest sector of the volcano to be vigilant against sediment-laden stream flows and lahars in the event of heavy and prolonged rainfall should phreatic eruption occur.

The Department of Health (DOH) on Sunday also issued a public health warning that the volcanic ash emitted by Bulusan contains carbon dioxide and fluorine that can have a detrimental effect on human health if inhaled.

Affected residents were advised to avoid direct exposure to volcanic ash; stay indoors and close doors and windows; keep the surroundings wet and put damp curtains on windows and doors to prevent dust; avoid inhaling air with ashfall; use glasses or goggles, and prepare an emergency bag (Go Bag) with an adequate supply of water, food, clothing, first aid, and medicines.

Malacañang on Sunday said it was “closely monitoring” the condition of Mt. Bulusan following the phreatic explosion.

In a statement via Viber, Communications Secretary Martin Andanar, who is the acting presidential spokesperson, said all concerned government agencies were on standby 24/7 after alert level 1 has been raised.

Vice President Leni Robredo, who hails from the Bicol region, also said on Sunday that her office had begun mobilizing for rescue and relief operations ahead of the volcano’s unrest.

In a Facebook post, Robredo said they were already prioritizing Juban, Bulusan, and Irosin as well as surrounding areas affected by Bulusan’s restiveness.

She added that her team will be traveling to Sorsogon as soon as possible.