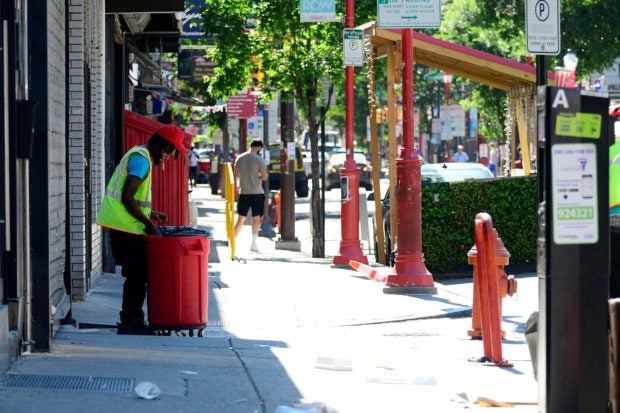 A man from cleaning crew sweeps the street after a deadly mass shooting, on South Street in Philadelphia, Pennsylvania, U.S., June 5, 2022. (REUTERS)

Mass shootings in Pennsylvania and Tennessee killed at least six people and wounded more than 25, police said on Sunday in the latest cases of U.S. gun violence after recent massacres in Texas, New York and Oklahoma.

Multiple shooters opened fire in Philadelphia’s busy South Street, an area filled with bars and restaurants, shortly before midnight on Saturday. Two men and a woman were killed, officials said, with two of the dead and most if not all of the wounded being innocent bystanders.

Surveillance video showed people on a crowded street running in panic in the closing moments of the 22-second clip, presumably after gunshots were fired. The clip had no audio. Reuters was able to verify the video using geolocation.

Likewise in Chattanooga, Tennessee, shooting broke out as people were otherwise enjoying a Saturday night on the town, though the violence erupted after midnight.

No suspects were in custody in either shooting.

In yet another shooting in the early hours of Sunday, three people were killed in Saginaw, Michigan, Mlive.com reported, citing Saginaw police.

In the Chattanooga shooting, three people were dead and 14 suffered gunshot wounds, authorities said, adding that two people died from gunshot wounds and one person died from injuries after being struck by a vehicle while fleeing the scene.

Three victims were injured as they attempted to flee and were struck by vehicles, Tennessee officials said, adding several among the injured remained in critical condition.

The incidents followed recent shootings that killed 10 people at a grocery store in Buffalo, New York; 21 victims at an elementary school in Uvalde, Texas; and four people at a medical building in Tulsa, Oklahoma. Gun safety advocates are pushing the U.S. government to take stronger measures to curb gun violence.

There have been at least 240 mass shootings in the United States so far this year, according to the Gun Violence Archive, a nonprofit research group. It defines a mass shooting as one in which at least four people are shot, excluding the shooter.

In the one deadly outburst, police believe two men got into a physical altercation and began shooting at each other, and one of those two was killed by gunfire. A police officer observed the other shooter firing into the crowd and fired at him.

Police believe that shooter was wounded as he dropped his gun, but he nevertheless escaped through the crowd, Philadelphia Police Commissioner Danielle Outlaw told a news conference

“We’re still using every resource available to get to the bottom of what occurred, not just out there last night, but behind this gun violence in this city, period,” Outlaw said.

Philadelphia Mayor Jim Kenney described the shooting as “horrendous, despicable and senseless.” The deceased were aged 22, 27 and 34 while the ages of the people wounded ranged from 17 to 69.

There were multiple shooters in Tennessee as well. Chattanooga Police Chief Celeste Murphy appealed for the public’s help, asking any witnesses to call a tip line.

Chris Murphy, the lead Democratic U.S. senator working on bipartisan gun safety talks, said on Sunday he thinks a package including investments in mental health and school safety and some changes to gun laws can pass Congress.

A broad majority of American voters, both Republicans and Democrats, favor stronger gun control laws, but Republicans in Congress and some moderate Democrats have blocked such legislation for years.