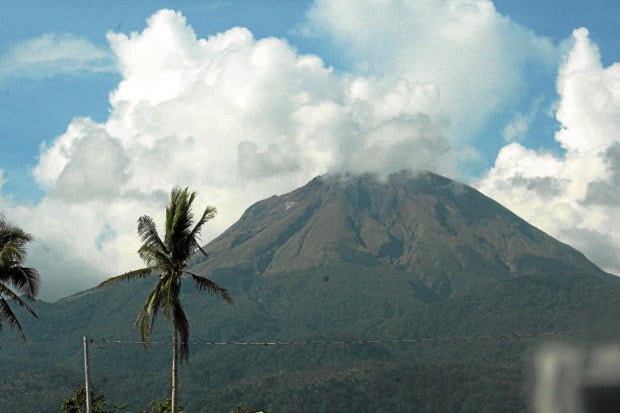 LEGAZPI CITY – Bulusan Volcano in Sorsogon province spewed ash in a phreatic eruption on Sunday morning, according to the Philippine Institute of Volcanology and Seismology (Phivolcs).

“This is to notify the public and concerned authorities of an ongoing phreatic eruption at Bulusan Volcano,” Phivolcs confirmed in a social media post.

“Alert Level 1 status is now raised over Bulusan Volcano, which means that it is currently in an abnormal condition,” Phivolcs said on its website.

This is to notify the public and concerned authorities of an ongoing phreatic eruption at Bulusan Volcano. Details to follow.

The phreatic eruption started at 10:37 a.m. and lasted for about 17 minutes.

“The event was poorly visible through cloud cover over the edifice although a steam-rich grey plume at least 1 kilometer tall was observed from Juban, Sorsogon and was subsequently observed to drift west,” Phivolcs noted.

Some villages in the towns of Juban, Casiguran  and Irosin in Sorsogon were affected by ashfall following the phreatic eruption.

Tabing said some motorists and light vehicles traveling through the two towns’ roads had to stop due to minimal to zero visibility caused by the thick ash.

Joseph John Perez, DRRM coordinator of DepEd – Sorsogon, said in Irosin town, the villages of Bolos, Gulang-Gulang and Monbon were also affected by the ashfall.

Perez said they are preparing the schools in the towns of Juban, Irosin, Casiguran and Bulusan as possible evacuation centers.

Based on ground deformation data from continuous global positioning system (GPS) monitoring, the Bulusan edifice has been inflated since February last year.

Electronic tilt monitoring meanwhile showed a “sudden but isolated inflation of the southeast lower slopes only since April 2022.”

“These parameters indicate that volcanic processes are underway beneath the edifice that are likely caused by shallow hydrothermal activity,” said Phivolcs.“Before the eruption, the Bulusan Volcano Network recorded 77 volcanic earthquakes in the past 24-hour observation period,” Phivolcs said.

Mt. Bulusan is about 70 kilometers southeast of another active volcano, Mayon Volcano, in Albay province.

On August 18, 2021, Phivolcs downgraded the alert level on Bulusan Volcano from Alert Level 1 to Alert Level 0 (Normal) after a general decline in monitoring parameters.