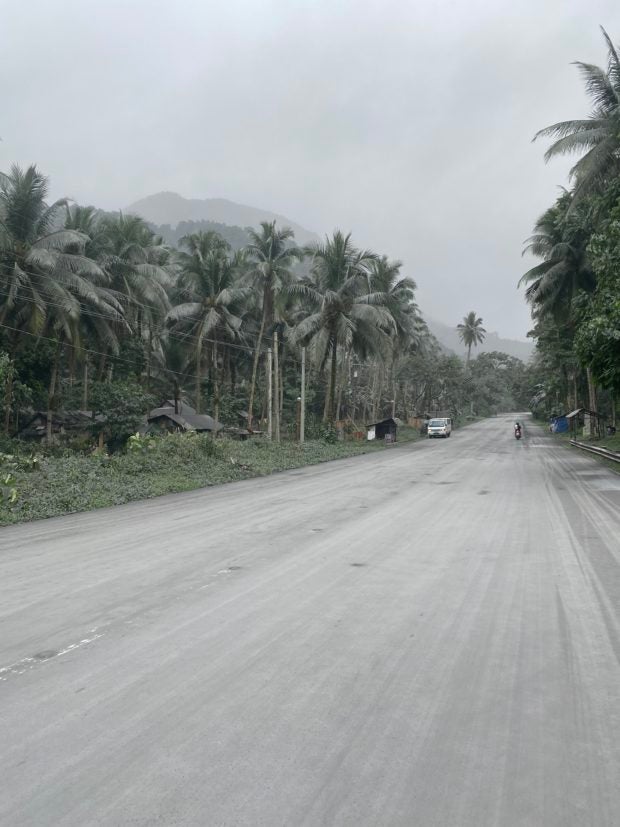 A thick layer of ash caused by the phreatic eruption of Bulusan Volcano blanketed the villages of Bacolod and Buraburan in Juban town in Sorsogon on Sunday. (Photo from Sorsogon Provincial Information Office)

LEGAZPI CITY — Some 50 families, or 180 individuals were evacuated after the local government of Juban, Sorsogon ordered their forced evacuation following the phreatic eruption of Mount Bulusan on Sunday.

Arvee Lodronio, head of Juban’s Disaster Risk Reduction and Management Office, said the evacuees were living inside the 4-6 kilometer radius of the volcano in Barangay Putting Sapa.

The families were moved to the Juban Evacuation Center in Barangay Tughan.

On Sunday night, Sorsogon Governor and Senator-elect Chiz Escudero led the distribution of food packs and other relief items.

Dr. Edric Vargas, who is in charge of the health unit of the local Disaster Risk Reduction and Management Office, said the evacuees also need toiletries, face masks, alcohol, psychosocial first aid, and basic medicines for coughs, hypertension, diabetes, and other health concerns.

The volcano spewed steam-rich gray plumes that rose about a kilometer and dispersed wet ash to the west side at around 10:37 a.m. on Sunday.

In its 8 p.m. bulletin, the Philippine Institute of Volcanology and Seismology (Phivolcs) said that a thin, fine ashfall was observed in the northwestern sector of the villages of Juban and Barangay Bolos in Irosin town.

Rumbling sounds and a sulfurous odor were also observed by residents in the villages of Añog, Guruyan and Catanusan.

Phivolcs chief Renato Solidum said steaming was observed not only in the summit crater but also on the northwestern summit vent.

“After the eruption, degassing was observed from the crater and, for the first time this year, from the northwestern summit vent,” the Phivolcs’ bulletin said.