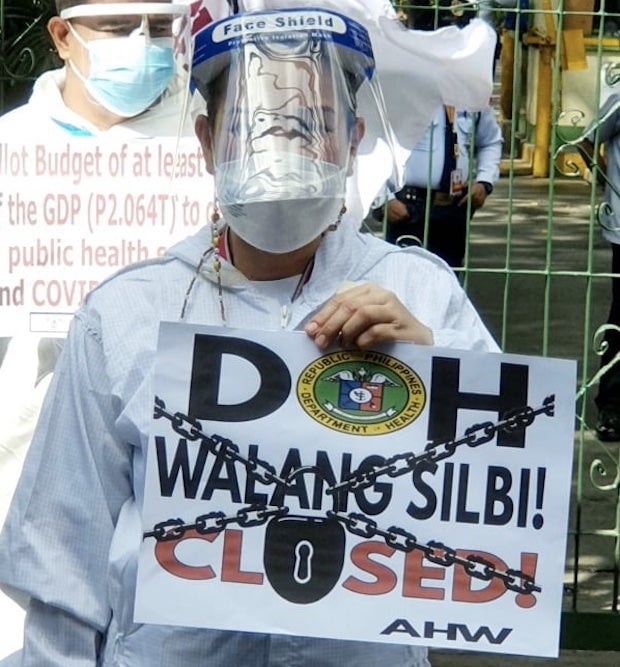 MANILA, Philippines — A group of health workers who have been on the frontlines of the call for better conditions during the COVID-19 surges has asked President-elect Ferdinand “Bongbong” Marcos to select a health secretary that is responsive to their concerns.

Aside from that, the Alliance of Health Workers (AHW) said in a statement on Wednesday that they prefer that the next Department of Health (DOH) chief have a good track record in good governance to ensure that the interests of patients and health workers would be prioritized.

“We prefer a health chief who has an excellent track record on good governance, accountability, and integrity, and one who will wholeheartedly serve the people,” he added.

Mendoza in particular said the next DOH secretary should have no attachments to the Pharmally issue. Pharmally has been a subject of a congressional probe following findings of the Commission on Audit (COA) on the pandemic spending of the DOH.

“We strongly reject a DOH chief who has records of being involved in anomalous transactions like the Pharmally deal and one who has a record of gross negligence in the disposition of medicines and medical supplies as many of these were only stored in DOH warehouses and eventually expired and wasted amidst many patients are deprived of accessing free medicines, supplies, and medical health services,” Mendoza said.

“Moreover, health workers are deeply disappointed knowing about the injustice done in tackling the Pharmally anomaly. We will never forget that during the earliest surge of the pandemic, many have died including our fellow health workers, due to negligence and incompetence of the DOH and Duterte administration,” he added.

The COA in a report marked DOH’s deficiencies in its P67.32 billion COVID-19 funds for 2020. Specifically, the COA said the DOH has a deficiency of P42 billion, including funds that the agency transferred to the Procurement Service of the Department of Budget and Management (PS-DBM) for pandemic supplies.

One of the companies that were tapped by PS-DBM to provide COVID-19 supplies to the government was Pharmally Pharmaceutical Corp. with contracts amounting to P8.7 billion – despite the company having a small paid-up capital of P625,000.

There were also claims from senators that the prices of personal protective equipment like masks and face shields that Pharmally supplied were overpriced with face masks costing around P28 apiece when local manufacturers were selling them at P13 each.

Involved government officials and personnel justified the deal with Pharmally, asserting that the cost of emergency procurement was high because of supply shortage at the start of the pandemic.

The AHW, at the same time, called on Marcos to appoint a DOH secretary who will protect health workers’ exercise of their free speech. They complained of being subjected to red-tagging which AHW members experienced even during the pandemic.

“We need a health secretary who can guarantee and will respect our constitutional right to self-organization, collective negotiations, peaceful concerted activities, security of tenure, and to petition the government for a redress of grievances,” AHW secretary-general Benjamin Santos said.

“We aspire to have a DOH Secretary who is determined to protect and defend the health workers against discrimination, intimidation, and violence including cases of red-tagging and killings. Violating our human rights is unjust as we are simply asking for better benefits, salary increase, and humane working conditions,” he added.

AHW has been at the forefront of calls for better conditions for health workers, especially after several doctors, nurses, and other hospital staff either got sick due to COVID-19 or died from the disease.

The group claimed several times that the government, instead of listening to them, had only labeled them as supporters or members of communist rebel groups.