Car drives into a crowd in Berlin, at least one dead | Inquirer News
Close
menu
search

Car drives into a crowd in Berlin, at least one dead 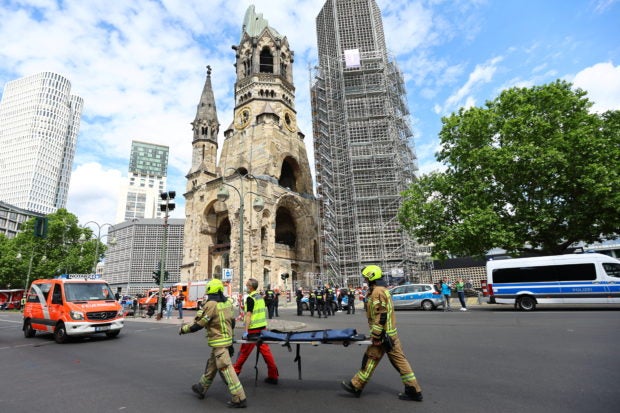 Emergency crews work at the site after a car crashed into a group of people, injuring dozens and killing at least one, at Tauentzien Strasse near Kaiser Wilhelm Gedaedtniskirche church in Berlin, Germany June 8, 2022. REUTERS

BERLIN — A car drove into a crowd of people in western Berlin on Wednesday, killing at least one person, a spokesperson for the German capital’s police said.

Around 30 people were injured, a spokesperson for the fire service added.

“A man is believed to have driven into a group of people. It is not yet known whether it was an accident or a deliberate act,” police said, adding that he was being held at the scene.

Mass-selling daily Bild said the man had been driving a small Renault car.

Reuters TV showed a large deployment of fire service and ambulances at the scene, with rescue workers carrying empty stretchers, next to the war-ravaged Gedaechtniskirche church, one of Berlin’s best-known landmarks.

The incident took place near the scene of a fatal attack on Dec. 19, 2016, when Anis Amri, a failed Tunisian asylum seeker with Islamist links, hijacked a truck, killed the driver and then plowed it into a crowded western Berlin Christmas market, killing 11 more people and injuring dozens of others.

Using vehicles as weapons of terror in Europe and America

Man drives into crowd in Germany, at least 2 dead

US man allegedly planned to drive van into crowd