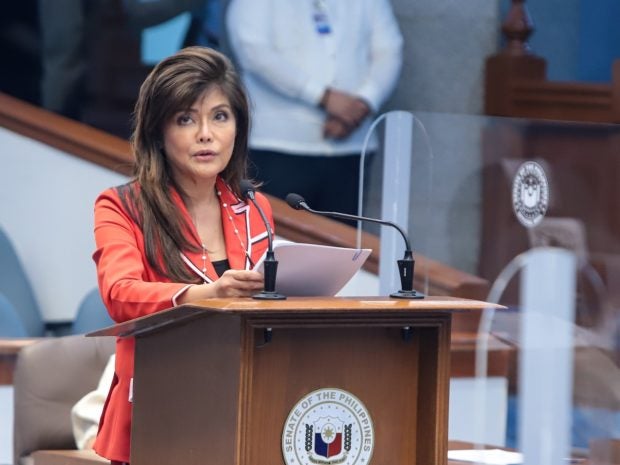 In an ANC interview, Marcos said her connection with her younger brother is “always direct and always very strong.”

“For example, during the campaign…I think that while I was not part of the campaign headquarters, in fact, I had the biggest part,” the senator said.

She recounted having said in an interview last year that a tandem between her brother and Duterte-Carpio would be a “marriage made in heaven.”

“What I said was a marriage in political heaven. And pursigido ako dun. In the beginning, we thought Bongbong could be the vice president of Sara Duterte who is running for president, she opted out clearly and out of the blue, I simply told her ‘Look, Solid North and Solid South is the ideal solution, why don’t you run for vice president?’ Marcos said.

While Duterte-Carpio was hesitant to run for the presidency, Marcos said the Davao City mayor thought vying for the vice presidency was “not so bad.”

“Napatigil siya, texted me back and said ‘Hey, that’s not so bad.’ And I said ‘Well, you better think about it because many are called, few are chosen, you’re clearly the most popular and you clearly need to play a role. You can’t abandon all of us.’ So that’s what happened,” Marcos recalled telling Duterte-Carpio.

“In the beginning, Bongbong did not know Sara very well at all but I had campaigned with her in 2018 to 2019 for the Senate and she was a real revelation,” the senator also said.

Marcos Jr. and Duterte-Carpio clinched the top two posts in the country with a landslide win in the May 9 polls, which saw the highest voter turnout since the country adopted an automated election system in 2010.

Both of them garnered over 30 million votes based on the official count done by Congress.