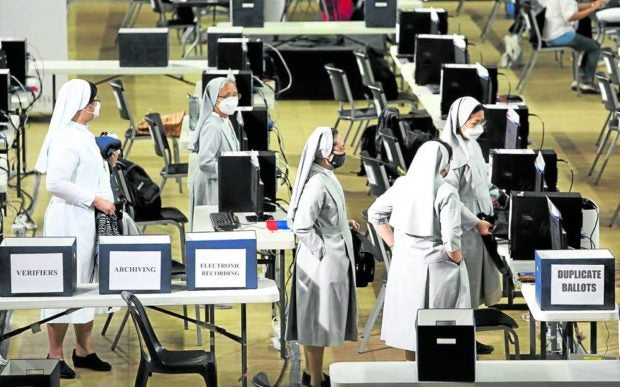 SISTERS’ ACT Volunteers, including nuns, turn up at the command center of Parish Pastoral Council for Responsible Voting inside the University of Santo Tomas campus in Manila on the
first day of manual audit of election returns. —MARIANNE BERMUDEZ

MANILA, Philippines — The just-concluded elections may prove to be the fastest in transmitting election returns and the highest voter turnout since the country adopted the automated election system in 2010, the Commission on Elections (Comelec) said on Tuesday.

The poll body said the media and transparency servers have already received 98.76 percent of the election results just a day after the polls.

“This is a breakthrough compared to other elections,” Comelec Commissioner Marlon Casquejo said in a press briefing.

He said the fast transmission can be attributed to the preparations made by the poll body, including the “enhanced terms of reference” to prevent another seven-hour glitch which marred the 2019 midterm polls.

The Philippines may also see its highest voter turnout yet, with 80.38 percent already as of Monday night.

The highest recorded voter turnout was during the 2016 national elections with 81 percent, but the Comelec was expecting much more than that for the 2022 polls, Casquejo said.

“Back in 2016, we had no restrictions. Now we are in a pandemic and still the Filipino people got out of their homes and voted,” Laudiangco said.

Casquejo attributed the high turnout to higher voter interest. People “really wanted their votes to be counted,” he said.

Laudiangco also said that this election also drew a record-breaking voter turnout of 88 percent from the 84,357 local absentee voters.

Casquejo said the current partial and unofficial vote count based on transmitted results would be the same as the final canvass.

But a social media post raised suspicions on a supposed statistically improbable margin of votes between former Sen. Ferdinand Marcos and Vice President Robredo that was a “consistent 47 percent” during the first three hours of election returns transmission, from 8 p.m. to 11 p.m. on Monday.

“That’s hard to prove, that so-called cheating with regard to percentage,” Casquejo said in response.

“Our system has undergone certification and we had a local source code review. How can we insert such a percentage to make one candidate win or make one candidate lose? If they insist, they can check the ERs (election returns) in each province,” he said.

Robredo, who has not yet conceded to Marcos, said her camp had already reached out to experts to discuss various reports regarding the supposed irregularities observed during the Monday’s polls.

“I’m aware of the questions that remain hanging in this situation,” Robredo said in a Twitter post on Tuesday.

“We have started talking with experts to closely study the reports and allegations that we read on social media. We will immediately share the results of the study,” she said.

Other allegations of fraud had been posted by the Vice President’s supporters on social media platforms, including videos of alleged vote-buying by the Marcos campaign.

Romulo Macalintal, head of Robredo’s legal team, declined to comment on possible legal actions ahead of the the official canvass of votes on May 23 by Congress.

The opposition coalition 1Sambayan has called for volunteers in manually validating some 10,000 election returns with the use of a mobile app developed by a private technology company.

The volunteers were asked to go to the group’s monitoring area at Mondragon Center in Salcedo Village, Makati City.

“We have already received responses from many volunteers. They will be working in shifts,” 1Sambayan communications head Alvi Siongco told the Inquirer.

This represents 98.09 percent of the nationwide election returns.

Sen. Panfilo Lacson also conceded to Marcos Jr. after getting only 880,744 votes.

Willie Ong got 1,8442,467 votes. The others who got fewer votes were Lito Atienza, Manny SD Lopez, Walden Bello, Carlos Serapio and Rizalito David.