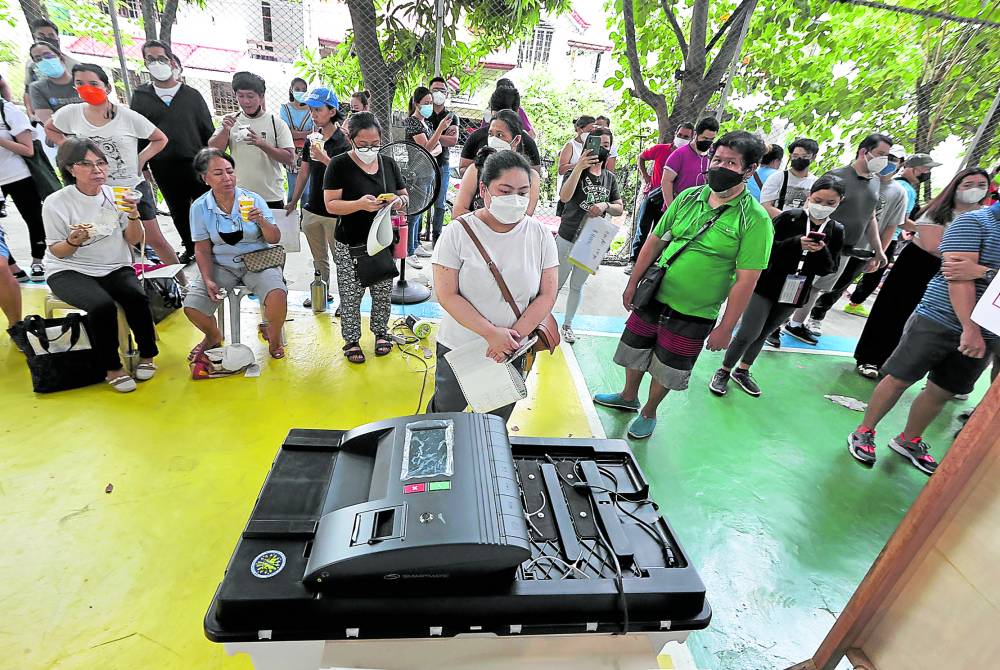 WHERE’S THE REPLACEMENT? Voters are forced to wait in line after the vote-counting machine (VCM) at their assigned precinct malfunctioned in North Susana Executive Village, Quezon City, on Monday. —GRIG C. MONTEGRANDE

MANILA, Philippines—The morning after the elections, the Commission on Elections (Comelec) announced that this year had the fastest-ever transmission of election returns since the country adopted automated voting.

“It’s because of the improved and upgraded equipment and system,” said Comelec Commissioner George Garcia.

However, the statement was made while many voters who camped out inside voting centers were still waiting for functioning vote-counting machines (VCMs) so they can finally feed their ballots and make their votes count.

As early as 8:15 a.m., a little over two hours since voting precincts opened on May 9, the poll body has already replaced 10 VCMs.

Hours after voting precincts closed, election watchdog Kontra Daya and VoteReportPH—an alliance of ICT professionals and organizations—continued to receive reports of malfunctioning VCMs across the country.

On May 8, VoteReportPH started receiving reports of election anomalies through text messages, e-mails, social media posts, and its website.

Based on the group’s data as of May 10, the organization has received multiple reports with subcategories or tags such as VCM errors, PCOS (Precinct Count Optical Scanner) errors, disenfranchisement, BEI (Board of Election Inspectors) procedures, rejected ballots, VCM problems, and “others”—which include reports related to defective equipment, election returns, and delayed voting.

Figures showed that out of the 219 reports under those subcategories, majority—or 80.82 percent—of the cases involved errors with VCMs, including rejected ballots, with 177 reports. 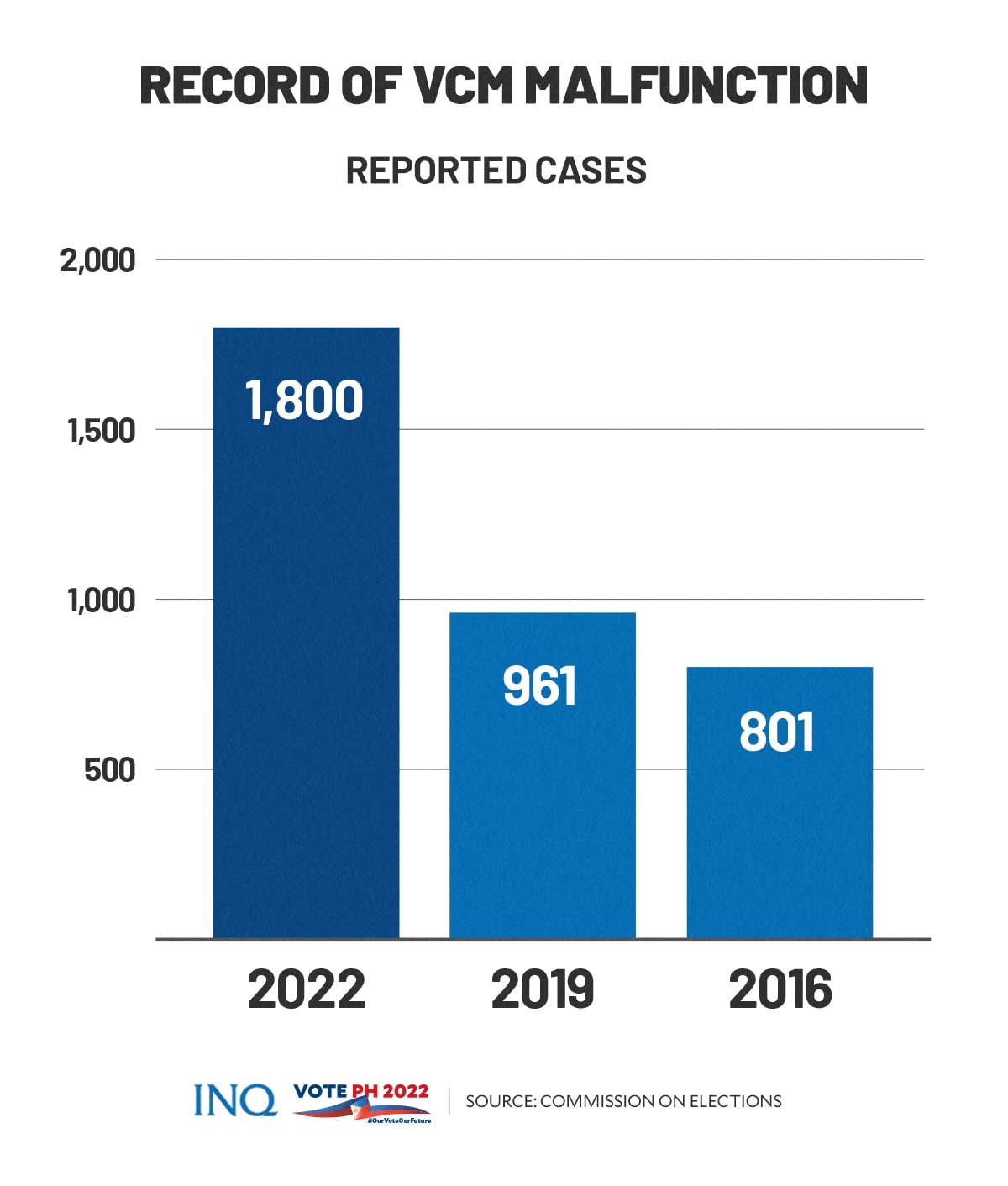 Reports of disenfranchisement—the act of depriving a person of the right or privilege to vote—accounted for 11 reports or 5 percent of the total reports sent to VoteReportPH.

There were 15 reports on complaints about the BEI procedures. According to the poll body’s contingency procedures in cases where VCMs malfunction, voters will be given an option to shade their ballots, leave their ballots to BEIs and sign a waiver allowing BEIs to feed their ballots once functional VCMs arrive.

But many voters refused to leave their ballots behind and decided to wait for functioning VCMs to arrive.

Kontra Daya’s “end-of-day” report as of 7 p.m. on May 9 showed that there were 321 verified cases of VCM errors, which included paper jams and rejection of ballots. The figures accounted for 35 percent of the total verified reports in various regions in the country.

In an earlier report, Kontra Daya said the cases of faulty VCMs doubled from 801 reports recorded during the 2016 national and local elections and 961 in the 2019 midterm elections to at least 1,801 reports this year based on Comelec data.

At a press briefing on May 10, Comelec Commissioner Marlon Casquejo said there were 915 defective VCMs replaced and 469 SD cards regenerated during the elections. 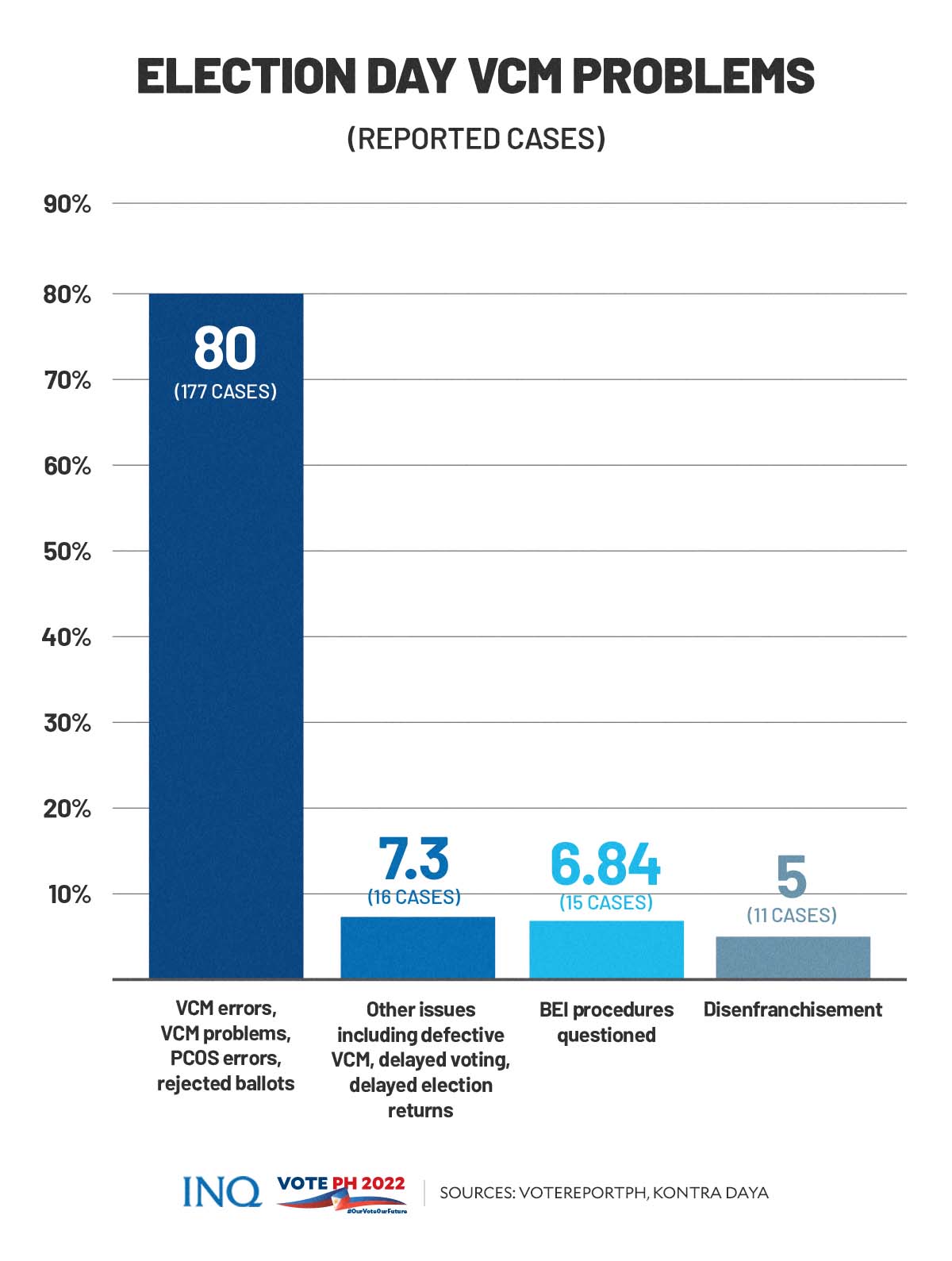 When asked about the impact of those faulty VCMs, he said the figures were small.

According to Comelec and Vote Pilipinas, there are a total of 65.7 million registered voters in the country. 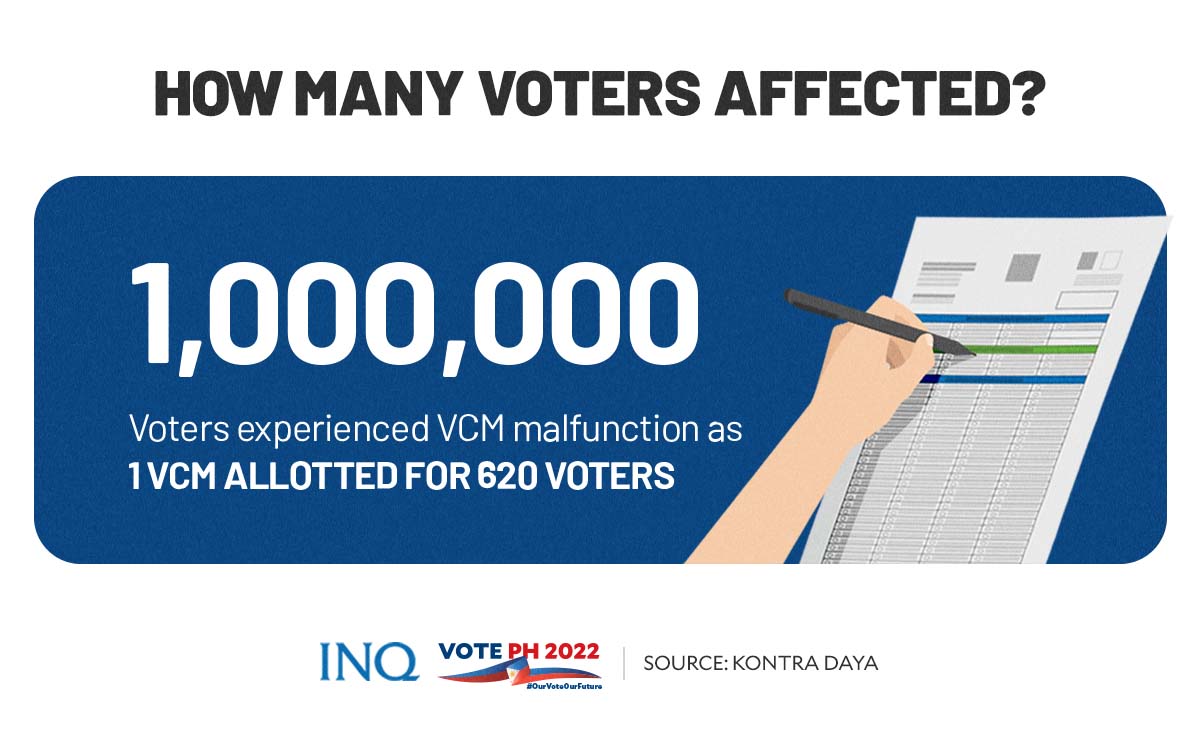 Kontra Daya’s calculations, however, showed that over one million voters were affected by malfunctioning VCMs or one VCM for every 620 voters.

According to reports submitted to VoteReportPH, the areas where malfunctioned VCMs hindered the voting process for some voters include:

Several reports during the past 24 hours stated that many voting precincts in Quezon City encountered faulty VCMs, causing voters to camp inside school grounds or voting centers just to personally feed their ballots into functioning VCMs. 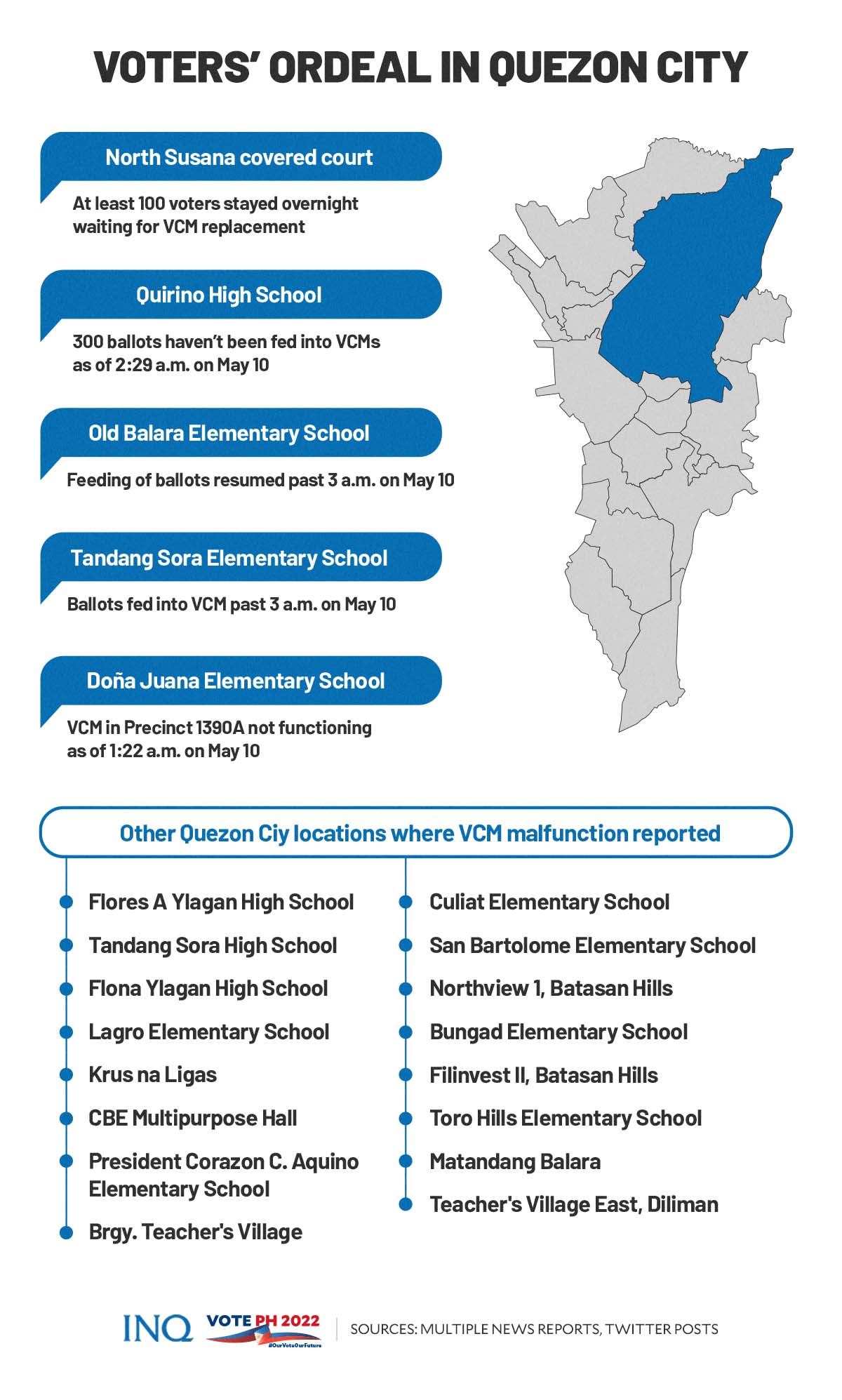 At the North Susana covered court, it was reported that at least 100 voters stayed overnight waiting for a VCM replacement.

Other polling centers with reported VCM malfunction, according to several social media posts and reports, include:

Kontra Daya has called on the Comelec to extend voting hours beyond 7 PM following cases and reports of VCM breakdowns and long lines inside voting centers.

“With the volume of reports coming in to Kontra Daya regarding vote counting machine (VCM) breakdowns, as well as the longer time required to vote due to enforcement of health protocols, there is a high probability that many voters would be unable to vote by 7 p.m.,” the watchdog said. 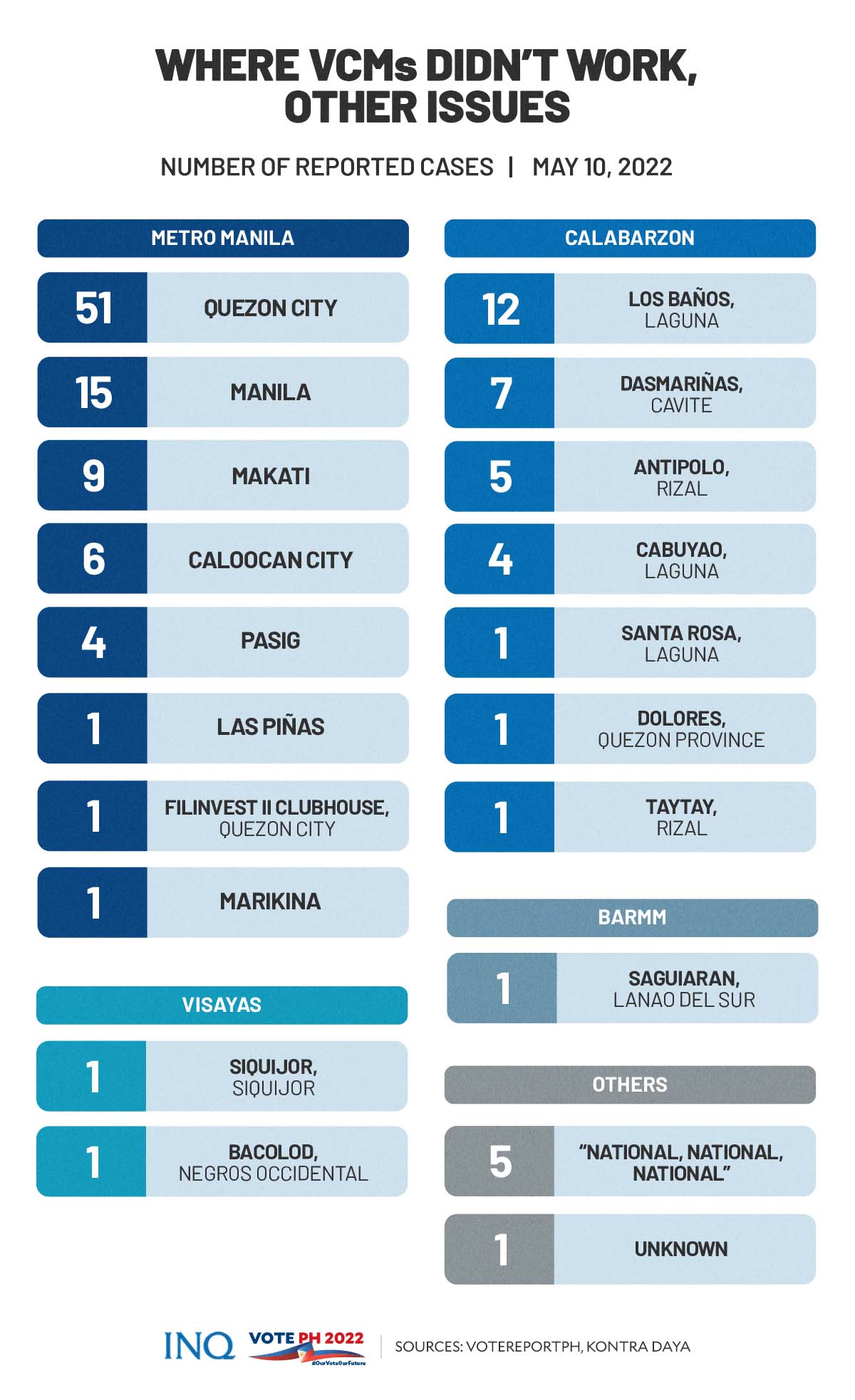 Extending voting hours, according to Kontra Daya, will allow more voters to cast their votes and give more time for Comelec to resolve election-related issues. 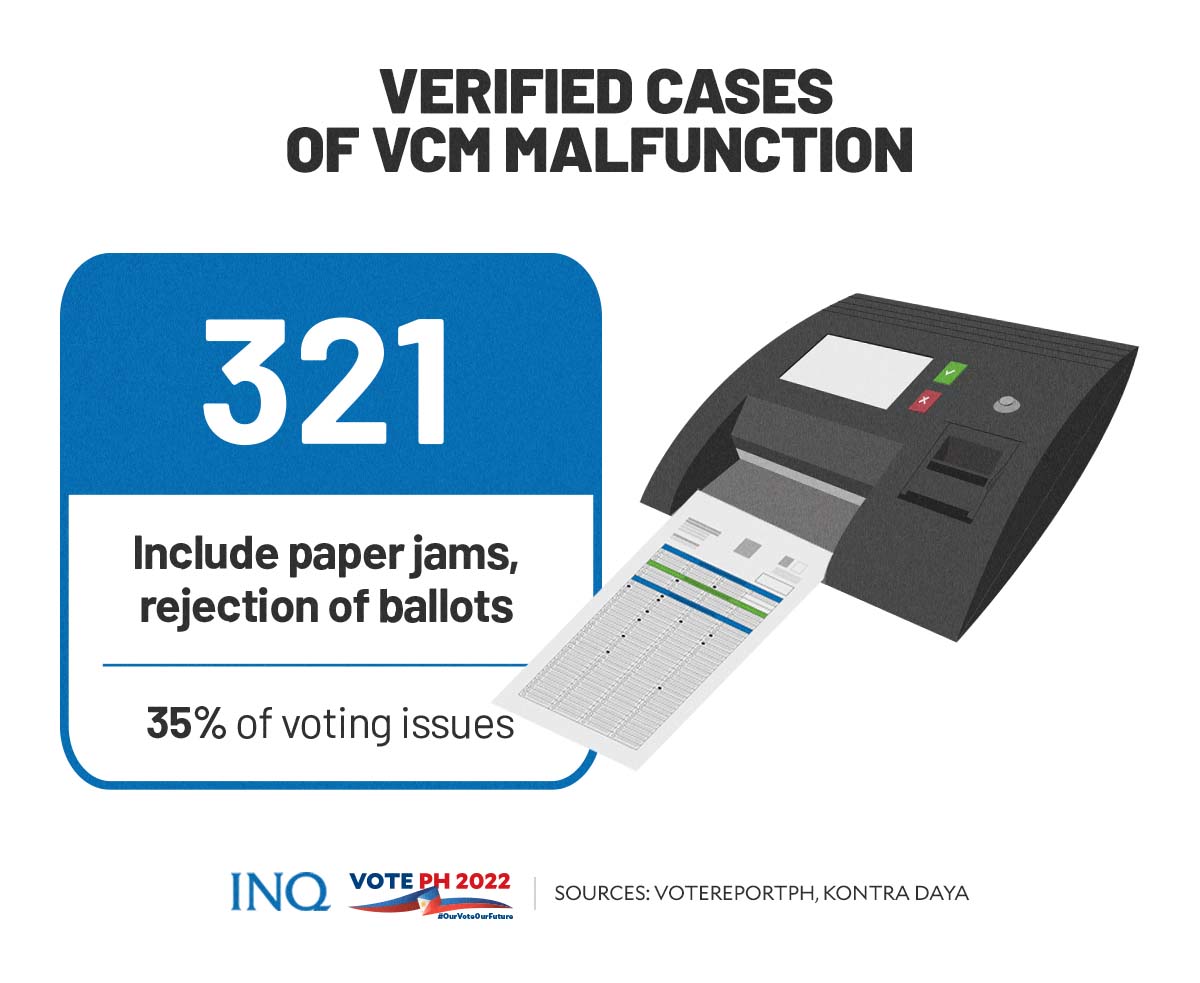 At a press briefing on May 9, Comelec chairman Saidamen Pangarungan said voters inside or within the vicinity of voting centers, who have yet to cast their votes when voting closes at 7 p.m., will still be accommodated.

“We can extend the voting hours up to the time that we have accommodated everyone within the vicinity of voting centers,” he said.

The election watchdog also pointed out some inconsistencies with reserved VCMs which were supposedly on standby and will be deployed to areas where VCMs malfunctioned.

“Despite earlier pronouncements that there are supposedly 2,000 VCMs on standby, there were reports that defective machines had been not replaced,” said Kontra Daya.

Kontra Daya noted that there were fewer machines this year on standby compared to the previous elections—2,000 machines in 2022 compared to 7,000 in 2019.

READ: Comelec explains use of fewer counting machines for 2019 polls

Casquejo assured that the poll body will release a list of areas that encountered VCM malfunctions to the public.

Kontra Daya, in its report, said that the Comelec, Smartmatic, and F3 Logistics should be held liable for the election blunders, including the “massive breakdown” of vote counting machines and voter disenfranchisement.

“These machine breakdowns have contributed to the voters’ disenfranchisement as they experienced long queues outside poll precincts.”

The group recalled that last year, the poll body awarded a service contract worth P637M to Smartmatic to refurbish the VCMs for the 2022 elections.

Under the contract, Smartmatic will refurbish 97,145 units of VCMs. As of November 25 last year, Comelec said 96,981 VCMs—or 99.6 percent—of the total VCMs under the contract have already been refurbished. 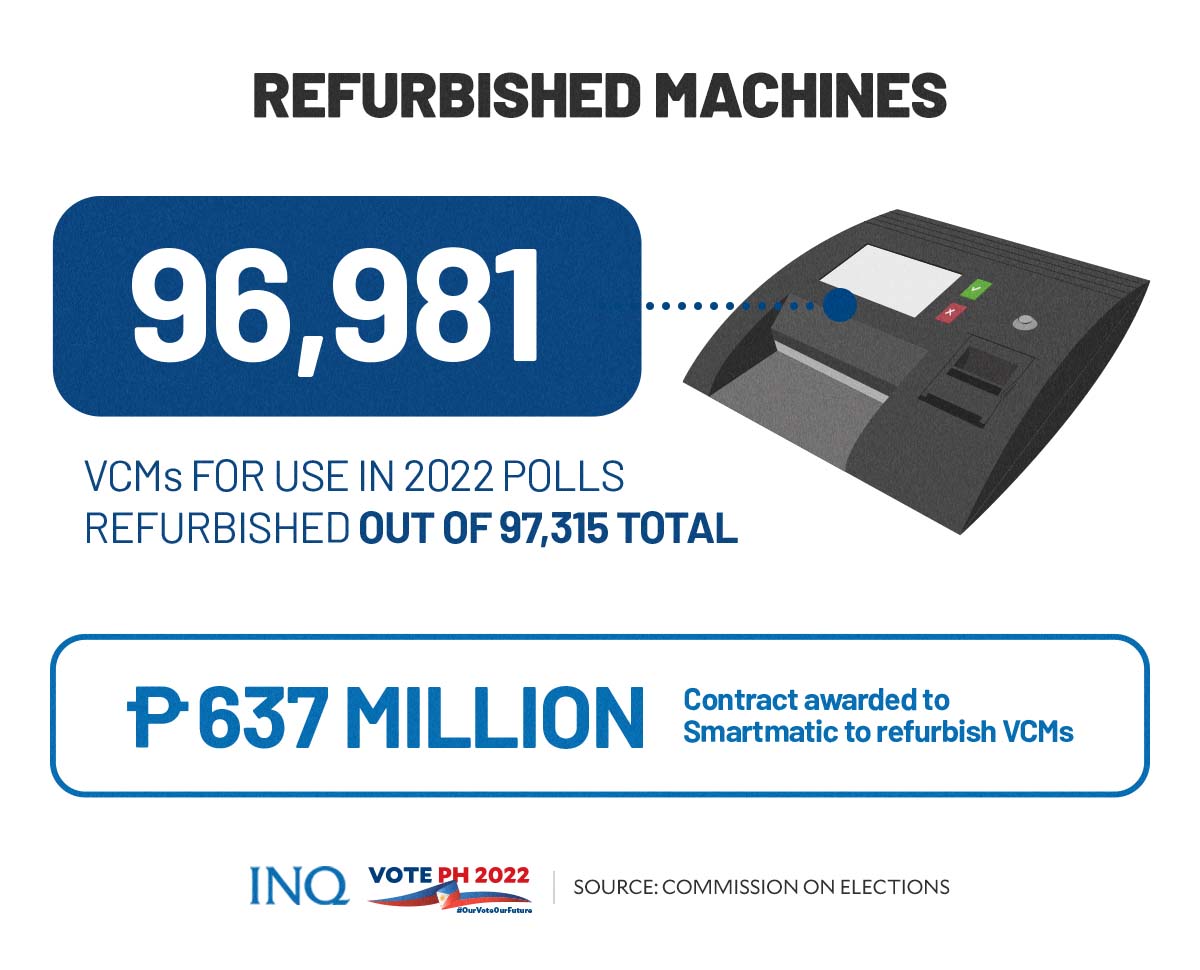 However, following reports of faulty VCMs, Comelec said it will discard the machines in future elections.

“I think this is the last dance for our VCMs. We will not use them anymore in the 2025 (midterm) elections,” said Casquejo.

“Even if they say the budget for the 2025 elections is small, we will insist that we would not use these VCMs for the succeeding elections. The VCMs have reached their limit, (their) life span,” he added.

Garcia, in an interview over ABS-CBN’s TV Patrol on the evening of elections, said that the VCMs used for this year’s polls have already been used for years, explaining the malfunctions.

“Maybe this is the time to think about spending on purchasing new machines,” he said.

Amid the complaints about election-related issues, specifically the faulty VCMs, Garcia said the May 9 elections was successful.

“Even during the past elections, we encountered similar issues. But if you compare this year’s election to the ones held in 2013, 2016, and 2019, this election this year is different, there is a pandemic. Despite that, the elections was systematic,” he said in an interview. 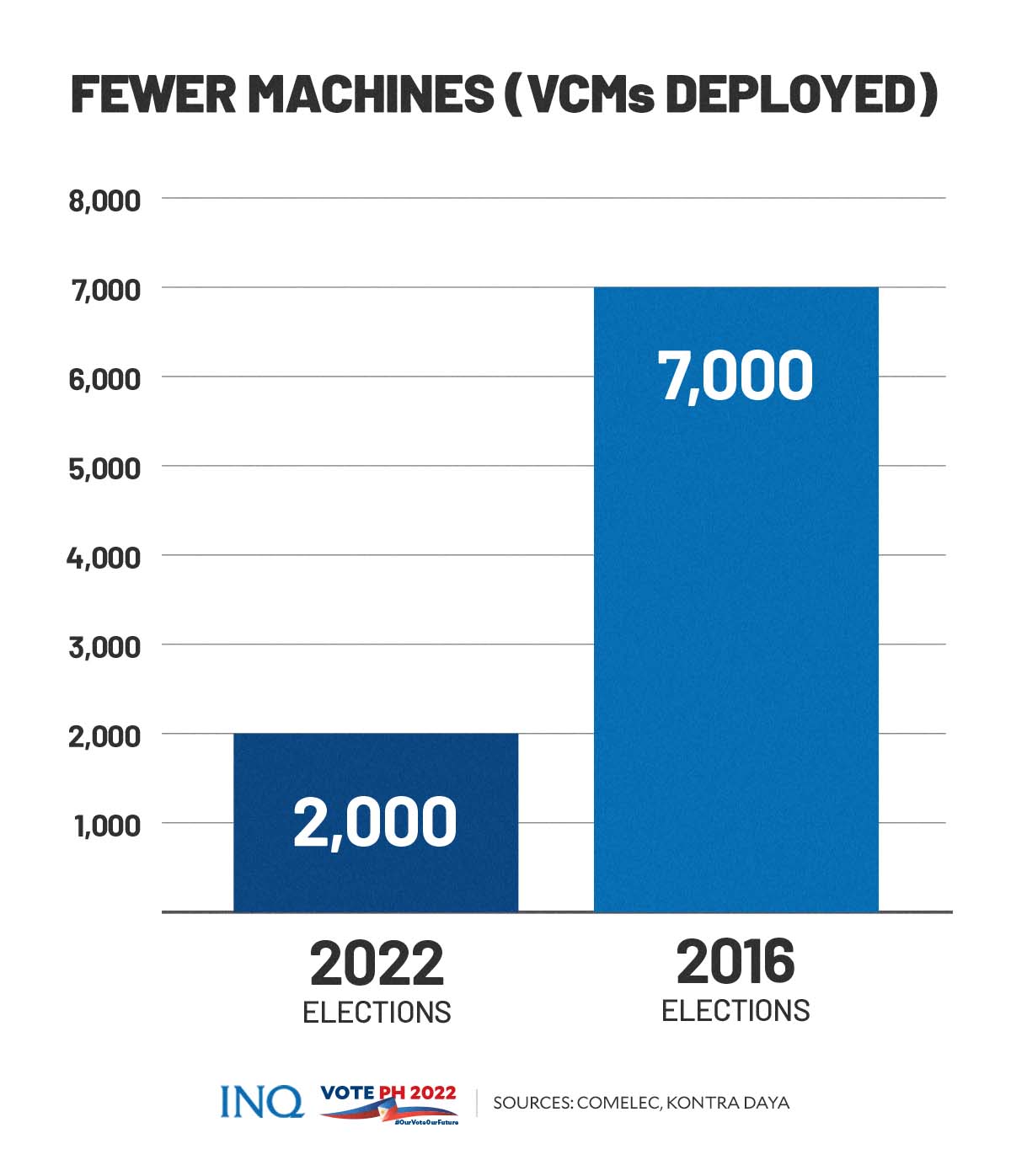 “There might be few issues, some (cases of election-related) violence, some malfunctioned machines, but the elections was generally systematic.”

In a separate television interview, Garcia apologized to voters inconvenienced by faulty VCMs.