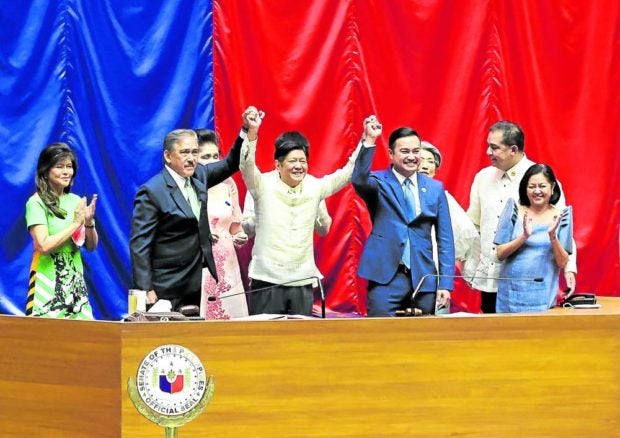 MANILA, Philippines — Ferdinand Marcos Jr. was proclaimed as the country’s 17th president on Wednesday, 36 years and three months since his family hastily evacuated Malacañang Palace after the fall of his father’s dictatorship, bringing both the hope of unity to the nation and the fears of a return to strongman rule.

Marcos, 64, and Duterte, 43, won the May 9 elections, in a stunning landslide victory, with more than double the number of votes received by their closest rivals.

The official canvassing by Congress, acting as the National Board of Canvassers (NBOC), was completed after just a little over 15 hours with 98.84 percent, or 171 out of 173 certificates of canvass (COCs), containing a total of 53,815,484 votes.

First called to the podium of the plenary hall of the House Representatives to be proclaimed winner was Duterte, who was without a family member to accompany her as she received the certificate of her victory at the polls from Senate President Vicente Sotto III, one of her opponents in the vice presidential race, and Speaker Lord Allan Velasco.

She shook hands and bumped fists with lawmakers who congratulated her on her way back to her seat beside Marcos.

Minutes later, Marcos was called. He was accompanied to the rostrum by his wife Liza, son Simon, and sisters Irene and Sen. Imee Marcos. His frail 92-year-old mother, former first lady Imelda Marcos, was assisted up the stage by his cousin, House Majority Leader Martin Romualdez.

Some in the audience chanted “BBM! BBM,” the shortcut for his nickname, Bongbong Marcos, which became popular during the campaign.

In a statement, Malacañang assured Marcos of a smooth and peaceful transition of power.

Acting presidential spokesperson Martin Andanar said the proclamation of Marcos and Duterte marked “another historic milestone in our political life as a nation underscoring that we are, indeed, a showcase and beacon of democracy in this part of the world.”

“As both leaders are about to embark on the responsibilities and challenges of their respective offices, we reiterate our call for our people to stand behind our newly elected leaders,” Andanar said.

There was no personal congratulatory statement from President Rodrigo Duterte himself.

“What we have witnessed in the last local and national elections, for me, was one of the most credible, orderly, and peaceful elections in our nation’s history,” said Senate Majority Leader Juan Miguel Zubiri, who headed the senatorial panel in the NBOC.

He pointed out that the country saw the highest number of votes cast in its election history with an 82 percent voter turnout. 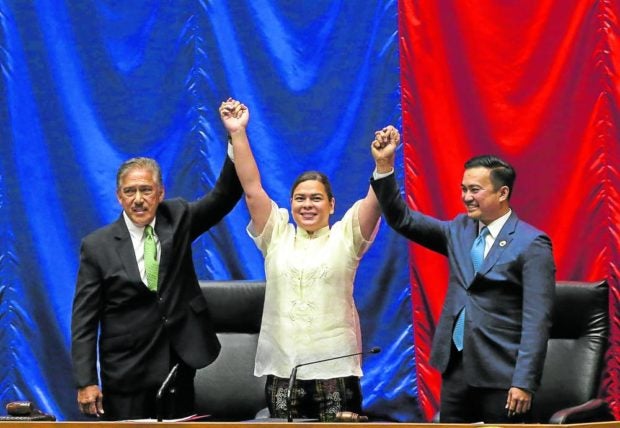 THE DAUGHTER ALSO RISES
The victory of Vice President-elect Sara Zimmerman Duterte-Carpio (left photo), daughter of the outgoing president, marks the first time since 2004 that the two highest elected officials of the republic are from the same team. —LYN RILLON

It was the first time that Filipinos elected a majority president and vice president under the 1987 Constitution, he said.

“In this election President-elect Bongbong Marcos and Vice President-elect Sara Duterte were truly rock stars,” he said. “However the greater task of the victors today is to unite our countrymen for nation-building. That begins today. This weighs heavily on their shoulders.”

This is also the first time in Philippine history that the children of former presidents of the country will lead the nation as its President and Vice President.

And it is the first time in 18 years that a presidential aspirant and his candidate for vice president were elected since Gloria Macapagal-Arroyo and Noli de Castro won the national elections in May 2004.

Several petitions had been filed to block Marcos’ candidacy over his conviction for nonpayment and nonfiling of income tax, but these were all dismissed by the Commission on Elections (Comelec). The petitioners are appealing the Comelec’s decision in the Supreme Court.

Sotto, who placed third in the vice presidential race, congratulated both Marcos and Duterte.

“You have been placed by God in this position for a reason,” he said in a speech at the proclamation ceremony. “May He lead you into your purpose and make you live it courageously. In every step you take, may God protect you.”

In a longer congratulatory speech, Velasco said that “Congress bears witness to the unity of our country: a true partnership between the north and the south, that has become the unity of all corners of the country.”

“The people have spoken decisively. This is not just your sweeping electoral victory for all Filipinos. This is a victory of our democracy,” he said.

Questions about the search for more of the Marcos family’s ill-gotten wealth and the alleged human rights violations and numerous extrajudicial killings under the outgoing Duterte administration, among other issues, will haunt the country’s top leaders.

Activists and survivors of the martial law regime of Marcos’ father said they would closely watch his actions and promised to continue defending democratic rights and won’t allow them to be violated again. “We will not be muzzled,” vowed playwright Bonifacio Ilagan, who suffered severe torture during the dictatorship.

Renato Reyes, secretary-general of Bayan, said the proclamation “completes” the restoration of the Marcoses and the extension of the Dutertes in power.

There also could be attempts to invalidate the record of the dictatorship, but Ilagan said that it “would be messy” and would have to overturn a law enacted, that recognized and compensated more than 11,000 confirmed victims of martial law.

“We hope and will be gladly surprised if they prove us wrong,” said Edre Olalia, president of the human rights lawyers’ group National Union of Peoples’ Lawyers.

Prior to his presidential bid, Marcos served as a senator from 2010 to 2016 before he ran for vice president in May 2016 where he was defeated by Robredo with a narrow margin. His election protest was thrown out by the Supreme Court.

He first entered the political arena in 1980 at the age of 23 as vice governor of Ilocos Norte and later served as its governor until his father was ousted in the 1986 Edsa People Power Revolution.

They fled to Hawaii where his father died three years later.

The Marcoses were allowed to return to the country in 1992 and Marcos was elected congressman representing Ilocos Norte’s second district.

He also served as governor of the province for three consecutive terms, from 1998 up to 2007, when he was elected congressman anew and then won a seat in the Senate in 2010.

Duterte followed in her father’s footsteps and became a lawyer and served as vice mayor and later mayor of Davao City.

Her father has openly expressed his dislike for Marcos, calling him a spoiled child and a “weak leader” who carried “baggage.”

President Duterte was deeply disappointed when his daughter decided to run as vice president as surveys last year showed she was ahead of Marcos.

The speedy canvass was not without hitches.

On the eve of the proclamation, the NBOC was forced to tally election results from the provinces of Pampanga, Sultan Kudarat, and Surigao del Sur from photos submitted on the Viber messaging app because the documents were missing from the ballot boxes.

In all three cases, it turned out that the provincial election supervisors of the three provinces had failed to insert the COCs into ballot boxes before they were transported to Congress for the canvassing.

The vote totals from the three provinces amounted to a little over 2 million, not enough to change the outcome of the national elections, but disturbing enough that some lawmakers expressed concern that it could have disenfranchised a good number of voters.

Casquejo said the investigation would determine whether the lapses were “intentional or inadvertent” and the sanctions to be imposed on poll workers found to be accountable.

Marcos to keep ‘unity promise’ during his presidency, says spokesman