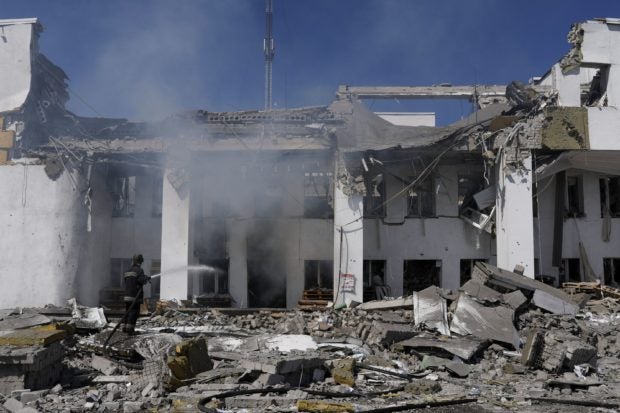 A firefighter works to extinguish a fire after a Russian bombing hit the House of Culture, which was used to distribute aid, amid Russia’s attack on Ukraine, in Derhachi near Kharkiv, Ukraine, May 13, 2022. REUTERS/Ricardo Moraes

KYIV — A Ukrainian court sentenced two captured Russian soldiers to 11 and a half years in jail on Tuesday for shelling a town in eastern Ukraine, the second war crimes verdict since the start of Russia’s invasion in February.

Alexander Bobikin and Alexander Ivanov, who listened to the verdict standing in a reinforced glass box at the Kotelevska district court in central Ukraine, both pleaded guilty last week.

“The guilt of Bobikin and Ivanov has been proven in full,” Judge Evhen Bolybok said, standing in front of a Ukrainian flag.

Prosecutors had asked for 12 years, but defense lawyers said the sentence should be eight years, taking into account that the soldiers had pleaded guilty and expressed remorse and had been following orders.

After the verdict, the two were asked if they felt the sentence was fair and both said yes. Guards armed with Kalashnikov rifles handcuffed the two and led them out of the courtroom.

Both acknowledged last week being part of an artillery unit that fired at targets in the Kharkiv region with Grad missiles from Russia’s Belgorod region.

Prosecutors said the shelling had destroyed critical infrastructure and houses in several settlements across the border and an educational facility in the town of Derhachi, but caused no casualties.

Bobikin and Ivanov, described as an artillery driver and a gunner, were captured after crossing the border and continuing the shelling.

On May 23, a Ukrainian court sentenced a Russian soldier to life in prison for killing an unarmed civilian.

Kyiv has accused Russia of atrocities and brutality against civilians during the invasion and said it has identified more than 10,000 possible war crimes.

Russia has denied targeting civilians or involvement in war crimes while it carries out what it calls a “special military operation” in Ukraine.

Read Next
CHR backs DepEd’s call to resume 100% in-person classes
EDITORS' PICK
Bongbong Marcos says PH ‘open for business’ with new Clark Airport terminal
Individuals affected by ‘Karding’ now over 157,000
Newbie gamers are in for a treat with the power-packed feature of vivo Y16
Karding damage to infrastructure at P23M
House energy committee chair Arroyo bats for cheap electricity
Reignite your passion with the vivo Y35
MOST READ
Angelica Panganiban ‘duguan, sugatang mom’ one week into breastfeeding
LPA enters PAR, may develop into tropical depression
Badoy not with Office of the President, NTF-Elcac, under Marcos admin — solon
Charges readied vs gov’t guard with P290-M deposits
Don't miss out on the latest news and information.