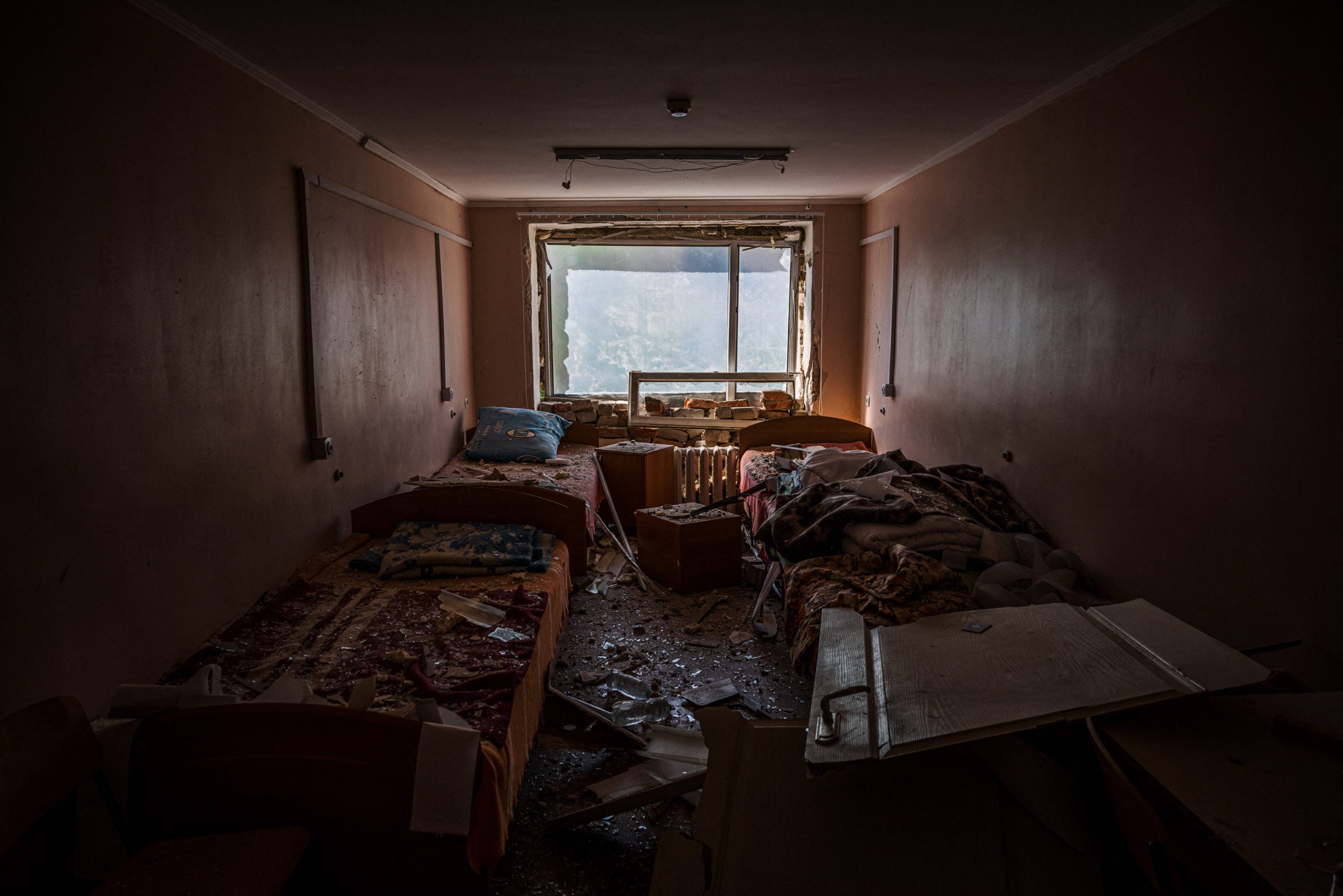 This picture taken on May 11, 2022, shows the damages inside the room of a hospital after shelling by Russian forces in the town of Orikhiv, near Zaporizhzhia, eastern Ukraine, on May 11, 2022, amid the Russian invasion. (Photo by Dimitar DILKOFF / AFP)

KYIV, Ukraine — Russia faced mounting accusations of war crimes in Ukraine Friday including forcing thousands of people into interrogation camps, as the number of refugees reported to have fled the conflict surpassed 6 million.

The Russian invasion has also led to a seismic policy change by Finland, whose leaders said Thursday the previously neutral nation must apply to join NATO “without delay” — triggering a blunt warning of retaliation from the Kremlin.

Throughout the 11-week conflict, Russian forces have been accused of committing atrocities — including the killing of unarmed civilians, torture and rape.

CNN and the BBC on Thursday released what they said was security camera footage showing Russian soldiers with assault rifles shooting two Ukrainian civilians in the back.

The two men appeared unarmed — the footage showed the soldiers frisking them before allowing them to walk away at a business premises on the outskirts of the capital Kyiv.

One man died on the spot, the other shortly after, according to the outlets.

The killings took place on March 16 and are being investigated as a war crime, CNN said. AFP has not independently verified the footage.

The incident took place on March 27 in the village of Stepanki outside Kharkiv, the Ukrainian prosecutor general’s office said on Telegram.

Local resident Denys, 40, said he saw the barrel of the tank turn towards him.

“Someone said: let’s go hide inside the house,” Denys said.

“I entered last and as soon as I entered, the tank fired. Everything collapsed, I couldn’t see anything.”

Ukrainian prosecutors say they have received reports of more than 10,000 alleged crimes.

The UN refugee agency said Thursday more than six million people had fled Ukraine, more than half of them going to neighbouring Poland.

Women and children make up 90 percent of the refugees, UNHCR said.

The United States on Thursday accused Russia of forcibly taking tens of thousands of Ukrainians to “filtration camps” in Russia or Russian-controlled territory where they are subjected to “brutal interrogations”.

“These actions amount to war crimes,” said Michael Carpenter, the US ambassador to the Organization for Security and Cooperation in Europe (OSCE).

“We must not allow this evil to stand.”

The remarks backed Kyiv’s allegation that 1.2 million people have been taken to Russia or Russian-controlled areas.

Fighting in Ukraine has been concentrated in the south and east since Russia abandoned attempts to seize the capital.

Ukraine’s presidency said shelling continued throughout Lugansk — part of the Donbas region where its forces are fiercely opposing Russian troops and Kremlin-backed separatists.

“What for? It’s nonsense. It’s barbarity,” he said.

In the northeastern region of Chernigiv, three people were killed and 12 others wounded early Thursday in a strike on a school in Novgorod-Siversky, the emergency services said.

In the southern port city of Mariupol, troops at the Azovstal steelworks have been holding out against Russian bombardment for weeks, refusing demands to surrender.

Russia’s army said it struck Donetsk and Kharkiv on Thursday, killing more than 170 people and destroying Ukrainian drones and rockets.

When launching the invasion of Ukraine, Russian President Vladimir Putin had cited in part what he called the threat from NATO, which has expanded eastwards since the end of the Cold War.

Rather than containing the bloc, however, the war appears to have had the opposite effect.

The leaders of Finland, a declared neutral state in East-West crises for decades, said Thursday their country should join the bloc.

“As a member of NATO, Finland would strengthen the entire defence alliance,” President Sauli Niinisto and Prime Minister Sanna Marin said in a joint statement.

The Russian foreign ministry warned Moscow would be “forced to take reciprocal steps, military-technical and other, to address the resulting threats”.

Finland shares a 1,300-kilometre (800-mile) border with Russia and its past is studded with conflict with its giant neighbour.

NATO has already declared it will warmly embrace Finland and Sweden, two countries with deep pockets and well-equipped militaries.

A special committee will announce Finland’s formal decision on Sunday. Sweden, another neutral state, is widely expected to follow.

The flow of gas from Russia to Europe meanwhile fell, spurring fears for Germany and other economies heavily dependent on that source of energy.

Gazprom also said gas transiting to Europe via Ukraine had dropped by a third.

Ukraine and Poland are major supply routes for Russian gas to Europe and the two sides have kept flows going despite the conflict.

Kuleba has been invited to the meeting of G7 foreign ministers in Germany, which started Thursday with the Ukraine war set to be the main topic on the agenda.