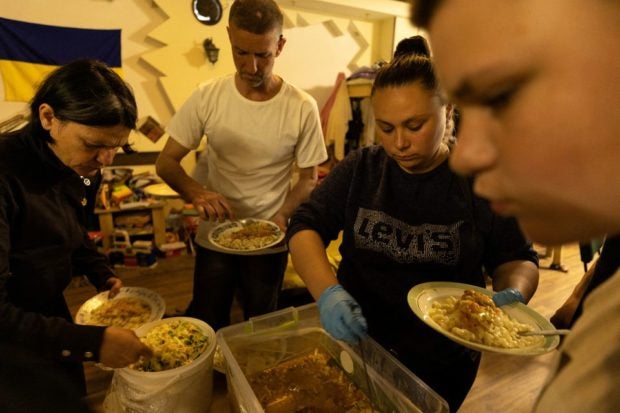 Internally displaced people from the Donbas region serve meal provided by the NGO World Central Kitchen, in a refugee shelter organized in a former coffee shop, amid Russia’s invasion of Ukraine, in Dnipro, Ukraine May 14, 2022. REUTERS

DNIPRO, Ukraine — Alla Dubovyk, a single mother of six, is among thousands of Ukrainians who have been receiving meal packages from the charity set up by businessman Vladyslav Shtipelman and the World Central Kitchen in Dnipro since the Russian invasion started.

“Unfortunately, we, Ukrainians, have been brought to a situation where we have to use humanitarian aid,” Dubovyk said.

Shtipelman and the World Central Kitchen have set up a food packing factory in Dnipro to provide groceries and meals for internally displaced people.

Using a production line , volunteers pack vegetables and other products in bags that are loaded onto trucks and delivered to villages around Dnipro where refugees are staying.

“The biggest challenges were getting it all up and running, literally within a few days to build the conveyors, establish the technological chains, the processes,” Shtipelman said.

The U.S. based World Central Kitchen, a non-governmental organisation providing meals in response to humanitarian, climate, and community crises, says it provides food to more than 2,000 distribution sites in Ukraine.

Olga Karachova said she was working as a wedding planner before the war and before becoming a volunteer at the kitchen.

“We understood the situation, that we have no time to think or to rest, we just need to hard work now,” Karachova said in English.

In the first days of the war, the kitchen in Dnipro prepared about 500 meals per day. Now, the number oscillates between 5,000-7,000 meals, she said.

The Russian invasion of Ukraine, now in its third month, has claimed thousands of civilian lives, displaced millions of Ukrainians and reduced cities to rubble.

Moscow calls its actions a “special military operation” to disarm Ukraine and protect it from fascists. Ukraine and the West say the fascism allegation is baseless and that the war is an unprovoked act of aggression.

Larysa, a 73-year-old English teacher, who declined to give her surname and who was picking up meal packages, said she was from Sievierodonetsk, a city in the eastern Ukraine region of Luhansk that was “like a garden” before the invasion.

“Now it is destroyed; it is a very great tragedy for my neighbours, for my relatives, for my pupils,” she said in English.