Russia says it shot down three Ukraine fighter jets, one near Snake Island 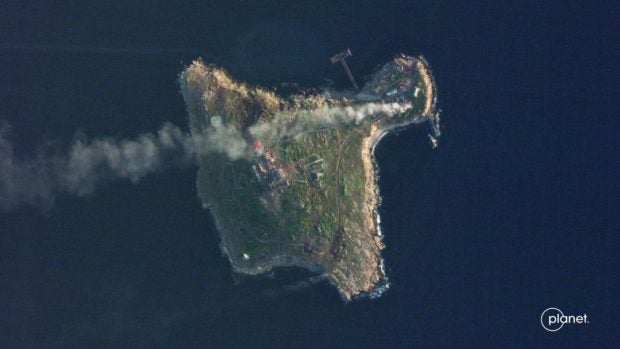 Satellite view shows smoke rising over Snake Island, Ukraine amid Russia’s attack on the country, May 8, 2022 in this handout image. REUTERS FILE PHOTO

Russia on Monday said its forces had shot down three Ukrainian fighter jets, one near Snake Island in the Black Sea and the others in the Mykolaiv and Kharkiv regions, while its missiles continued to pound targets in the east of the country.

Russia’s defense ministry said its forces shot down Su-25 aircraft near the settlements of Yevhenivka in the Mykolaiv region and Velyka Komyshuvakha in Kharkiv, and a Su-24 near Snake Island, which achieved worldwide fame in the conflict’s first hours when Ukrainian border guards stationed there rejected a Russian warship’s demand for their surrender.

Nearly three months since Russia sent tens of thousands of troops into Ukraine on Feb. 24, Russian and Russian-backed forces are still in control of an area of Ukraine about the size of Greece along the Sea of Azov and the Black Sea, and in Ukraine’s east bordering Russia.

Russian forces have been driven out of the area around the city of Kharkiv in the northeast in the past two weeks, their most rapid losses since being expelled from areas around Kyiv and the north of Ukraine at the start of April.

Russia, which annexed Crimea in 2014, is trying to capture the Donbas.

The ministry said it made similar strikes in the pro-Russian self-proclaimed republics of Donetsk and Luhansk, also taking out drones.

Russia said that since the start of the military operation, its forces had destroyed 168 aircraft, 125 helicopters, 889 unmanned aerial vehicles, 307 anti-aircraft missile systems, and 3,108 tanks and other armoured combat vehicles.

The reports from the Russian defense ministry could not be independently confirmed.