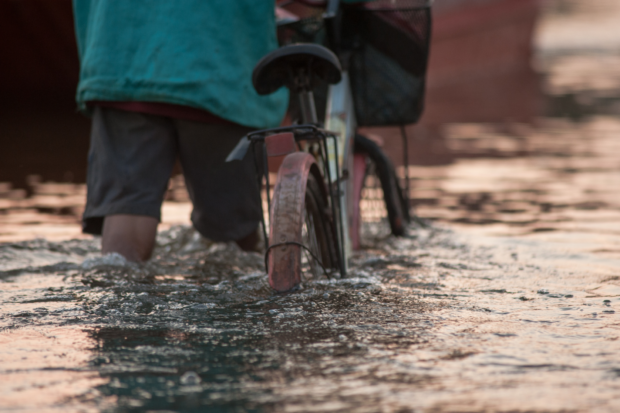 DEMYDIV, Ukraine — The intentional flooding of a small village north of Kyiv that created a quagmire and submerged cellars and fields, but prevented a Russian attack on the capital, was worth all the sacrifice, residents said.

Ukrainian forces opened a dam early in the war in Demydiv, causing the Irpin River to flood the village and thousands of acres around. The move has since been credited with stopping Russian soldiers and tanks from breaking through Ukraine’s lines.

“Of course, it was good,” said Volodymyr Artemchuk, a 60-year-old resident of Demydiv.

“What would have happened if they (Russian forces) …. were able to cross the little river and then went onto Kyiv?”

More than a third of some fields have been flooded, said Oleksandr Rybalko, 39.

Some two months later, people in the village were still dealing with the aftermath of the flooding, using inflatable boats to move around and planting whatever dry swaths of lands were left with flowers and vegetables.

Children were left with wetlands to use as playgrounds.

The Russian invasion, now in its third month, has claimed thousands of civilian lives, sent millions of Ukrainians fleeing and reduced cities to rubble.

Moscow calls its actions a “special military operation” to disarm Ukraine and protect it from fascists. Ukraine and the West say the fascist allegation is baseless and that the war is an unprovoked act of aggression.

Over the weekend, Russia pummeled positions in the east of Ukraine on Sunday, seeking to encircle Ukrainian forces in the battle for Donbas.

Read Next
Swiss switch to ‘presumed consent’ on organ donations
EDITORS' PICK
House energy committee chair Arroyo bats for cheap electricity
Bongbong Marcos to slain journalist’s kin: ‘We are ready to help’
Score lots of freebies and discounts on vivo 10.10. Sale
Smart awards ‘Subscribe & Get Lucky’ Raffle Promo winners
10,000 to less than 500: How people are driving the tamaraw to extinction
Marcos wants to accelerate efforts to build agricultural sector back
MOST READ
34 people killed in mass shooting at daycare center in Thailand
Marcos admin gets high approval ratings in Pulse Asia survey
Tulfo blasts DBM for ‘acting like God’ in cutting budget
Woman shot dead by live-in partner in Laguna
Don't miss out on the latest news and information.