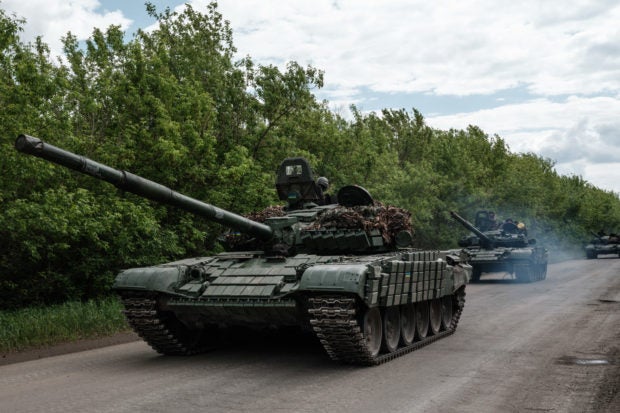 Ukrainian main battle tanks drive on a road near Bakhmut, eastern Ukraine, on May 15, 2022, amid the Russian invasion of Ukraine. AFP

The Finnish government officially announces its intention to join Nato while Sweden’s ruling Social Democratic Party says it is in favor of membership in response to Russia’s invasion of Ukraine.

Less than three months after Russia invaded Ukraine on February 24, it is a stunning reversal of Finland and Sweden’s policy on military non-alignment.

“This is a historic day. A new era is opening”, Finnish President Sauli Niinisto tells reporters at a joint news conference with Prime Minister Sanna Marin on Sunday.

“Turkey made it clear that its intention is not to block membership,” Stoltenberg tells reporters virtually after alliance foreign ministers met in Berlin.

“Ukraine can win this war. Ukrainians are bravely defending their homeland,” says the defence chief, adding that “we must continue to step up and sustain our… support to Ukraine”.

“Stefania”, which beat out a host of over-the-top acts at the quirky annual musical event, was written by frontman Oleh Psiuk as a tribute to his mother before the war — but its nostalgic lyrics have taken on wider meaning because of the conflict.

Russia has increasingly turned its attention to the country’s south and east since the end of March, after failing to take the capital Kyiv.

Western analysts believe President Vladimir Putin has his sights on annexing southern and eastern Ukraine in the months ahead but his troops appear to be encountering stiff resistance.

President Zelensky warns that the war in his country risks triggering global food shortages as he calls for more international backing.

“The sooner we liberate our land and guarantee Ukraine’s security, the sooner the normal state of the food market can be restored,” he adds.

Before the invasion, Ukraine exported 4.5 million tonnes of agricultural produce per month through its ports -– 12 percent of the planet’s wheat, 15 percent of its corn and half of its sunflower oil.