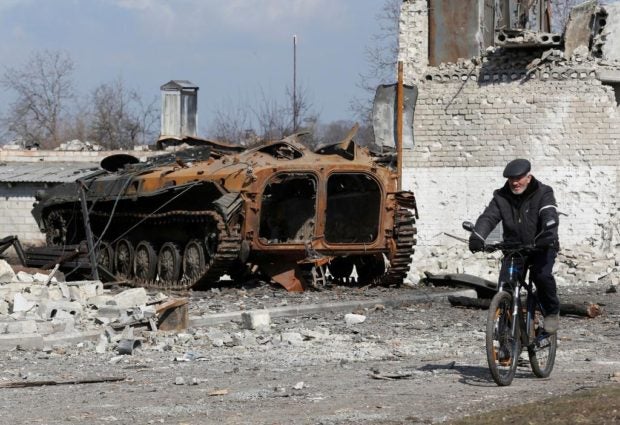 A local resident rides a bicycle past a charred armored vehicle during Ukraine-Russia conflict in the separatist-controlled town of Volnovakha in the Donetsk region, Ukraine March 15, 2022. REUTERS FILE PHOTO

RUSKA LOZOVA, Ukraine — Russia attacked positions in eastern Ukraine as it tries to encircle Ukrainian forces in the Donbas and fend off a counteroffensive around the city of Izium.

Nato Secretary-General Jens Stoltenberg said Russia’s offensive in Donbas had stalled and Ukraine could win the war, an outcome few military analysts predicted at the outset of the conflict.

“Russia’s war in Ukraine is not going as Moscow had planned,” Stoltenberg told reporters on Sunday.

In a strategic blow for Russia, which has long opposed Nato expansion, Finland on Sunday confirmed it would apply to join the Atlantic military alliance.

Nato and the United States said they were confident both countries would be accepted into the alliance and that reservations from Turkey, which wants the Nordic countries to halt support for Kurdish militant groups present on their territory, could be overcome.

Ukraine has scored a series of successes since Russia invaded on Feb. 24, reversing an advance on the capital Kyiv and driving Russian forces out of Kharkiv in the east.

Since mid-April, Russian forces have focused much of their firepower on trying to capture two eastern provinces known as the Donbas.

British military intelligence said Russia had lost about a third of the ground combat force deployed in February, and its Donbas offensive had fallen “significantly behind schedule”.

As well as losing large numbers of men and much military equipment, Russia has been hit by economic sanctions, while Western states have provided Ukraine with military aid.

Ukraine has deployed many of its new U.S. M-777 howitzers at the front lines, and Washington has delivered all but one of the 90 artillery pieces they were due to send, the U.S. embassy in Kyiv said.

U.S. lawmakers are set to press ahead this week with efforts to send more aid.

Moscow calls its invasion of Ukraine a “special military operation” to rid the country of fascists, an assertion Kyiv and its Western say is a baseless pretext for an unprovoked war.

Ukrainian troops received a morale boost from the country’s win in the Eurovision song contest on the weekend, with some saying it was a sign of battlefield victories to come.

“We have shown that we can not only fight, but we can also sing very nice,” said Vitaliy, a soldier bunkered down north of Kyiv.

The most intense fighting appeared to be around the eastern Russian-held city of Izium, where Russia said it had struck Ukrainian positions with missiles.

Russia continued to target civilian areas along the entire front line in the Luhansk and Donetsk regions, firing at 23 villages and towns, the task force added.

Reuters was not able to independently confirm the reports. Russia denies targeting civilians.

If Ukraine can sustain pressure on Izium and Russian supply lines, it will be harder for Moscow to encircle Ukrainian troops in the Donbas.

In western Ukraine near Poland, missiles destroyed military infrastructure overnight on Saturday and were fired at the Lviv region from the Black Sea, Ukrainian officials said.

Another 10 civilians were wounded in the southern region of Mykolaiv, the regional council said, without providing details.

There was also no letup on Sunday in Russia’s bombardment of the steelworks in the southern port of Mariupol, where a few hundred Ukrainian fighters are holding out weeks after the city fell into Russian hands, the Ukrainian military said.

Brightly burning munitions were shown cascading down on the steel works in a video posted by a pro-Russian separatist commander.

Ukrainian President Volodymyr Zelensky said “very difficult and delicate negotiations” were going on to save Ukrainians in Mariupol and Azovstal.

In port city, some residents ate and talked outside their burnt out apartment building, which was shelled and caught fire in early April.

“I was in the kitchen when the smoke appeared,” one resident named Natalya said. “I started carrying out my belongings, saving what I could.”

She said three neighbors had died in the fighting.