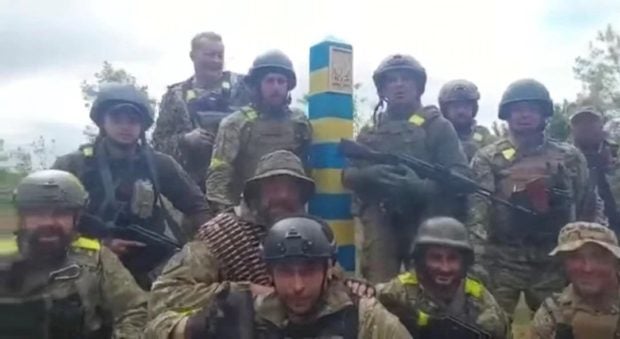 Ukrainian troops stand at the Ukraine-Russia border in what was said to be the Kharkiv region, Ukraine in this screen grab obtained from a video released on May 15, 2022. Ukrainian Ministry of Defence/Handout via REUTERS

KYIV — Ukraine said on Monday troops defending the country’s second-largest city, Kharkiv, had repelled Russian forces and advanced as far as the border with Russia.

Reuters could not immediately verify Ukraine’s battlefield account and it was not clear how many troops had reached the Russian border and where.

If confirmed, it would suggest a Ukrainian counter-offensive is having increasing success in pushing back Russian forces in the northeast after Western military agencies said Moscow’s offensive in the Donbas region had stalled.

Ukraine’s defence ministry said in a Facebook post that the 227th Battalion of the 127th Brigade of Ukraine’s armed forces had reached the border with Russia, adding: “Together to victory!”

Kharkiv region governor Oleh Sinegubov wrote on the Telegram messaging app that troops of the 227th Battalion had restored a sign on the state border.

“We thank everyone who, risking their lives, liberates Ukraine from Russian invaders,” Sinegubov said.

Ukraine has scored a series of successes since Russia invaded on Feb. 24, forcing Russia’s commanders to abandon an advance on the capital Kyiv before making rapid gains around Kharkiv.

Moscow calls its invasion of Ukraine a “special military operation” to rid the country of fascists, an assertion Kyiv and its Western allies say is a baseless pretext for an unprovoked war.