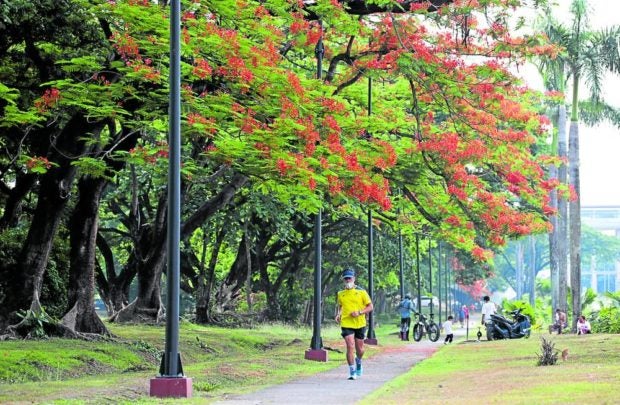 FIND YOUR SPOT Joggers, bikers and picnickers soak in nature’s beauty under a canopy of fire trees along University Avenue of the University of the Philippines campus in Diliman, Quezon City, on Sunday morning, hours before rain drenched parts of Metro Manila. —NIÑO JESUS ORBETA

MANILA, Philippines — The Inter-Agency Task Force for the Management of Emerging Infectious Diseases (IATF) has retained the most relaxed Alert Level 1 status for the entire Metro Manila (the National Capital Region or NCR) and various provinces, cities and municipalities from May 16 to 31, Malacañang announced on Sunday.

He quoted the IATF secretariat as saying that following the new classifications, there are already 79 provinces, highly urbanized cities (HUCs) and independent component cities (ICCs), as well as 160 other cities and municipalities, that are under alert level 1.

Andanar said the alert levels imposed by previous IATF resolutions on other component cities and municipalities not mentioned in Sunday’s announced classifications would also remain in effect until May 31.

The country’s economic managers have been pressing the implementation of the lowest alert level nationwide to fast-track the return of more employment opportunities as joblessness in the country remained among the highest in emerging Asia.

The number of jobless Filipinos declined to 3.7 million in 2021 from the 15-year high of 4.5 million the year before, which was the height of the longest and most stringent COVID-19 lockdowns.

“To help insulate the economy from external pressures, there is a need to shift the entire country to alert level 1,” according to the state planning agency National Economic and Development Authority (Neda), mainly referring to the spillover impact on the global economy of Russia’s invasion of Ukraine.

At the start of April, 79 percent of the country was already under alert level 1 pandemic restrictions, allowing the further reopening of more productive sectors.

“The easing of classification in the remaining areas will help generate more employment and income opportunities,” Neda said.

Unemployment further declined in March to 5.8 percent, the lowest level during the prolonged COVID-19 crisis.

Socioeconomic Planning Secretary and Neda chief Karl Kendrick Chua said this reflected the gains from moving around 70 percent of the economy to alert level 1.

“As we continue to manage the risks, we reiterate our recommendation to shift the entire country to alert level 1 to generate more employment and strengthen the domestic economy against external shocks,” he added.

Trade Secretary Ramon Lopez had pointed out that placing the entire country under alert level 1, together with the expansion of in-person classes, could cushion the impacts of the war between Russia and Ukraine.

Lopez said the shift last April to the lowest alert level in Metro Manila and 38 other areas was a huge help to the economy, but it would be better if pandemic restrictions in the entire country would also be relaxed together with the resumption of in-person classes.

However, health officials have cautioned against such move, warning that the government should be careful in easing restrictions to avoid wasting recent gains in addressing the pandemic.

This is due to the new Omicron subvariant BA.2.12.1 and the Department of Health has projected that COVID-19 infections and hospitalizations could peak at higher levels, compared to the Delta and Omicron surges, although it remained cautious in announcing a local transmission despite the discovery of two infected Filipinos without travel history outside the country.