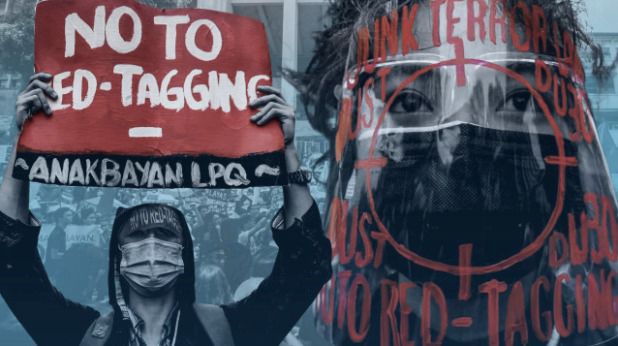 MANILA, Philippines—As the 2022 elections drew closer, attacks against the progressive Koalisyong Makabayan (Makabayan) had intensified and even persisted on Election Day itself.

Last Sunday (May 8), the eve of the elections, political activities to promote the election or loss of a person seeking an elective office were already prohibited, but the attacks still went on with impunity. 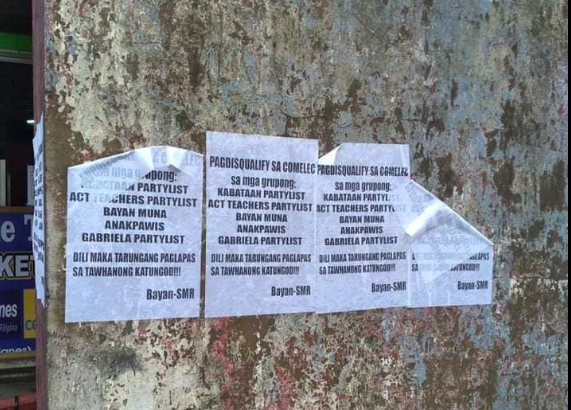 It stressed that the posters do not only attack opposition candidates as they also create a climate of terror that discourages voters from voting conscientiously. “This has a chilling effect,” it said.

In this election, Makabayan fielded Neri Colmenares and Elmer Labog for the Senate while five party list groups—ACT Teachers, Anakpawis, Bayan Muna, Gabriela and Kabataan—are seeking seats in the House of Representatives.

Kabataan said the posters linking it to the Communist Party of the Philippines (CPP) and the New People’s Army (NPA) were spread as Commission on Elections (Comelec) announcements. The bogus materials also claimed the Makabayan party list groups had been disqualified.

Looking back, the spread of the posters on Election Day is the latest in a string of attacks against Makabayan. Last Saturday (May 7) a fake Comelec resolution which “perpetually disqualifies” Makabayan was spread online.

This was condemned by Rep. Carlos Zarate (Bayan Muna) as “a desperate scheme of fascists,” saying that it is clearly fake: “It is clear that any candidate cannot be disqualified without notice or answer or comment on the petition against them.”

“I was in contact with [those] who supposedly signed the resolution, Commissioners Inting, Ferolino, and Neri, and we are stating that this document circulating regarding certain party lists and senatorial candidates is fake and spurious,” he said.

Reminiscent of past elections

In 2019, Kontra Daya asked the Comelec to investigate the police and military who were seen engaging in partisan activities against Makabayan.

This, as Kontra Daya received reports of death threats, harassment, intimidation and red-tagging of Makabayan and its people from all over the Philippines. 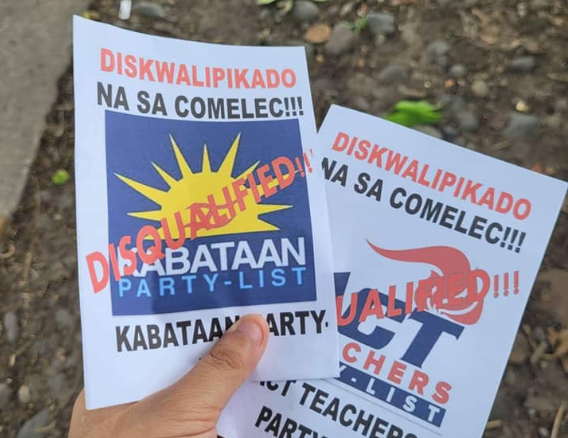 FRAUD OPERATIONS. Flyers against Kabataan and ACT Teachers are given out to voters in Negros Oriental. PHOTO FROM KABATAAN

The most brazen, one of its convenors said, was the distribution of the PNP’s newsletter in Sampaloc, Manila’s Geronimo Elementary School linking Bayan Muna and Kabataan to the CPP-NPA.

Section 261 (i) of the Omnibus Election Code said that, “Any office or employee in the civil service, except those holding political offices; any officer, employee, or member of the Armed Forces of the Philippines, or any police force, special forces, home defense forces, barangay self-defense units and all other para-military units that now exist or which may hereafter be organized who, directly or indirectly, intervenes in any election campaign or engages in any partisan political activity, except to vote or to preserve public order, if one is a peace officer, shall be guilty of an election offense.”

In 2013, Anakpawis condemned a text blast asking Filipinos to not vote for them and the rest of the Makabayan party list groups. It said the Armed Forces of the Philippines behind the black propaganda. 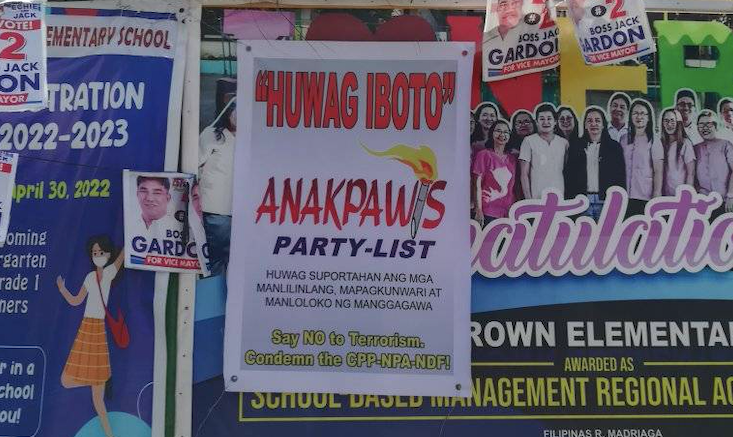 RELENTLESS ATTACK. A poster against Anakpawis is seen near a polling center in Olongapo City. PHOTO COURTESY OF MA. CRISTINA GUEVARRA

Despite the attacks, however, four of the five party list groups under Makabayan managed to win seats in Congress in 2019—Bayan Muna (3 seats), ACT Teachers (1 seat), Gabriela (1 seat), Kabataan (1 seat):

The group Center for People Empowerment in Governance said Makabayan has a “hardcore electoral base” of three million votes as shown by its average votes in the House of Representatives in past elections––2010, 2013, 2016 and 2019.

“A more expansive electoral base for Makabayan reaches close to six million votes average nationwide if the results for Senate elections for Makabayan bets are considered, also since the 2010 elections.”