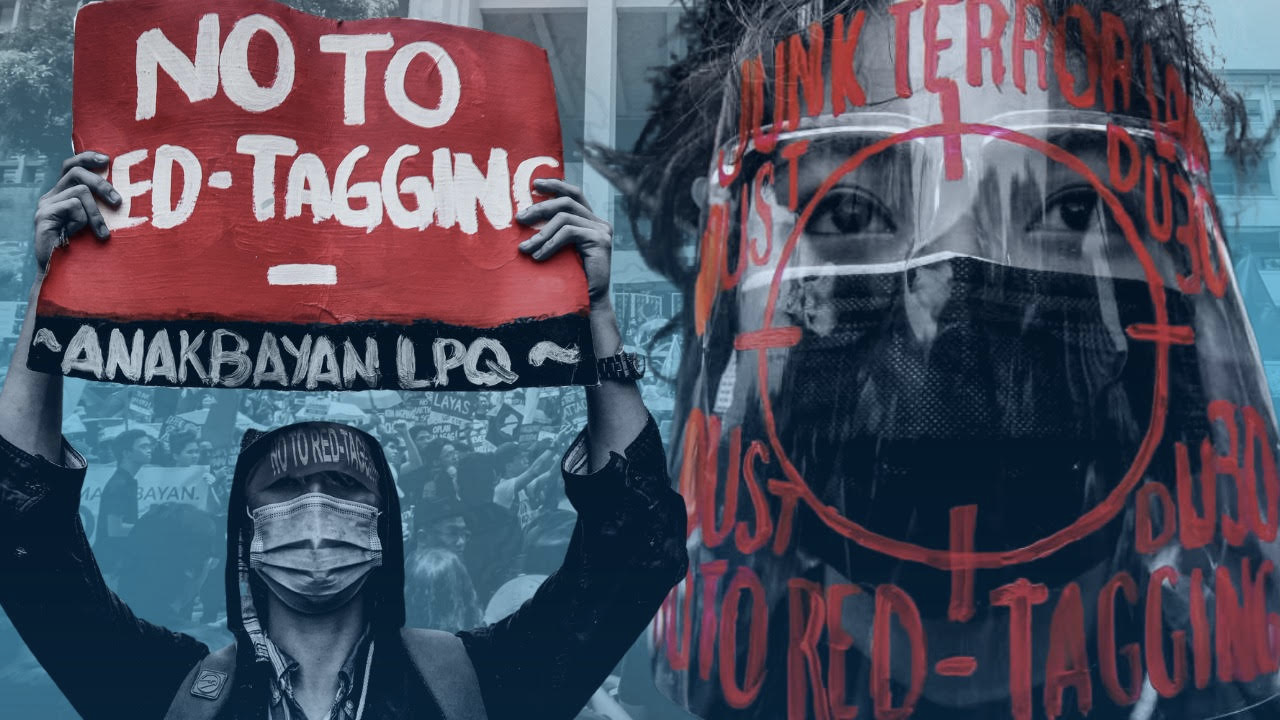 MANILA, Philippines—While Lorraine Badoy said that red-tagging is not dangerous, at least 427 activists—slain after they were red-tagged—could show otherwise, according to the human rights group Karapatan, which itself had been red-tagged.

The “Danger in Dissent: Counterterrorism and Human Rights in the Philippines” report by the International Commission of Jurists stressed that red-tagging often has deadly consequences, saying that there were people who were killed after they were red-tagged.

This, however, did not stop Badoy, one of the spokespersons of the National Task Force to End Local Communist Armed Conflict (NTF-Elcac) from saying that Vice President Leni Robredo is conspiring with communist rebels.

Last March 14, Badoy said that since Joma Sison, the founder of the Communist Party of the Philippines (CPP), endorsed Robredo on Twitter, it was proof “that this marriage made in the bowels of hell has been consummated.”

Even without evidence, Badoy said that the Makabayan bloc’s endorsement of Robredo was an endorsement of the Central Committee of the CPP, New People’s Army (NPA) and the National Democratic Front (NDF).

Robredo and the CPP dismissed Badoy’s “new low”. The Vice President, who is running for president, said no coalition government is being contemplated while the CPP said it has not made any agreement with anyone.

But the Vice President’s dismissal was not enough for Badoy who said on Monday (March 21) that anyone who can’t condemn the CPP-NPA-NDF is “not worthy of our trust and will use the powers of his or her office to torment us.”

She said that as what “former CPP-NPA-NDF cadres” told her, “it is impossible” for Robredo not to have known: “This endorsement was earned by the Vice President after a series of negotiations […] where she agreed to concessions.” 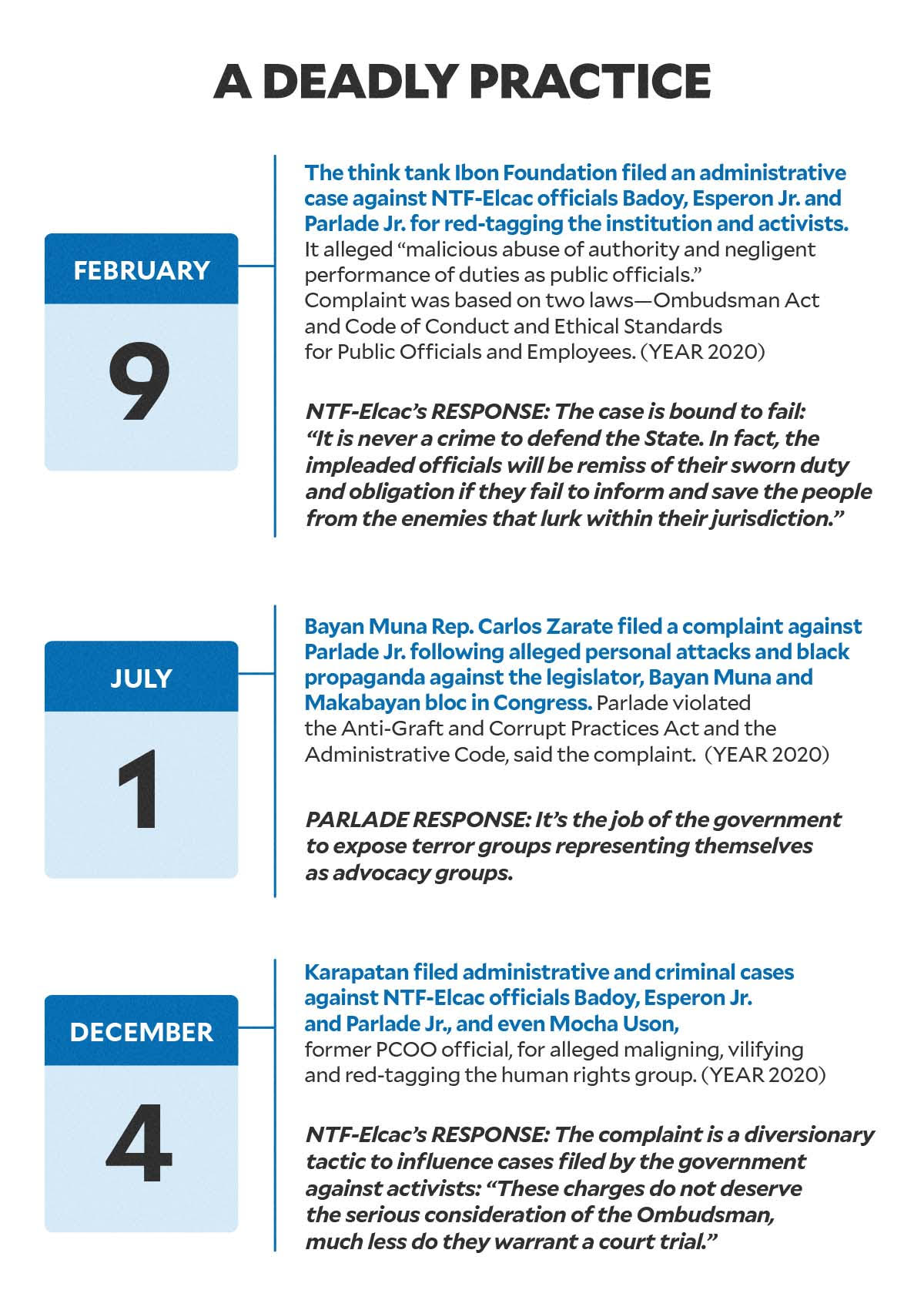 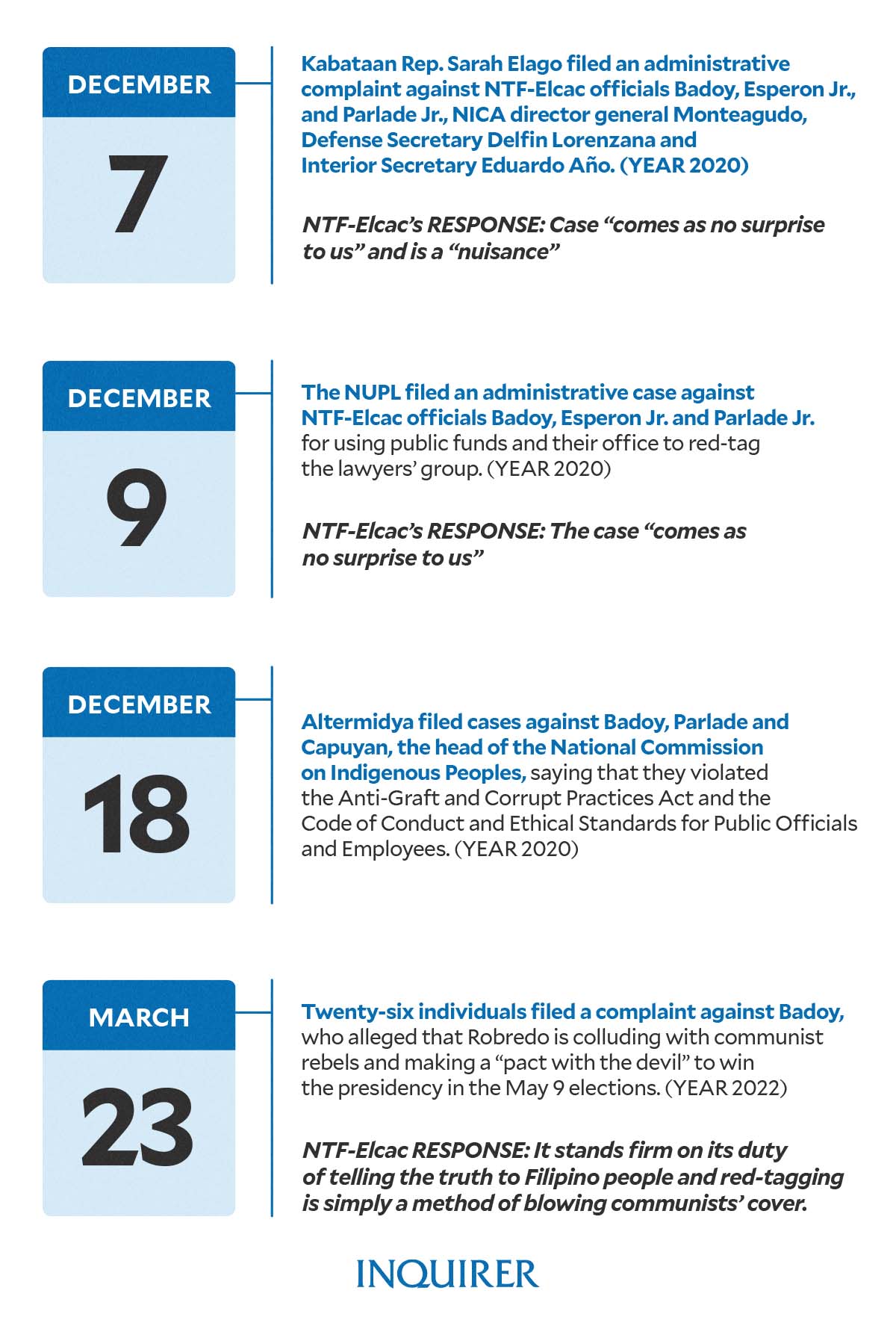 These remarks of Badoy, who also works for the Presidential Communications Operations Office (PCOO), did not sit well with 26 individuals who filed complaints against her on Wednesday (March 22).

They said, “defaming and intimidating a fellow public official, much more ordinary citizens, is inappropriate for the position of Usec Badoy.”

“A person who initiates and spreads fake news has no place in government and the dominant state media,” they said.

These complaints, which were filed at the Office of the Ombudsman by activists who were likewise red-tagged by the NTF-Elcac, was the latest in a string of complaints filed against her and other NTF-Elcac officials:

The “first and historic” red-tagging case, it stressed that the officials committed “malicious abuse of authority and negligent performance of duties as public officials” when they vilified activists and the institution.

This came as Badoy tagged the Ibon Foundation, an economic think tank, as a “communist front” when its head researcher, Rosario Guzman, fact-checked the PCOO’s Duterte Legacy on One News’ The Chiefs.

It said the remarks of the NTF-Elcac officials, which even went beyond saying that the think tank is radicalizing the youth, violated the Code of Conduct and Ethical Standards for Public Officials and Employees.

But for the NTF-Elcac the case was “perfectly bound to fail,” saying that it was never a crime to defend the State. It said “if they fail to inform and save the people,” they will be remiss of their sworn responsibility and obligation.

Bayan Muna Rep. Carlos Zarate filed a case against Parlade at the Office of the Ombudsman. He said Parlade had red-tagged him and Bayan Muna party-list while they were campaigning in the 2019 elections.

He said Parlade publicly attacked his person and character and that he engaged in black propaganda and negative campaigning against him, Bayan Muna and Makabayan.

Zarate said that Parlade’s remarks constitute prohibited political campaign activity. He stressed that the then military general violated the Anti-Graft and Corrupt Practices Act and the Administrative Code.

He stressed that Parlade’s remarks violated Section 55 of the Administrative Code which prohibits individuals, who are part of the Armed Forces of the Philippines (AFP), from participating in “partisan political activity”.

Parlade responded that to tell the people and expose to them the real nature of Bayan Muna and similar groups as communist fronts was not a criminal offense.

Palabay said that the NTF-Elcac, especially Parlade, repeatedly alleged that Karapatan has links with the NPA. Even the Civil Relations Service of the AFP shared Parlade’s allegation that Karapatan is a “terrorist front”.

The respondents violated the principle of distinction as stated in international and domestic law, stressing that the government signed the Comprehensive Agreement on Respect for Human Rights and International Humanitarian Law.

Likewise, Palabay said that red-tagging constitutes a violation of the Philippine Act on Crimes Against International Humanitarian Law, Genocide, and Other Crimes Against Humanity.

The NTF-Elcac, however, said that the complaints were only a “tactic” to divert people’s attention on the cases filed by the government against activists: “The charges do not deserve the serious consideration of the Ombudsman.”

Filed at the Office of the Ombudsman, the 42-page complaint stressed that as stated in The Ombudsman Act, the respondents’ actions should be investigated.

She said red-tagging her and Kabataan party-list was rife with lies and are malicious and misleading. “They are done in bad faith and in direct affront to professionalism and political neutrality.”

This, she said, constitutes a violation of the Code of Conduct and Ethical Standards for Public Officials and Employees. She stressed that the officials intentionally committed grave misconduct and malfeasance.

The National Union of People’s Lawyers (NUPL) filed a case against Badoy, Esperon and Parlade, saying that they allegedly used public resources and their public offices to red-tag NUPL.

It said the NTF-Elcac “relentlessly, baselessly and maliciously, without any credible, competent and admissible evidence” vilified NUPL. It stressed that this is “contrary to law, oppressive, unfair, discriminatory and devoid of justification.”

The NUPL said that over the years, people’s lawyers were red-tagged. Some even received threats while some have survived killings or ended up dead, like lawyers Rodolfo Felicio and Benjamin Ramos.

“The pattern is crystal clear: the complainants and its lawyers are being discriminated, persecuted and harassed for their membership with the NUPL and on account of the cases, clients, and advocacies that they take on.”

The NTF-Elcac, however, described the complaints filed by NUPL, Kabataan and Karapatan as “nuisance” cases against people who she said were the ones who have taken off the “masks” of NUPL and  similar groups.

The AlterMidya, a network of alternative media outlets, asked the Office of the Ombudsman to dismiss Badoy, Parlade and National Commission on Indigenous Peoples head Allen Capuyan over their baseless red-tagging.

They alleged that the officials violated the Anti-Graft and Corrupt Practices Act and the Code of Conduct and Ethical Standards for Public Officials and Employees.

AlterMidya, Bulatlat, Kodao Productions and Pinoy Media Center said Parlade and Badoy alleged that the media outfits were “long-time cohorts” of the CPP. Parlade said the alternative media network was created by the CPP.

They asked the Office of the Ombudsman to place the officials on preventive suspension while an investigation is being conducted and then dismiss them from service with “forfeiture of benefits”.

Capuyan, in a Senate investigation, likewise red-tagged AlterMidya. In a presentation, he alleged that AlterMidya and the rest of the network are part of the CPP’s National Propaganda Bureau.

As Badoy alleged that Robredo was conspiring with rebels and that she made a “pact with the devil” to win the presidency, 26 individuals filed three separate complaints at the Office of the Ombudsman.

The complaints said Badoy violated the Anti-Graft and Corrupt Practices Act and the Code of Conduct and Ethical Standards for Public Officials and Employees and that she should be investigated.

Some of the individuals who filed the complaints were former Kabataan Rep. Raymond Palatino and Delfin Castro, older brother of Dr. Natividad Castro. They likewise asked that Badoy be suspended until the end of the present regime.

The NTF-Elcac said it stands firm in its responsibility of speaking the truth to the Filipino people, stressing that red-tagging is a tool used by those she described as “CPP-NPA-NDF fronts” to silence those who are about to blow their cover.

Badoy repeatedly said that the Supreme Court (SC) had decided that “there is no danger to life, liberty and security when one is identified as a member of the CPP-NPA-NDF.”

But Edre Olalia, the president of NUPL, said there was no such decision by the SC “or any court for that matter”. He said last year that Badoy was taking a court decision out of context.

Badoy said then: “How is it possible that our own legislators ignore what the Court of Appeals (CA) and the Supreme Court have already made clear: that there is no such thing as ‘red-tagging’?”

In a fact-check by Vera Files, it was shown that while the CA decision said that there is lack of “substantial evidence to establish the petitioners’ allegations, “nowhere in the ruling does it assert there is no red-tagging.”

Olalia said that a correct reading and understanding of the SC resolution on Zarate v. Aquino, G.R. No. 220028 would disclose that Badoy’s claims have no basis.

“It did not say that red-tagging is not dangerous, much less that it does not exist,” he said.

For Olalia, Badoy was either “misreading, misquoting or even misrepresenting an official document by the highest court of the land.”

Here in the Philippines, red-tagging is the act of labeling a group or individual as part of the CPP-NPA-NDF. This often results in their persecution and prosecution, or sets them up for attacks by State or pro-State forces.

For instance, Zara Alvarez, a paralegal of Karapatan, was killed on Aug. 17, 2020 in Negros Occidental. When she was still alive, her photo was seen on a red-tagging hit list which likewise had the photo of slain lawyer Ramos.

Likewise, Bernardino Patigas, an official of the North Negros Alliance of Human Rights, was killed on April 22, 2019. He was vilified and his photo was seen on a red-tagging hit list allegedly posted by the police in Moises Padilla town.

Last year, the United Nations Office of the High Commissioner on Human Rights recognized incidents of red-tagging in the Philippines, saying that it was the act of labelling a group or individual as communist or terrorist.

Remulla said he agreed when told of the possibility that the Left and the Robredo camp already “joined forces”: “The CPP-NPA-NDF and the pink camp, they’re now allies.”

Sen. Ping Lacson, who is likewise seeking the presidency, said on March 6 when he shared a news article on Remulla’s allegations that it is “worrisome” when government officials form a coalition with communist rebels.

Anakpawis, which is part of Makabayan, said last March 10 that some of its volunteers, who were likewise campaigning for Robredo, were arrested.