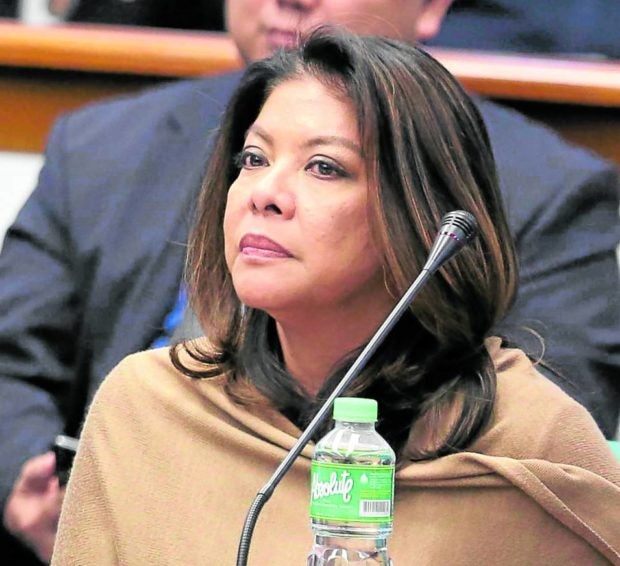 MANILA, Philippines — More criminal complaints of alleged red-tagging were filed on Wednesday against Lorraine Badoy, a spokesperson for the government’s anti-communist task force who had accused Vice President Leni Robredo of colluding with communist rebels and making a “pact with the devil” to win the presidency in the May 9 elections.

Three separate complaints were filed by 26 individuals who were represented by lawyers Antonio La Viña and Rico Domingo. They asked Ombudsman Samuel Martires to suspend Badoy, one of the spokespersons for the National Task Force to End Local Communist Armed Conflict (NTF-Elcac), for violating the antigraft law and the code of conduct for public officials.

In the Philippines, Red-tagging is the labeling of groups or individuals as part of the Communist Party of the Philippines (CPP), the New People’s Army (NPA) and the National Democratic Front of the Philippines (NDFP), vilifying them in the public eye. This often results in their persecution and prosecution, or sets them up for attacks by state or prostate forces.

ACT Teachers Rep. France Castro said in a statement that Red-tagging had “perilous consequences” and persons in authority using taxpayer money must not be allowed to use this “dastardly tactic.”

“It is high time for a legal pushback against the peddling of malicious and baseless lies as well as the peddler herself,” said Castro, who represents the Alliance of Concerned Teachers (ACT) one of the groups Red-tagged by Badoy and the NTF-Elcac.

‘No danger to life’

“No one is safe from red-taggers—not the Vice President who has shown the alternative to the current regime, not community pantries, not the average Facebooker or TikToker articulating his or her choices online,” Castro said.

In a statement reacting to the complaints, Badoy said the term was being used by “fronts” of the communist rebel groups “to silence those who are about to blow their cover.”

She said that the Supreme Court had ruled that “there is no danger to life, liberty and security when one is identified as a member of the CPP-NPA-NDF.”

But human rights lawyer Edre Olalia, president of the National Union of Peoples’ Lawyers (NUPL), said there was no such ruling by the Supreme Court “or any court for that matter.”

Badoy said the NTF-Elcac was determined to end the 53-year-old “communist terrorist scourge and this includes speaking the truth about politicians who form unholy alliances with the CPP-NPA-NDF and who lend them material support to meet their own selfish political ambitions at the expense of our people and the destiny of our country.”

One of the complaints was filed by former Kabataan Rep. Raymond Palatino, who said Badoy identified him as head of the Metro Manila Regional Party Committee of the CPP.

He was joined in the complaint by journalist Pocholo Concepcion, Delfin Castro Jr., the elder brother of detained Dr. Maria Natividad Castro who was also Red-tagged by Badoy, and four others.

The complaint cited a March 13 post by Badoy on the NTF-Elcac Facebook page in which she called out Robredo’s camp for “pretending they have not made a pact with the devil, the communist terrorist CPP-NPA-NDF” and forming a “tactical alliance” with them.

Tabacon, former president of ACT Northern Mindanao, was arrested and detained for more than a year on charges of arson, kidnapping and robbery with violence along with several human rights activists in Agusan del Sur.

The cases were dismissed in December 2021 after Judge Fernando Fundalan of the Regional Trial Court Branch 7 in Bayugan City quashed the warrants of arrest due to the “inordinate delay of reinvestigation.”

ACT said that the alleged trumped-up cases against Tabacon affected her personal life and she was forced to file for early retirement in fear of her security.

The 50-year-old single mom, who taught grade school math, English and social studies at Camaman-an Elementary School in Cagayan de Oro City, was also forced to move away from her six children to protect them from the unceasing threats against her, the group said.

Quetua, 49, who teaches social sciences at Carlos Albert High School in Quezon City and the president of ACT National Capital Region, has been included in posters of Red-tagged individuals and branded as a communist “recruiter.”

The third complaint was filed by 17 youth leaders from various universities, among them Jandeil Roperos, president of the National Union of Students of the Philippines and third nominee of Kabataan party list.

This is not the first time that Badoy has faced such complaints at the Office of the Ombudsman.

The nonprofit research group Ibon Foundation filed a case of Red-tagging against Badoy, retired Lt. Gen. Antonio Parlade Jr. and National Security Adviser Hermogenes Esperon Jr. in February 2020. Ibon lamented that the Ombudsman had been “sitting” on the case.

Domingo said Badoy has been making allegations without proof and wanted those she had accused to prove that they were not communists.

“What is that argument?” he said. “We will not let these acts just pass by. What will we say to the future generation if we are asked what we did during this time?”Badoy had also suggested that CNN Philippines could have links to the League of Filipino Students (LFS) and the College Editors Guild of the Philippines (CEGP), which she said were “known fronts” of the CPP-NPA-NDF.

In a Facebook post in November 2020, Badoy noted that the network was “tweeting and retweeting” calls for donations by the LFS, saying: “Wassup CNN? Is it true there is a LFS/CEGP cell inside CNN?”

Both Badoy and Parlade also “Red-tagged” Ana Patricia Non, the woman behind the community pantry movement, saying she and other organizers of free food stations were being used for communist propaganda.

—WITH REPORTS FROM JEANNETTE I. ANDRADE, JANE BAUTISTA, JEROME ANING AND INQUIRER RESEARCH