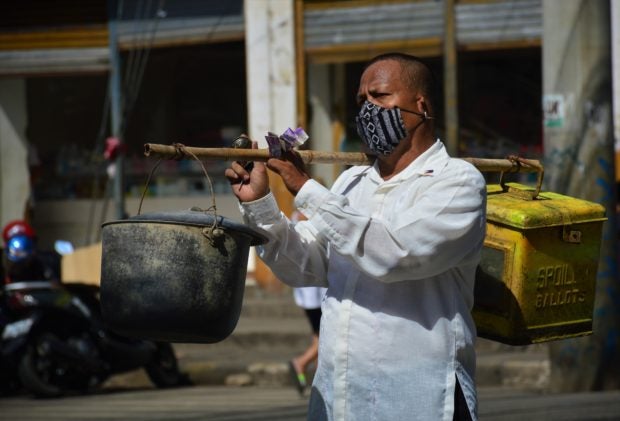 Multi-talented artist Nicolas ‘Nic’ Aca stages a street performance to promote his anti-vote-buying advocacy outside the Cogon public market in Cagayan de Oro Saturday, May 7, 2022. Aca hopes that through his advocacy, people will think twice before accepting money from political candidates ahead of the national and local elections on May 9, 2022. (Jigger Jerusalem)

CAGAYAN DE ORO CITY, Philippines – Wearing a long-sleeved white Barong Tagalog, with matching slacks and black shoes, Nicolas “Nic” Aca could easily be mistaken for a politician or a lawyer.

But a bamboo pole he carried on his shoulder as he stood in the middle of one of the busiest thoroughfares here two days before the May 9 elections, prompted vendors and market goers to take notice.

Pitched on one end of the pole was a cooking pot while on the other end was a discarded ballot box.

“Boto dili ibaligya” (Votes are not for sale),” Aca, the resident artist and gallery curator at the Capitol University’s Museum of Three Cultures and chairperson of the City Historical and Cultural Commission, told each passerby.

He said the cooking pot symbolized the “goto,” or the most likely thing that they could buy from the measly amount that politicians pay to buy their votes; while the used ballot box served as a reminder for people of their right to vote.

“The props are to show our countrymen that they should vote for (those candidates that) they think are qualified and that they must not accept money that will go away (after buying a pot of goto),” he explained.

Braving the heat of the sun and the danger of being run over by oncoming vehicles, he stood in the middle of the four-lane road beside the Cogon public market.

“This is my way of appealing to the people not to sell their votes,” said the 53-year old artist after his performance on the city’s busy J.R. Borja St..

He said he had been doing this street version of voter’s education in the last five elections since 2004.

Aca said there had been electoral candidates who were highly qualified but who would never make it on election day because they did not have money to give away to voters.

“There are many deserving candidates who I know can serve the people better but the electorate won’t even give them a second glance since they cannot provide for the ‘ulan-ulan,’ (drizzle),” he said.

“Ulan-ulan” (drizzle) is a slang for cash given by political candidates to voters on the night before the elections, usually delivered by campaign workers on residents’ doorsteps.

“Their political career won’t take off just because of that – they have no money,” Aca said, referring to candidates who had no extra cash to give to voters.

Aca lamented that in the current political landscape, only those who were financially capable could mount a campaign that had chances of winning. “What makes it worse is the culture of “utang na loob” (debt of gratitude) prevalent among Filipinos,” Aca added.

He said “utang na loob” would push many Filipinos to vote for those who gave them cash and other favors. “This has become a cancer. I hope the next generation will not adopt this practice. We must change it,” he said. Besides, the money given to voters will not last a long time, he added.

“Juan dela Cruz is given P500 to P1,000 by the politician. That is only equivalent to a ‘goto’ (porridge),” he said, explaining his props on the bamboo pole.

Nestor Sablaon, a food vendor at the Cogon public market here, agreed with Aca. “We must not sell our vote because it is sacred,” Sablaon said. “We must choose the right candidates, from the barangay officials to the president.”

Vote buying is a form of corruption that must be stopped, he added.

“We must not wait for ‘ulan-ulan’ and ‘ayuda’ (government aid). We must do away with them. Most of us can still eat three times a day, even with just ‘bulad’ (dried fish) and ‘ginamos’ (salted fish),” Sablaon added.

If only people would strive hard, there would be no need for them to depend on politicians for help.