The unseen stories of hope in massive ‘pink’ crowds Aerial shot of Ayala Avenue and Makati Avenue as of 4:30 p.m. ahead of Robredo-Pangilinan’s Miting de Avance, May 7, 2022. PHOTO TEAM KIKO/JIMMY DASAL

MANILA, Philippines—As Vice President Leni Robredo made her final pitch to voters on Saturday (May 7), Ayala Avenue in Makati City was bursting in its seams with people and the inspiring stories they carried with them.

The Robredo People’s Council said the miting de avance of Robredo and Sen. Kiko Pangilinan, her running mate, drew 780,000 people who defied the extreme heat to be present in the historic event. Police estimate of the crowd number was unavailable.

The Ayala Avenue crowd, according to organizers, was the biggest since Feb. 8, when an estimated 15,000 Robredo supporters, now known as kakampinks because of the color that Robredo chose to be her brand, filled Plaza Quezon in Naga City as Robredo launched her campaign.

READ: ‘Kakampinks’ in show of force for Robredo in Bicol, NCR as polls near

According to organizers, the previous biggest crowd record was 412,000, when Robredo celebrated her birthday on April 23 in Pasay City’s Macapagal Boulevard. Last Friday (May 6), Naga City’s Magsaysay Avenue drew 306,000.

While the crowd numbers drew the most attention, unseen are the stories that people at the rallies brought with them.

Fe delos Reyes, a 65-year-old resident of Pasay City, already saw six presidential elections since the ouster of the late dictator Ferdinand Marcos during the Edsa People Power Revolt of 1986. She told INQUIRER.net that this was the first time she went to a campaign rally. 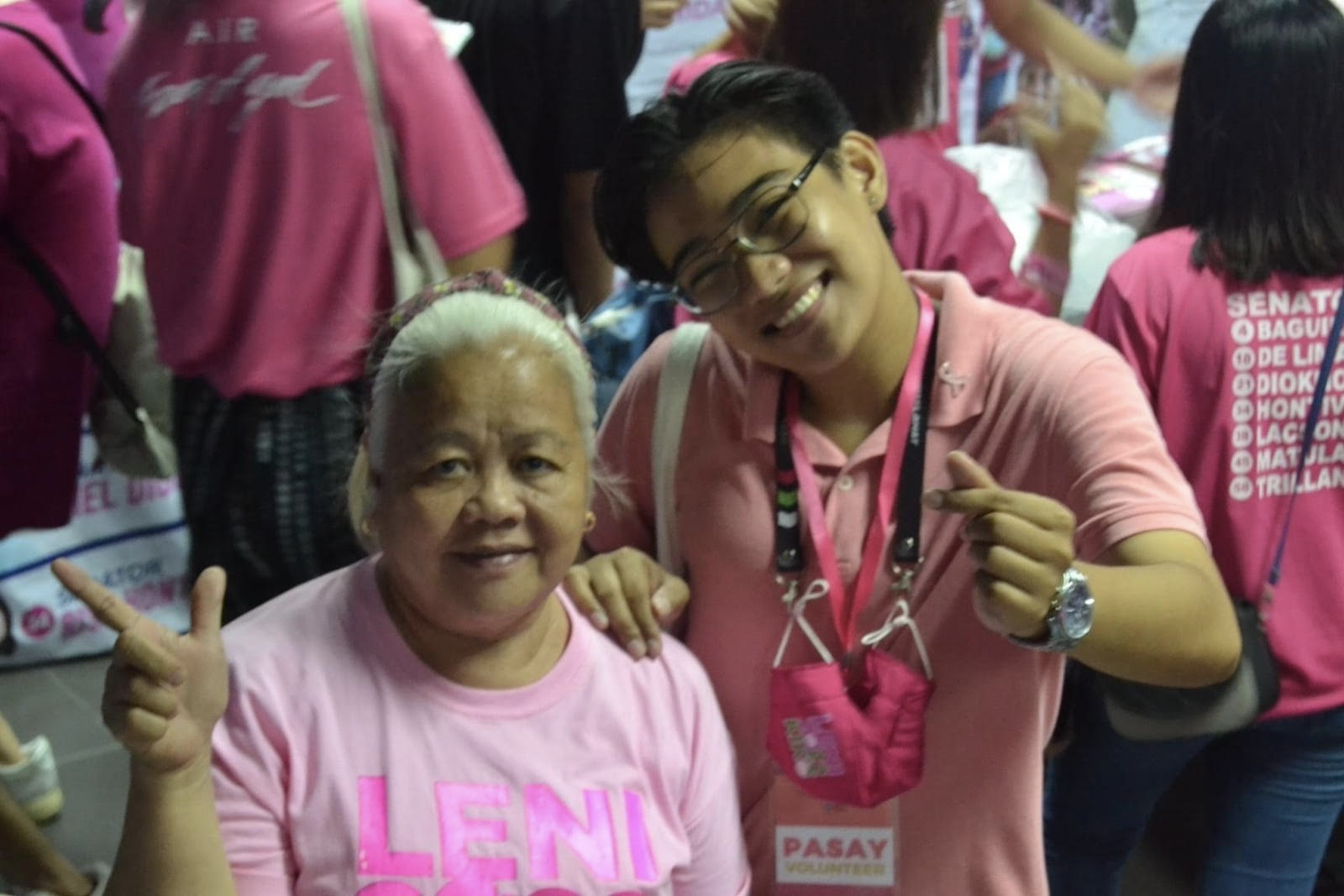 “Never have I indulged myself in events like this but this year, I was impressed by Robredo. I told myself that it’s about time that we, Filipinos, should do our part for the Philippines, especially for our children,” she said.

Delos Reyes said she felt the need to actively take part in Robredo’s bid for the presidency because “I don’t see any future for our children if the kind of government that we have now will persist”.

This was also the reason that 32-year-old JR Hugo, who came all the way from Carmona, Cavite, was in Makati City on Saturday, saying that “this fight is not only for Robredo, it’s for all of us”.

Like Delos Reyes, Hugo told INQUIRER.net that this is the first election that he is actively involved in to campaign for the person he said was the “best”: “I was in Pasig City and Pasay City, too. It was not like this in 2016.” He was referring to the presidential elections that Rodrigo Duterte won.

Jon Gozo, a 24-year-old community organizer, was also one of the estimated 780,000 people who attended Robredo’s last show of force. He told INQUIRER.net that he sacrificed work and graduate school class to be there. 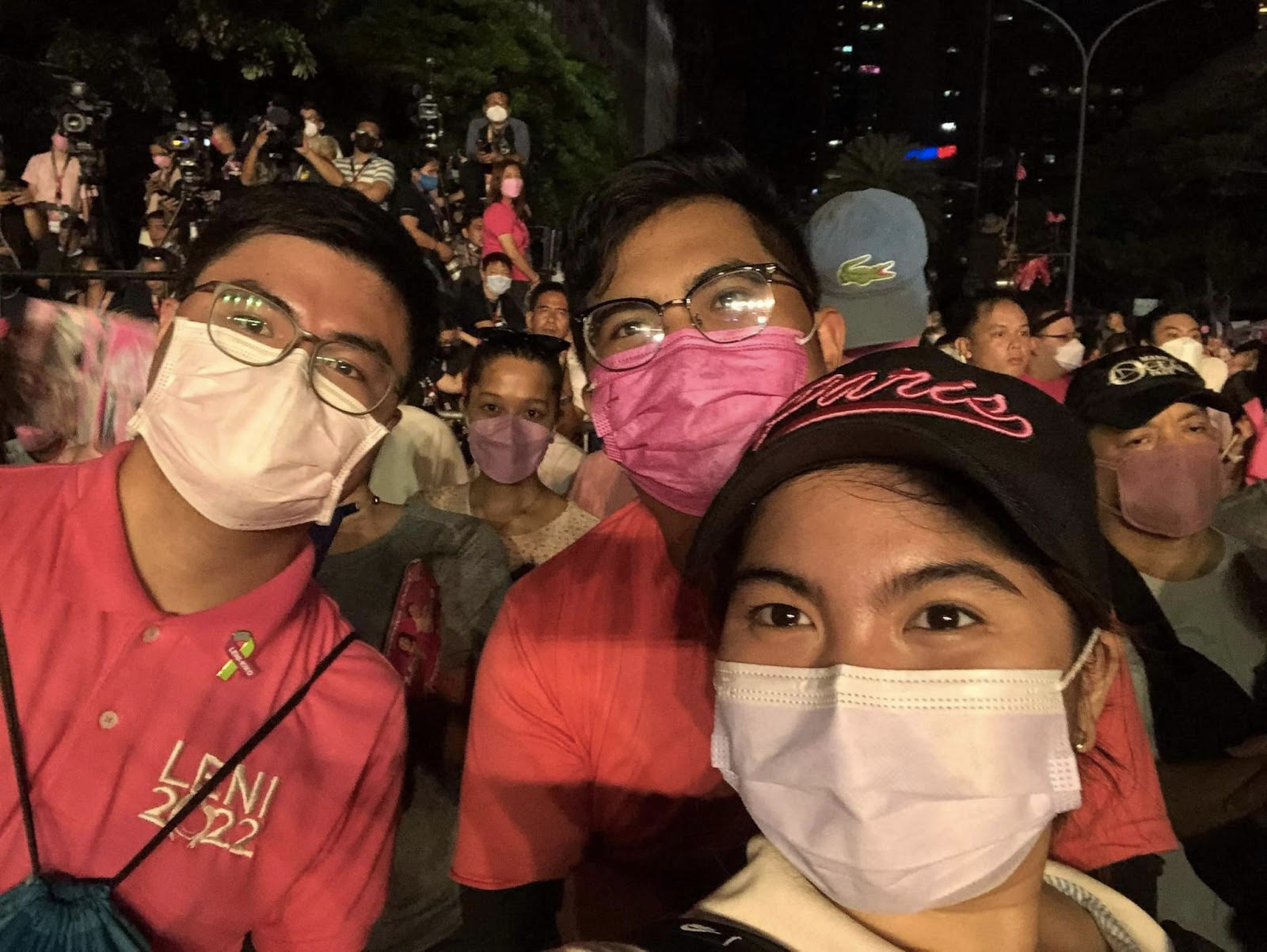 “I filed a leave and I missed an online class because I wanted to be counted, and for the last time, show my full support for Robredo and Pangilinan. Through that, I hope to inspire others and give courage to kakampinks like me,” he said.

Like Gozo, Gerico Cortes, a 24-year-old motorcycle taxi rider, did not let his work hinder his desire to express support for the one he said is the “hope that we have”. The motorcycle that Gerico Cortes uses with pink ribbons. PHOTO FROM GERICO CORTES

“Ever since, I have seen the compassion that Robredo and even her late husband have. That’s why I tied pink ribbons on my motorcycle while traversing the streets of Makati City. It was my simple way of saying that I’m with her in this fight,” he told INQUIRER.net.

It was last March 5 when Robredo had to hitch a ride on the back of a motorcycle to make it to the Cavite rally where 47,000 people were waiting for her. Her chief-of-staff, Philip Dy, said then, “That’s Leni Robredo, she will do everything, she will look for ways”.

Since then, the rider, Sherwin Abdon, has switched to Robredo, giving time, almost every day, to convince voters to back the Vice President as well.

As Robredo, who is trailing former Sen. Ferdinand Marcos Jr. in surveys, made her final pitch, she said, “It’s true that nobody can put down the united strength of the Filipino people. Most of all, there’s always hope.”

“It’s natural for this hope to spread, to flow through each one of us. There is hope in all of us. This is a fire that can’t be put out, a light that guides the way of others,” she said.

Since it was the final day of the 90-day stretch that was set by the Comelec, some supporters saw the miting de avance as a celebration of their tireless efforts in the past three months:

On Oct. 10, 2021, Robredo said her camp received 11,000 registrations for volunteers. Last April 23, her camp said one million volunteers went on a house-to-house campaign to present her programs to voters.