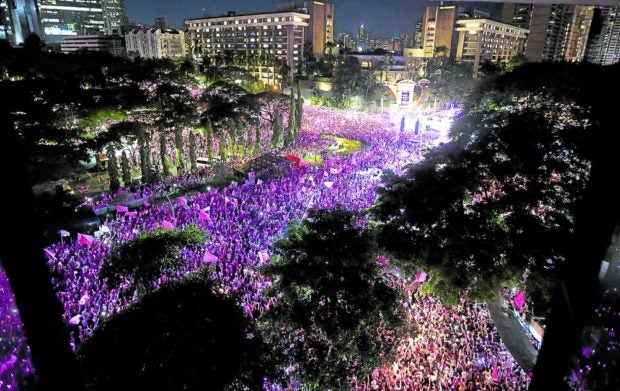 MANILA, Philippines — A pink tsunami of close to 800,000 people swept through the country’s main financial district on Saturday at the end of a punishing 90-day campaign by the widow who defeated the son and namesake of the late ousted dictator for the vice presidency six years ago, and aiming to repeat the feat for the presidency in Monday’s elections.

Up until the end, presidential aspirant and Vice President Leni Robredo’s supporters did not yield a single inch of their spaces of resistance to a return to Malacañang by the dictator’s son as they mounted their biggest show of force for the lone female presidential aspirant.

By 8 p.m., organizers quoting police estimated 615,000 “kakampinks” had descended on the central business district of Makati City for Robredo’s “miting de avance,” occupying the stretch of Ayala Avenue, and its side roads.

They later estimated that the crowd had peaked at 780,000, the biggest that the avenue had seen since yellow confetti rained down from the tall buildings on young urban professionals and members of the business community who massed in indignation against the assassination of Sen. Benigno Aquino Jr. in 1983, three years before dictator Ferdinand Marcos and his family were driven out of Malacañang by a popular revolt.

Their star-studded final campaign rally capped three months of barnstorming across all 17 regions of the country and 68 of 81 provinces.

Robredo reminded her supporters of the need to prevent the return to power of the family that illegally amassed over $10 billion during its reign.

“Each one of you is [living] proof that not everybody was asleep while history was being written,” she said.

Pangilinan praised their volunteers who braved the rains, searing heat, hunger and even harassment in organizing rallies and conducting house-to-house campaigns.

He said most of them were students and young professionals, reminding him of his years as an activist and student leader at the University of the Philippines in the early 1980s.

“We will vigorously oppose anyone who dares to rewrite history,” Pangilinan said.

The Vice President said everyone must remain vigilant, and record and immediately report irregularities they see on Election Day.

“Wear any color you want. Do not fear because there are so many of us,” she said.While Robredo remains second place to Marcos Jr. in the surveys, her supporters are hoping for a big upset on May 9.

One of Robredo’s most influential endorsers, Vice Ganda, made a final speech to rally votes for the Vice President.

“So many Filipinos work to the bone and fight fair but we suffer because but we are being cheated, treated like idiots and dumbed-down so these people can enrich themselves,” he said of traditional politicians. “On Monday let us all express our indignation.”

Actress Anne Curtis and 2018 Miss Universe Catriona Gray made a surprise appearance on the stage set up at the corner of Ayala Avenue and Makati Avenue.

Robredo “is not a leader that comes ever so often,” Gray told the crowd in a stirring speech. “She is a once-a-generation type that can bear change. See how VP Leni has inspired us to come out of our homes to take part in uncomfortable conversations and polarizing situations.”

“You have not just campaigned, you have educated and you have helped,” she added. “Politics can change our lives but we have the power to change the government.”

Curtis told the “madlang people” that she believed that Robredo can lead the country the way a mother raises a child.

She urged Filipinos to pray for a clean and honest elections as well as “healing for hurt relationships among friends and families.”

If the Robredo-Pangilinan supporters were experiencing election anxiety, it certainly did not show in their loud cheers for them and their senatorial candidates. (See related story on Page A3)

Many, including first time voters, camped out on Ayala as early Friday night to make sure they had the best spots for Saturday’s rally.

Some newly minted professionals like Michaela Biscocho, 26, believe that Robredo and Pangilinan can lead the country out of the pandemic.

A civil engineering graduated from the University of the Philippines, Biscocho said the Vice President’s clean track record and comprehensive platform clearly made her the most qualified presidential candidate.

“Considering how the pandemic affected us, it’s important that we elect the right leaders who can find the exact solutions to our problems,” she said. “Robredo has shown us again and again that she can deliver even with a meager budget and even amid the hostility of the administration against her.” Robredo’s sorties often attracts young nonvoters who are anxious about their futures, like 17-year-old Kimberly Fernandez.

Fernandez, who a senior high school student, said it was her right to support a candidate who can best protect the youth’s interests.

“I am often told not to meddle in things like this because I’m too young, but I disagree. I am affected by voter decision. This is my future they are talking about,” she said.

Some kakampinks fear a possible Marcos presidency which ironically can come on the 50th anniversary of the declaration of martial law, which led to the padlocking of Congress, the muzzling the press, the mass arrest of opponents of the regime, and the torture, abduction and disappearance of dissenters.

Irene Perlas, a retired businesswoman, said she could not even imagine another Marcos back in Malacañang “when I have spent most of my years experiencing the difficulties of martial law.”

“Oh my god, have mercy,” said her brother Jimmy Sandoval.

Robredo’s celebrity endorsers pulled out all the stops for her on her last night on the campaign trail.

Three actors who had performed as Mars Ravelo’s Darna—Angel Locsin, Iza Calzado and Jane de Leon—led the crowd in an emotional recital of “Panatang Pilipino” (Pledge of the Filipino), promising to continue holding the line even after the elections.

“Ang aking pagtindig, hindi matatapos ngayong gabi. Lahat ng aking sinasabi, tatapatan ko ng pagsisilbi (My stand will not end tonight. Everything I say I will match with service),” they said. “Asahan mong hindi ito ang huli. Hanggang sa dulo, tayo’y magkakakampi (Know that this is not yet finished. We shall be allies till the end).”

The crowd, with fists raised, repeated the words which reverberated from building to building across the country’s premier financial center.