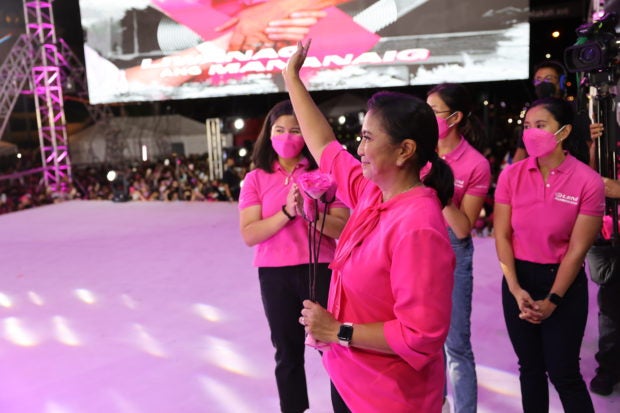 Vice President Leni Robredo with daughters (from left) Jillian, Patricia, and Aika at the Makati miting de avance on Saturday, May 7, 2022. (Photo from the VP Leni Media Bureau)

MANILA, Philippines — For Vice President Leni Robredo — who seems to be forever an underdog during elections — nothing is impossible.

The reason behind it is simple. According to Robredo, she can actually take count of how many attended her briefing last October 7 at her office, where she announced her intention to run for president.

If she can draw huge crowds — over 780,000 along Ayala Avenue for her miting de avance on Saturday, according to local organizers — then she feels impossible tasks may be doable.

“We have learned. Nothing is impossible. When I declared my candidacy, some of you who were there, I can just count them easily in front of me now. but I can’t see at the very end any of the people who are with us now,” she said in Filipino, the predominant language she uses in public addresses.

“It’s true that nobody can put down the united strength of the Filipino people. Most of all, there’s always hope,” she added.

The miting de avance of Robredo in Makati, with her running mate Sen. Francis Pangilinan and her entire senatorial slate, was a fitting send-off as it broke the opposition’s records for the biggest sortie in the 2022 campaign season.

This was way bigger than the birthday rally for Robredo last April 23 in Pasay City, which attracted over 400,000 participants.  More so, it comes on the heels of the over 300,000-strong crowd in Robredo’s hometown, Naga City.

“It’s natural for this hope to spread, to flow through each one of us. There is hope in all of us. This is a fire that can’t be put out, a light that guides the way of others,” Robredo said.

“Tomorrow, it’s no longer allowed to do house-to-house [campaigning]. It’s also not allowed to make public declarations of support. So my request to you is to pray. Be thankful for everyone who has been with your. Free yourselves from doubt and worry,” she added.

Robredo has been a consistent far second according in the surveys, with Pulse Asia’s poll last April 16 to 21 saying showing that she only got 23 percent of the votes if elections were held on that day. In contrast, Marcos got 56 percent.

Still, Robredo’s camp insists that the battle is not lost, with huge crowds assembling wherever the vice resident may be. It also pointed out that data from Google Trends indicate that Robredo has a chance at winning, being the most-searched presidential candidate.