'Kakampinks' in show of force for Robredo in Bicol, NCR as polls near | Inquirer News
Close
menu
search

‘Kakampinks’ in show of force for Robredo in Bicol, NCR as polls near 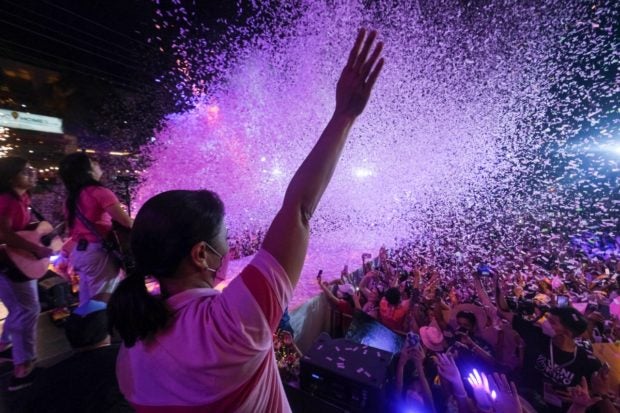 Vice President Leni Robredo, heads into the homestretch of the 2022 campaign season with major rallies in Naga City Friday night (shown above) and Makati City on Saturday. (VPLR Media Bureau)

MANILA, Philippines — Vice President Leni Robredo’s presidential bid drew the expected overwhelming support from the Bicol region on Friday, the homestretch of the campaign period and a few days before the 2022 national elections on Monday.

Local organizers said 40,000 people assembled along Sorsogon City’s Magsaysay Street during a grand rally, highlighted by senatorial candidate and Governor Francis Escudero’s assurance that the Bicol region would be there for its most-celebrated daughter.

Robredo later made her way to Legazpi City in Albay, where she was welcomed by an estimated crowd of over 100,000.

Later in the day in her home city of Naga, rally organizers said over 306,000 individuals trooped to Magsaysay Avenue and its adjacent streets for Robredo’s “miting de avance.”

It seems like a fiesta is being celebrated in Naga City during the miting de avance of VP Leni Robredo and her slate on Friday night, with over 300,000 supporters filling up Magsaysay Avenue.#OurVoteOurFuture #VotePH@inquirerdotnet pic.twitter.com/uWnVoa4wZm

Speaking in Bicolano, Robredo gave a lengthy speech which detailed how she spent her life in Naga City back when her husband, Jesse Robredo was still mayor, how she entered politics after his death, and the counter-arguments to allegations that she cheated in the 2016 vice presidential race.

The Naga City rally is the last campaign activity of Robredo in the Bicol region.  On Saturday, she will be in parts of Central Luzon and will cap her campaign with another  “miting de avance” in Makati City’s Central Business District in Ayala Avenue.