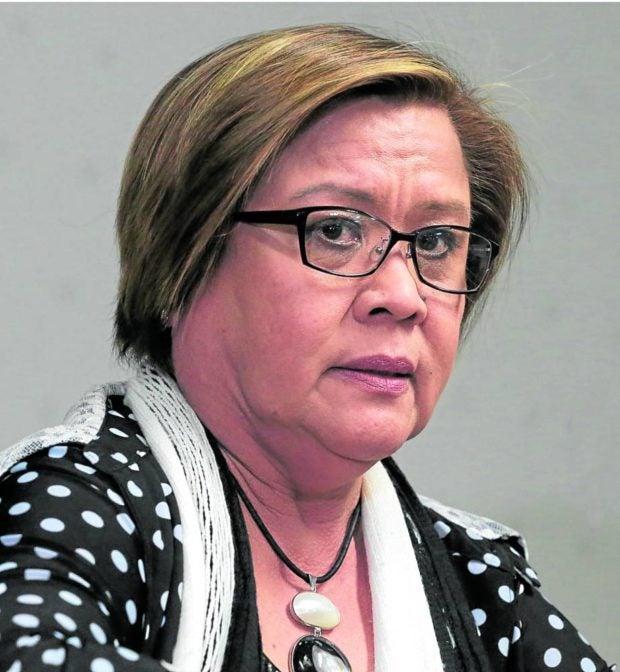 MANILA, Philippines — Detained Senator Leila de Lima formally urged the Department of Justice (DOJ) to review the drug cases against her and to immediately withdraw all these charges should the retraction made by former Bureau of Corrections (BuCor) chief Rafael Ragos be determined as “true.”

In a May 5 letter addressed to DOJ Secretary Menardo Guevarra, De Lima stressed the need to review the drug cases filed against her to “to determine if indeed these were prosecuted by the Panel of Prosecutors even after being told by Ragos that his testimony and all his allegations against me ‘are all lies’.”

Earlier Ragos, a former officer-in-charge of the BuCor, issued an affidavit notarized in Pasig City on April 30, 2022, saying he was “interrogated and coerced” to “admit something that did not happen.”

“In paragraph 28 of said affidavit, it appears that the DOJ Panel of Prosecutors presented Ragos’s testimony in court knowing it to be false and fabricated. Ragos told the prosecutors that they should not expect him ‘to manufacture perfectly plausible testimony because these are all lies’ and that ‘the allegations against Senator De Lima never happened’,” De Lima said in her letter to Guevarra.

“This review should include the other case as well (Criminal Case No. 17-167) because if the Panel of Prosecutors that handles both cases are capable of suborning false testimony in one case, then nothing prevents them from doing the same in the other cases,” she added.

If the review determines that Ragos’ recent statements are “true,” De Lima asked that all cases against her be immediately withdrawn by the DOJ to “prevent a further miscarriage of justice where, even after these revelations indicating prosecutorial misconduct amounting to the criminal offense of subornation of perjury, the DOJ will still continue prosecuting said cases.”

De Lima also asked the DOJ chief to review “glaring facts in these cases which earlier on already indicated a premeditated conspiracy among DOJ and other high government officials to fabricate drug cases against me.”

In her letter, she referred to the following:

“The orchestration by former DOJ Secretary Vitaliano Aguirre Il of the trial by publicity conducted against me both in the House of Representatives and the Senate, and his coercion of DO] employees to admit falsely that they received money and held bank accounts for my benefit;”

“The highly prejudicial and preemptive statements of President Rodrigo Duterte made in public that I am guilty of the allegations manufactured by Aguirre in the House and the Senate, and that he will personally destroy me and make sure that I rot in jail, even before any preliminary investigation was conducted by the DOJ, much less a criminal complaint filed by the BI or private complainants in these cases;”

“The patent favorable treatment given to several Bilibid inmates who, while invariably having admitted to have participated in the Bilibid drug trade, both during the House hearings and in court, were not included as co-accused in the cases against me, despite the panel of prosecutors’ steadfast representation before the courts that none of them are being presented as state witnesses or were granted immunity;”

“The coercion of other Bilibid inmates to testify against me, such as the staged Bilibid Bldg. 14 prison riot in September 2016 which resulted in the near mortal stabbing of Jaybee Sebastian, Peter Co and Vicente Sy, and the death of Tony Co, just days before Sebastian, Co, and Sy were finally “convinced” to testify in the House hearing;” and,

“The recent retraction of Kerwin Espinosa in his counter-affidavit before the NBI, where he categorically stated that he was just forced to implicate me in the drug trade out of fear for his own life.”

READ: De Lima to those ‘used’ in her drug cases: Be like Kerwin

“As Duterte’s term comes to an end, the DOJ can no longer afford to continue being blind to these facts that clearly indicate a pattern of witness coercion and bribery in order to fabricate drug cases against me and send me to jail. I trust that this most urgent matter would merit your earnest attention and action,” De Lima went on.

“Contrary to his claim, I was never involved in coercing him to make statements involving Senator Leila De Lima in the drug trade in the Bilibid prisons,” Aguirre said in a previous statement.

“He presented those statements to me as his voluntary act,” he added, questioning the timing of Ragos’ retraction of allegations against De Lima.

De Lima, a staunch critic of President Rodrigo Duterte, has been detained since February 2017 over what she has repeatedly branded as “trumped-up” drug charges. Early last year, the Muntinlupa Regional Trial Court Branch 205 earlier granted her demurrer to evidence in Case Number 17-166, marking de Lima’s acquittal in one of the three cases, which she called a “moral victory.”