De Lima to those ‘used’ in her drug cases: Be like Kerwin | Inquirer News
Close
menu
search

De Lima to those ‘used’ in her drug cases: Be like Kerwin 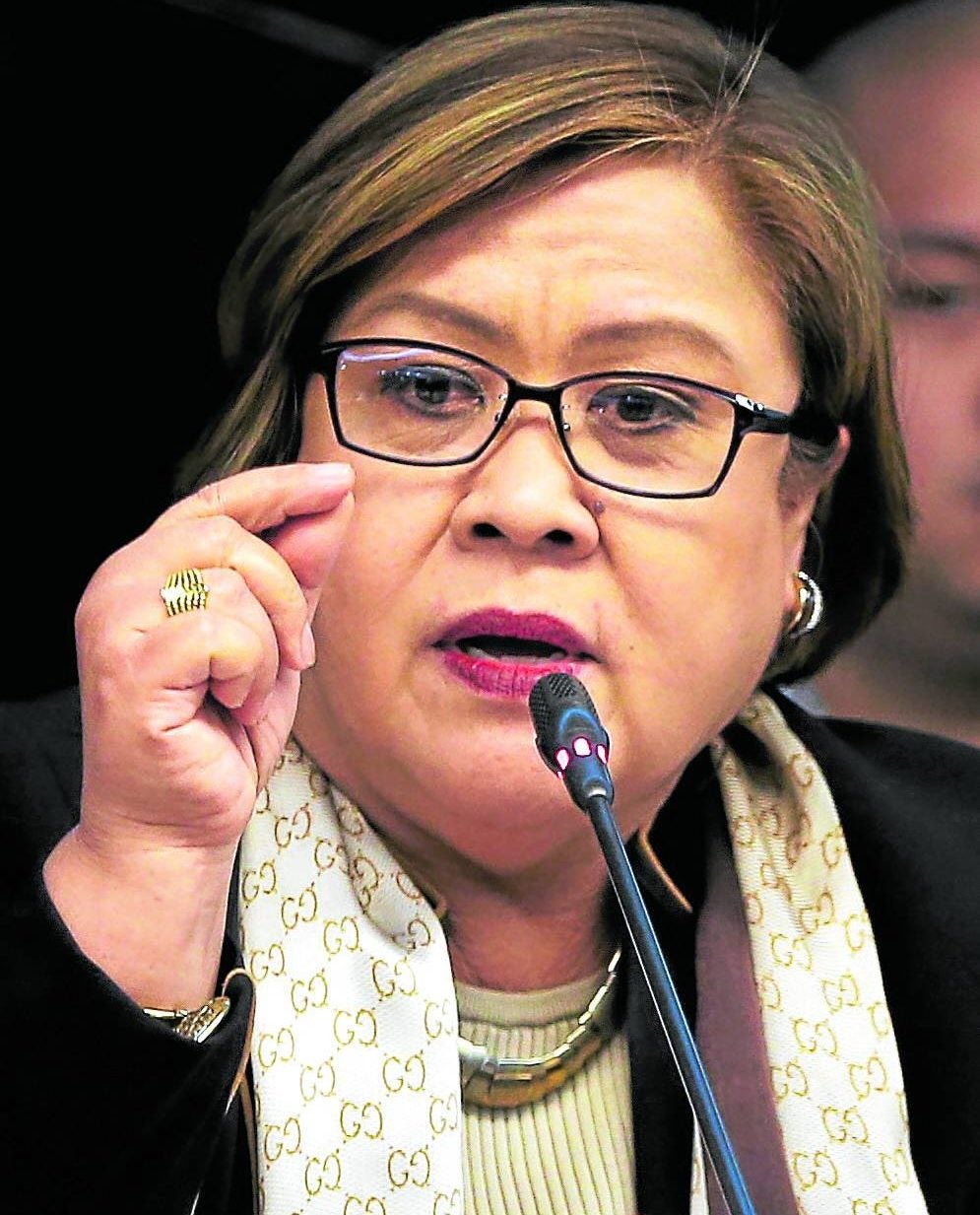 MANILA, Philippines — The long-detained Sen. Leila de Lima on Friday cried for justice and appealed to those with knowledge of the drug charges against her to take a cue from convict Rolan “Kerwin” Espinosa and tell all.

De Lima, who has been held at the Camp Crame Custodial Center since February 2017, said she had forgiven those who were “used” to attack her, including Espinosa, a confessed drug lord who has recanted his allegations against her and apologized for implicating her in the trade in illegal drugs at the New Bilibid Prison during her term as justice secretary in the previous administration.

“I have long forgiven and left to God those who were used or allowed themselves to be used for the lies against me—those who were threatened, paid, blackmailed or promised money or whichever privilege,” the senator, who is seeking reelection, said in a series of tweets.

“I am urging everyone who took part in the cruelty against me to follow suit and reveal all they know,” she said in Filipino. “The truth is coming out. Justice is getting close. My wish: To make those behind this accountable. My loudest cry: Justice!”

Espinosa will be charged with perjury for backtracking on his testimony against De Lima, according to Justice Secretary Menardo Guevarra.

“Whether or not his testimony is material to the prosecution’s cause, making false statements under oath is a criminal offense,” Guevarra told reporters.

Dino de Leon, a lawyer for De Lima, said her camp was considering tapping Espinosa to serve as its witness in the two remaining cases being heard at the Muntinlupa City Regional Trial Court (RTC) Branches 205 and 256.

“He is not a witness of the prosecution, but he could be our witness to paint a clear picture of the political persecution of Senator De Lima,” De Leon said in a TV interview.In a counteraffidavit, a copy of which was released to the media on Thursday, Espinosa said he made the allegations against De Lima in two Senate hearings in 2016 because he was “misled by the police” into signing a sworn statement in exchange for the dropping of his own drug cases.

“Any statement he made against the senator are false, and was the result only of pressure, coercion, intimidation and serious threats to his life and family members from the police, who instructed him to implicate Senator De Lima in the illegal drug trade,” he said, referring to himself in the third person. “For this, undersigned apologizes to Senator De Lima.”

De Lima’s camp has accused President Duterte’s administration of fabricating the drug charges against her because of her criticism of the war on drugs and his supposed grudge as a result of her past work in the Commission on Human Rights and the Department of Justice (DOJ).

In a dispatch from Camp Crame, De Lima expressed vindication over Espinosa’s retraction. “As I have always been saying, all allegations against me invented by the Duterte machine of lies and fabrications would ultimately unravel,” she said.

Espinosa’s counteraffidavit “only proves the lengths Duterte and his minions, inside and outside of the DOJ, have gone to fabricate testimony and evidence against me, to fulfill Duterte’s deep-seated personal vendetta,” De Lima said.

She added: “I have been languishing in jail for the past five years on the basis of testimonies of convicted criminals who, like Kerwin Espinosa, were used by the DOJ to manufacture lies about me and about crimes that I did not commit.

“As Duterte steps down from power, more of these convict-witnesses are only expected to come out and confess that they were intimidated, coerced, or bribed into making up the ridiculous and impossible story that I received money from the illegal drug trade. I also expect them to reveal the names of Duterte’s officials who participated in this gross frame-up, so I can also finally bring these people to account for what they have done to me.”

‘He has to prove it’

Asked if the DOJ would look into Espinosa’s claim that he was forced by police to implicate De Lima, Guevarra said: “We will determine that when he faces perjury charges.”

As to the veracity of the drug convict’s counteraffidavit, Guevarra said: “Of course, he has to prove it.”

In a statement, the DOJ shrugged off Espinosa’s claims, saying his recantation “bears no weight” to the cases against De Lima.

It pointed out that Espinosa retracted his testimony more than five years since he made it, and that “this glaring delay” made his “truthfulness and motive” questionable.

The DOJ said Espinosa’s retraction “will not, in any way, affect the pending drug cases” against De Lima.

Besides, it said, his previous affidavits “were never utilized and will not be used” by government prosecutors in De Lima’s two remaining cases being heard in the Muntinlupa courts.

Espinosa was not among the witnesses, numbering at least 25, presented by state prosecutors in the two cases. Defense witnesses have yet to take the stand in both cases.

De Leon told CNN Philippines that while Espinosa was not a witness for the prosecution, his recantation presented “a bigger picture … that witnesses [tapped to implicate De Lima] are under threat and duress.”

“It is now the responsibility of the [DOJ] to make sure that he is safe, and that his testimony remains intact,” De Leon said.

“Kerwin Espinosa is a mere pawn in this political persecution of Senator De Lima. He was used by the administration, by [Mr.] Duterte, who himself categorically stated that he would destroy her,” the lawyer said.

Espinosa is detained at Camp Bagong Diwa in Taguig City.

He has criminal cases pending at RTC branches in the cities of Manila, Makati, Pasay, Cebu and Ormoc City.

Espinosa was initially tapped to serve as state witness. But Guevarra terminated his coverage under the Witness Protection, Security and Benefit Program “in view of continued commitment of various violations inside the detention facility” at the National Bureau of Investigation in Manila.

De Leon said De Lima’s camp was happy with Espinosa’s retraction, but saddened that it took five years for it to happen.

In a statement, Boni Tacardon, another of De Lima’s lawyers, said: “We should look at Espinosa’s counteraffidavit as an eye-opener for other witnesses who also experienced coercion and intimidation for them to release statements implicating [the senator].”

“May they join Kerwin in embracing the truth, and tell the public what prompted them to testify against [her],” Tacardon said.

In Malacañang, acting presidential spokesperson Martin Andanar issued a statement quoting Prosecutor General Benedicto Malcontento as saying that Espinosa’s recantation “will not have any effect on the pending criminal cases against the lady senator.”

At the Laging Handa briefing, Justice Undersecretary Adrian Sugay also said as much, and echoed Guevarra’s remark on a possible perjury case against Espinosa.

But Phil Robertson, deputy Asia director for the New York-based HRW, called on Philippine authorities to release De Lima “immediately” and dismiss the “trumped-up” charges that led to her arrest.

“Espinosa’s revelation exposes how the Duterte administration manipulated the Philippines’ criminal justice system against a sitting senator who was critical of the ‘war on drugs’ and had sought the truth about thousands of killings,” Robertson said in a statement.

Butch Olano, AI Philippines section director, noted how AI had “repeatedly” called the charges against De Lima as “fabricated,” and the testimony by witnesses “manufactured.”

“Following this retraction, the government must immediately and unconditionally release her and hold accountable those responsible for her unjust detention and the various human rights violations she has had to endure,” Olano said.

Presidential candidate Leody de Guzman and his running mate Walden Bello also demanded the release of De Lima, who is included in their senatorial ticket.

Bello said their campaign’s “key elements” included “the unconditional release of this long-suffering victim of a frame-up based on nothing else but the President’s vindictiveness.”

Presidential candidate Manny Pacquiao called for a speedy resolution of the cases against De Lima and said he would review a video of his early interview with Espinosa to see if the convict was lying then or now.

“It’s time to put an end to that case because our senator has been detained for so long,” Pacquiao told reporters in a campaign sortie in Ormoc City.

Makabayan senatorial candidate Neri Colmenares added his voice to the calls for De Lima’s release, and said the cops who coerced Espinosa into implicating her should now be charged in court for their action.

Colmenares added: “This is further proof of the propensity of the police to plant evidence and manufacture false testimony. This is a staple underhanded tactic used against critics of the Duterte administration to imprison and silence them.” —With reports from Julie M. Aurelio, Dempsey Reyes and Nestor Corrales