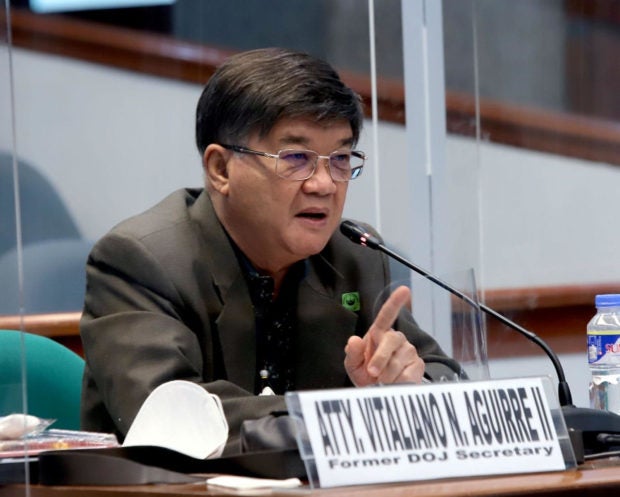 “Mr. Rafael Ragos is downright lying! Contrary to his claim, I was never involved in coercing him to make statements involving Senator Leila De Lima in the drug trade in the Bilibid prisons,” Aguirre said in a statement dated May 3, Tuesday and released to reporters on Wednesday.

“He presented those statements to me as his voluntary act,” he added, questioning the timing of Ragos’ retraction of allegations against Senator Leila de Lima.

“As a lawyer, allow me to state that it is a time honored rule that retractions are unreliable unless backed up by incontrovertible evidence. As it is, devoid of any reliable back-up, the statement of Mr. Ragos is a worthless piece of paper,” he further said.

Earlier Ragos, a former officer-in-charge of the BuCor, issued an affidavit notarized in Pasig City on April 30, 2022, saying that Aguirre “interrogated and coerced” him to “admit something that did not happen.”

But Aguirre said he was “genuinely surprised” at Ragos’ claim.

“It is farthest from the truth, I was never involved in any efforts to coerce him. Mr. Ragos has always made it clear to me that his statements are true and he was voluntary offering them to us to correct an injustice and to tell the truth,” the former justice secretary said.

“Mr. Ragos testified under oath on September 20, 2016 and on October 10, 2016 before the House of Representatives to matters subject of his retraction. Mr. Ragos likewise testified before the Senate of the Philippines on the same matters,” he noted.

Aguirre further said he was no longer with the Department of Justice (DOJ) when Ragos testified in 2019 before the Regional Trial Court of Muntinlupa where he reiterated his earlier testimony in the House of Representatives and his allegations against De Lima in his affidavits.

“Likewise, Mr. Ragos had about five (5) case conferences with the DOJ Prosecutors handling the case before his testimony before the Muntinlupa RTC and there was no mention of coercion or retraction,” he added.

“In addition, Jovencio Ablen Jr., the NBI agent implicated by Mr. Ragos as being involved in the drug trade in the Bilibid prisons has maintained his allegations against Senator De Lima. This brings me to my next question, why only now?” Aguirre also said.

Aguirre questioned Ragos’ motive for retracting his earlier statements against De Lima, pointing to the May 9 polls and De Lima survey numbers.

“Is it possible that Mr. Ragos is being used as a pawn in last ditch efforts to gain sympathy from voters? As to the motives of Mr. Ragos, we can only surmise. However, I know for a fact that he was asking for payment of back pay during the time that he was not receiving his regular pay but he did not receive any,” Aguirre said.

“It also came to my knowledge that Mr. Ragos was asking to be appointed to some government post but he was ignored. Clearly, Mr. Ragos is a man with a grudge,” he added.

In retracting his allegations against De Lima, Ragos told reporters he wanted to “clear something that has been on my chest since this has been concealed for so long.”

“It doesn’t matter if these people would get mad at me, what matters here is the truth. Those who did wrongdoings would be mad. What do I care?” Ragos had said.

READ: DOJ to tap Ombudsman to act on Ragos affidavit

Ragos’ recantation followed that of Kerwin Espinosa, who retracted his allegations that also tagged De Lima in the illegal drug trade in the New Bilibid Prison.

De Lima, a staunch critic of President Rodrigo Duterte, has been detained since February 2017 over what she has repeatedly branded as “trumped-up” drug charges.

The Muntinlupa Regional Trial Court Branch 205 earlier granted her demurrer to evidence in Case Number 17-166, marking her acquittal in one of the three cases, which she called a “moral victory.”