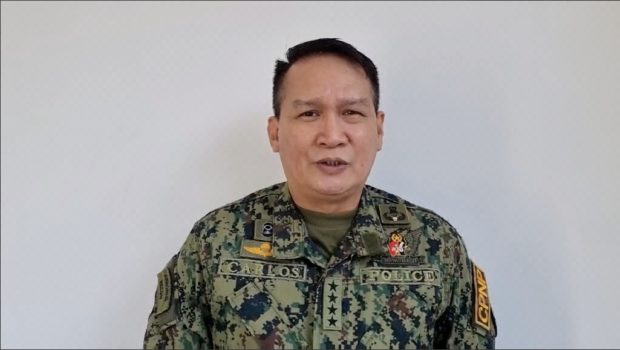 MANILA, Philippines — Philippine National Police (PNP) chief Gen. Dionardo Carlos has assured residents of Pilar town in Abra that police officers who would be reassigned to the town, following the relief of the entire police office, are familiar with the area.

Carlos during a press briefing on Wednesday said that they are looking to assign people from the Police Regional Office Cordillera (PRO-COR) Regional Mobile Force Battalion to man the area, which was recently placed under the control of the Commission on Elections (Comelec) for the 2022 general elections.

“Normally coming from the Mobile Force, or the Regional Mobile Force, or somebody who has been assigned before in the area, in the town of Pilar.  So hindi po magiging problema ‘yan, we can immediately adjust,” he added.

But for other areas, Carlos said that PNP personnel would stay put as these officers have been already trained to address concerns in these locales come election time.  However, he promised that the PNP would look into possible complaints filed by political camps about allegedly partisan police officers.

Earlier, Comelec placed Pilar, Abra under Comelec control after hearing reports that local police in the area were supposedly biased towards a particular camp.

It could be remembered that Comelec previously classified Pilar as a “red” area of concern — the highest in the polling body’s standards — after the shootout between the security team of Pilar Mayor Jaja Josefina Disono and local police officers.

The standoff happened last March 29, after armed individuals moved past a PNP checkpoint while allegedly opening fire at some officers.  The armed convoy then moved to Disono’s residence.

Carlos assured the public that the incident involving the encounter between the Pilar police and the armed individuals are two different issues.

“With regards to Pilar, Abra, the instruction, the directive of the (Comelec) Chair is to replace the Pilar MPS personnel, so I already texted regional director (Brig. Gen.) Ronald Lee to implement the order of the Chair, because Pilar, Abra is now under Comelec Control,” Carlos said.

Aside from Pilar town and Misamis Occidental, Comelec has already placed under its control the towns of Buluan, Datu Odin Sinsuat, Datu Piang, Mangudadatu, Pandag, and Sultan Kudarat in Maguindanao; Marawi City, Malabang, Tubaran, and Maguing in Lanao del Sur.

The Comelec’s decision, the body said, was because of potential election-related violence in the said areas.