Ex-DOJ chief Aguirre dares Ragos: File a case against me 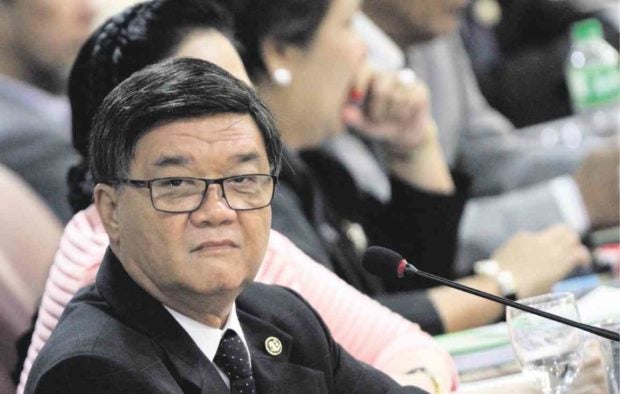 Ragos, in an affidavit, has accused Aguirre of threatening and coercing him to make up a story that de Lima is involved in the illegal drug trade inside the New Bilibid Prison.

Ragos said he was coerced “to admit something that did not happen.”

His previous affidavit alleged that he, together with Jovencio Ablen Jr. has delivered a total of P10-million Bilibid drug transaction proceeds to De Lima, which was received by her aide Ronnie Dayan.

However, he issued another statement over the weekend saying that his previous affidavit was done under duress

“Mr. Rafael Ragos is downright lying! Contrary to his claim, I was never involved in coercing him to make statements involving Senator Leila De Lima in the drug trade in the Bilibid prisons,” Aguirre said.

Aguirre, in an interview said Ragos came up to him after he was tagged by a fellow witness Jovencio Ablen Jr. as his companion in delivering a total of P10-million Bilibid drug transaction proceeds to de Lima, which was received by her aide Ronnie Dayan.

The former DOJ Chief said he only met Ragos twice. He said he was never part of the interview process to determine the testimony of Ragos.

“I asked the procedutors to do it,” he said.

Initially, Ragos was included as accused but he filed a motion for reconsideration which was the reason why he was dropped from the case and became a witness.

Aguirre said why did it took Ragos almost five years to issue a retraction.

He said Ragos has affirmed the truthfulness of his affidavit more than eight times–first during the hearing at the House of Representatives. Then, in 2019, he testified before the Muntinlupa Regional Trial Court for four times.

“I resigned from the DOJ on April 5, 2018. He testified in court in 2019,  I was no longer justice secretary. I was no longer in the government,” Aguirre said adding that how can he coerce Ragos, a lawyer, a former official of the NBI, an officer–in-charge of the Bureau of Corrections.

Aguirre added that when Ragos testified at the Senate also a year after he left the DOJ, “I was told he gave additional facts which was not in his previous testimonies.

“He was very spontaneous. At the House of Representatives, not one noticed that he was under duress,” Aguirre said.

“So, kalokohan talaga yang sinasabi nya na ako ay in a position to threaten him,” he said adding that recantation is not being looked upon with favor by the Supreme Court unless it is backed up by controvertible evidence.

In this case, he said Ragos has not offered any evidence, not even details of how he was coerced, said Aguirre.

Earlier, Justice Secretary Menardo Guevarra said once received a copy of Ragos’ affidavit, they will refer it to the Office of the Ombudsman for proper action.

Aguirre said he will welcome any action that will be undertaken by the Department of Justice.

“Ok lang yun. Hinahamon ko [I challenge] those people behind Ragos, file the necessary charge. I am willing to face the charges,” he said.

He said there are probably people behind Ragos.

DOJ to tap Ombudsman to act on Ragos affidavit