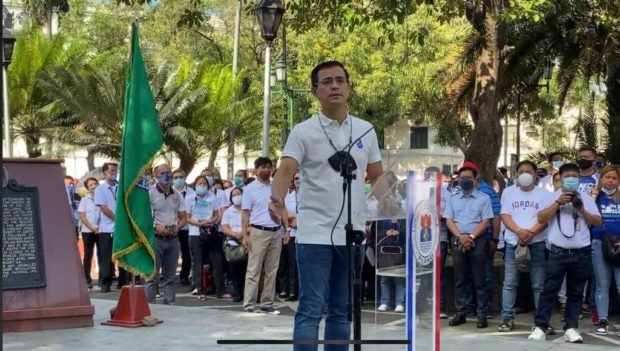 MANILA, Philippines — Aksyon Demokratiko presidential candidate Isko Moreno Domagoso on Monday displayed the true character of a righteous and fair-minded leader when he stressed to Manileños their constitutional right to choose whoever they think is rightful to lead the country in the May 9 elections.

The 47-year-old local chief executive said that it is his only hope that his constituents, as well as all Filipinos, will be guided by God and their own sense of judiciousness in their choice of candidate.

Having said that, the Aksyon Demokratiko standard bearer urged the people to look not in the past, but to look towards the future in contemplating their votes.

Moreno again called on the people to put a stop on the decades-long conflict between the Marcoses and the Aquinos, to vote for a candidate who will give them peace of mind and a chance for a better life.

Moreno said what happened recently at a posh mall in Makati City where supporters of his rivals Vice President Leni Robredo and former Senator Ferdinand “Bongbong” Marcos had a shouting match is just a preview of what things to come for the country if either one of them becomes president.

“Huwag tayong papayag na magpatuloy ang away ng dalawang kulay. While we respect what happened in 1986, I for one, and I can only speak for myself, we cannot live in 1986. I can live today in 2022, and work hard for my family, the betterment of my children, our future, your future. You deserve it. Everyone deserves it. Karapatan niyo yon. Makapamuhay sa kasalukuyan para sa kinabukasan,” he said.

If people want equality, inclusivity and peace of mind under a fair and honest government, one only has to look at Manila to see what kind of leadership he is bringing to the table.

Upon assuming office in 2019, Moreno appointed and even promoted those who were known to have supported his rivals. His social programs also do not distinguish between rich or poor, nor any political color.

But be that as it may, Moreno said he will respect whatever choice they make, as everyone should in a real democracy.

“Magnilay-nilay kayo. Uulitin ko, gusto niyo pula, I love you. Gusto niyo dilaw, I still love you. But if you want peace of mind, I love you more,” he said.