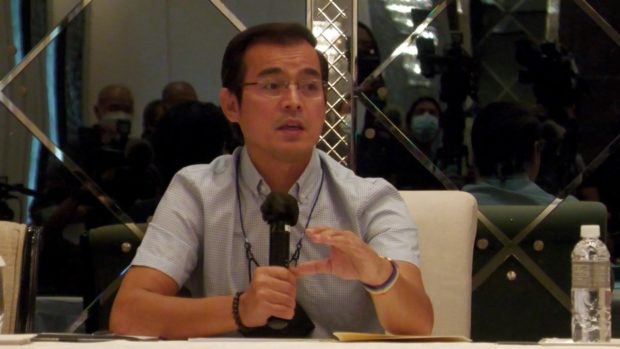 ANGONO, Rizal — Presidential candidate Francisco “Isko Moreno” Domagoso has urged those who were intimated by what he called “pink bullies” to join forces with him and fight these “condescending” people.

Moreno’s rants against rival presidential bet Vice President Leni Robredo and her camp appeared to be far from over, as he continued with his verbal assault during an interview here on Thursday.

The Aksyon Demokratiko’s standard-bearer and incumbent mayor of Manila has even called Robredo “the Godmother of all bullies.”

“When you allow [bullying], you’re also the biggest bully. You’re the godfather of [the bullies], in this case, godmother,” Moreno also said in another ambush interview on Wednesday.

But Robredo won’t respond to Moreno’s tirades, choosing to instead keep the focus on her presidential campaign.

READ: Robredo: Let’s not dwell on Isko rant; polls bigger than two of us

“Hindi na tayo magse-spend ng time makipag-away sa ibang kandidato,” she said during an ambush interview on the sidelines of her rally at Bogo City in Cebu on Thursday.

(I would rather not spend time fighting other candidates.)

(I am not picking a fight, I am just stating facts that they are bullies.)

Moreno calls on Robredo to withdraw from presidential race

Robredo did not make any withdrawal call – spokesperson